A match pass, costing the equivalent of just £5.00, will allow overseas fans to choose specific Sky Bet EFL matches to watch during the regular league season and offers fans greater choice in how they follow Bradford City.

The subscription offer is available ahead of this coming weekend, which sees City travel away to Walsall at the Banks's Stadium live on iFollow on Saturday, 26th August. 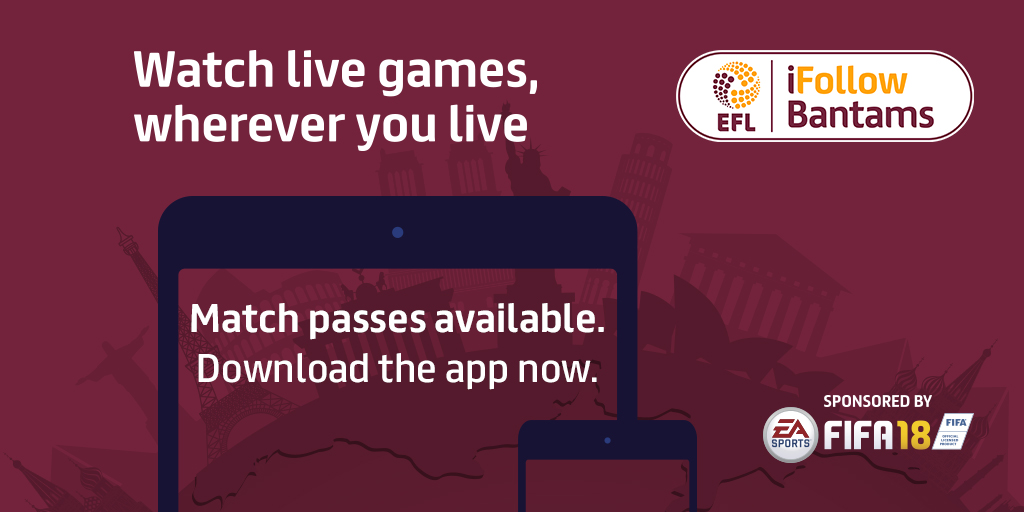 Additionally, City has also launched a new official club app which is available for free from the App Store and Google Play Store.

Fans must download the official app in order to live stream any match via iFollow when using an iOS (Apple Store) and Android (Google Play Store) device.

iFollow is, for the first time in English football, enabling EFL fans based outside the UK and Republic of Ireland to watch their team during the regular Sky Bet EFL season.

With an estimated 270,000 EFL fans based outside the UK, iFollow will allow clubs to enable their supporters to follow the action wherever they are in the world.

More than 1,500 matches will be available in HD quality, with iFollow showing every EFL league match live unless that match has been selected by the EFL’s overseas broadcast partners.

Fans based in the UK and Republic of Ireland will still also have access to live audio commentary, highlights packages and exclusive content as part of the new offering, rebranded to replace the EFL’s previous PlayerHD platform.