Bantams boss Stuart McCall was pleased to see City overcome a tricky opening day encounter with Blackpool to secure their first victory of the 2017/2018 campaign.

A debut goal from young striking sensation Omari Patrick proved enough to help claim a 2-1 victory for McCall's men in front of the home support at the Northern Commercials Stadium.

In truth, City were far from their best in the first period, but McCall was encouraged to see his side respond from their rusty start and kick on for the win.

McCall said: "I have to say that I didn't enjoy the first half from us.

"There was a little bit of edginess from us and our passing from back to front wasn't good enough.

"They also played three at the back with wing backs that didn't get forward much, but we will have to deal with that because teams are going to come here and set-up in similar ways this season.

"We needed to get better in the second half, and we did.

"Your first home game of the season is all about getting the three points. Our second half display probably meant we merited the win.

"We have some young players who maybe need a bit of coaching and advice to get them in the right areas, but there is definitely more to come from the lads.

"Shay (McCartan) and Omari (Patrick) can keep improving, Dom Poleon came off the bench and looked bright - he will keep getting stronger.

"Alex Jones missed a bit of pre-season as well - he will get stronger too - and we have Charlie (Wyke) and Tayls (Paul Taylor) to come back in.

"We know we have to improve overall but the pleasing thing was that we got better as the game went on.

"I must thank the fans for that as well. It would have been easy for them to get on the players' backs after the first half.

"We had a couple of chances at the start of the second period though, and the crowd really responded and lifted the lads.

"Once we get to 2-1, I think we looked as comfortable as you can do with such a narrow margin, but the backing of the players from the fans to begin with was key." 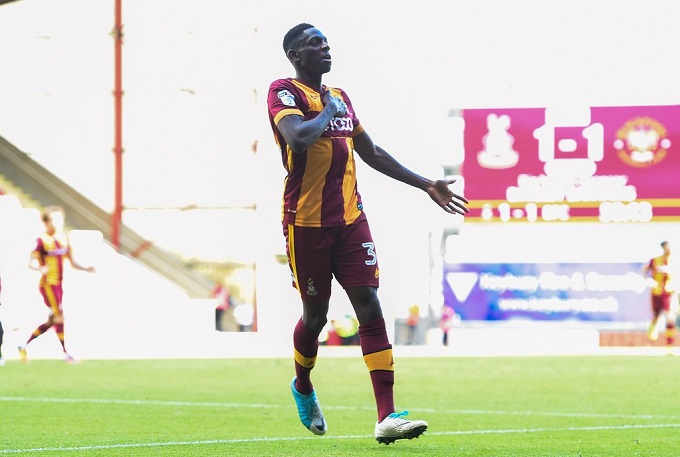 Patrick's match-winner was his first senior goal in football and it came on his maiden outing at EFL level.

McCall said: "He was probably one of the first names on the team-sheet today (Saturday) to be honest due to his efforts in pre-season.

"He came away with us to Austria and Germany and did really well, and he's kicked on from there.

"We were fortunate enough to be able to have a look at him towards the end of last season when he was leaving Barnsley, and we thought he had something we could work with.

"It was a sweet strike by him, and I think his confidence grew even more after that.

"He will keep his feet on the ground but the standard has been set now for the rest of the season."

After Patrick's heroics and City's maiden victory of the new campaign, the only down point of the afternoon came in the first period when debutant Adam Chicksen sadly had to be stretchered off.

Chicksen was knocked unconscious following an aerial clash with Blackpool's Oliver Turton, resulting in a delay of almost ten minutes.

McCall added: "The good news is that he is improving.

"He was out for a few minutes and also struggling to breath at one stage so he needed some oxygen.

"There was obviously some concern for him on the pitch at the time.

"I went to see him as he was being stretchered off the pitch and he was at least awake at that time and knew where he was.

"He was talking in the ambulance as he went to hospital. We've also been able to talk to him after the game and he seemed quite chirpy.

"He was asking about the score and obviously pleased that we'd won.

"He is going for scans this evening but he hopefully seems ok. He will get checks on his neck and brain.

"We are hopeful it will be positive news and nothing serious.

"Going ahead from a football point of view, he will definitely miss the next couple of weeks due to the rules about concussions."