The Bantams ended their time abroad by picking up a relatively routine victory over German side TV Echterdingen in their latest pre-season friendly this Saturday.

After a week training at their temporary base in Austria, Stuart McCall's men claimed a 4-1 success at Echterdingen's Sportpark Goldacker ground on the outskirts of Stuttgart.

Echterdingen actually took the lead through a stunning effort from distance by Meksud Colic, but Timothee Dieng responded for City with a long-range effort into the bottom corner to level the scores up at the break.

McCall's side looked in complete control after the break, dominating the whole of the second period.

The Bantams' dominance in the match was rewarded twelve minutes from the end when Shay McCartan fired home from close range to give City the lead.

Further goals later in the half from Omari Patrick and Daniel Pybus - both scored on the rebound - added some deserved gloss to the scoreline.

For the second friendly in succession, McCall named a different side per half, giving the vast majority of his squad 45 minutes each.

With Charlie Wyke rested as a precaution due to a tight hamstring, however, Daniel Devine and Patrick would go on to feature in the first and second periods.

In front of his watching parents, German Rouven Sattelmaier was named City's captain for the first period for the game in his native country.

Dominic Poleon and Patrick forced early saves out of home 'keeper Hiroaki Kawama but it was Echterdingen who took a surprise lead midway through the opening period.

Echterdingen striker Colic took aim as the ball bounced kindly into his path some distance from goal before proceeding to fire a superb looping effort on the half-volley into the net and over the head of the helpless Sattelmaier.

As City aimed to bounce back, Patrick saw another effort in the game pushed away by Kawama, while Dieng narrowly missed the target with a strike from outside the box.

The Frenchman got his radar spot on with his next shot though, the midfielder finding the bottom corner with a shot from distance to level things up six minutes from the interval.

Pybus, one of ten changes made by City at the break, started the second period in positive fashion as he saw an angled drive pushed away by Kawama.

The former Sunderland midfielder then looked to turn provider just minutes later but his driven ball across the six yard box was somehow put over by Paul Taylor.

Pybus was again involved later into the half when his cross found Patrick, who volleyed hard for goal but the effort was parried away by Kawama.

City did get on the scoreline for the second time in the afternoon shortly afterwards, however.

Jake Reeves' impressive through-ball found McCartan in space inside the box and the striker finished off the move neatly by rounding Kawama and slotting home.

Alex Gilliead could have got himself on the score-sheet eight minutes from the end when the ball dropped to him in the box but Kawama produced a great reaction save to tip the deflected effort onto the bar.

As the game moved into its final stages, there was still time for City to net two further goals. 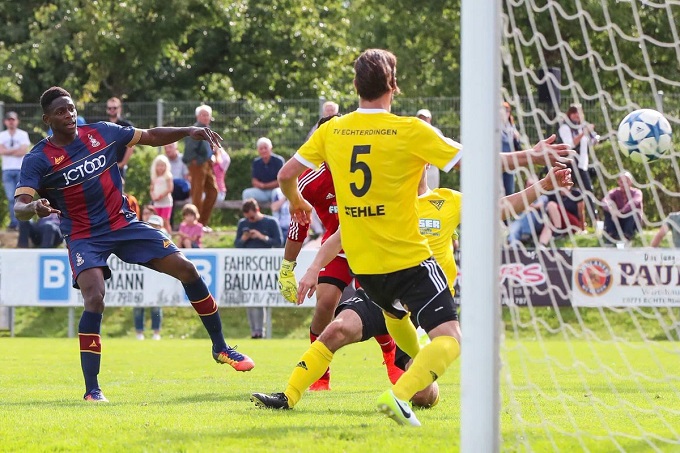 The Bantams' third came as a result of bright play from Patrick.

The young attacker was on hand to fire home the rebound after cutting inside from the left and seeing his initial shot parried.

Pybus' goal also came as a result of good reactions.

His first effort on goal from inside the box was hacked clear off the line by Timo Stehle but the midfielder was still able to drive the ball in at the second attempt.