The Bantams will begin their 2017/18 Sky Bet League One campaign with a home fixture against newly promoted Blackpool at the Northern Commercials Stadium on Saturday 5th August 2017.

The final day of the season on Saturday 5th May 2018 will see the Bantams make a short trip to Lincolnshire to take on Scunthorpe United at Glanford Park.

City have two Yorkshire derbies this season with Doncaster Rovers and Rotherham United new to the league after respective promotions and relegations. The home fixture against the Millers is on Saturday 16th September 2017 with the return in South Yorkshire on Saturday 6th January 2018.

We play host to Darren Ferguson's Doncaster on Saturday 30th September 2017 before a trip to the Keepmoat Stadium on Saturday 17th March 2018 (St.Patrick's Day).

The Bantams make their first trip to Blackburn Rovers in over 28 years over the Easter Weekend (Saturday 31st March 2018) before welcoming Walsall on Easter Monday (Monday 2nd April 2018) to the Northern Commercials Stadium.

City's last home fixture of the 2017/18 campaign will be played on Saturday 28th April 2018 when Southend United are the visitors to the Northern Commercials Stadium. 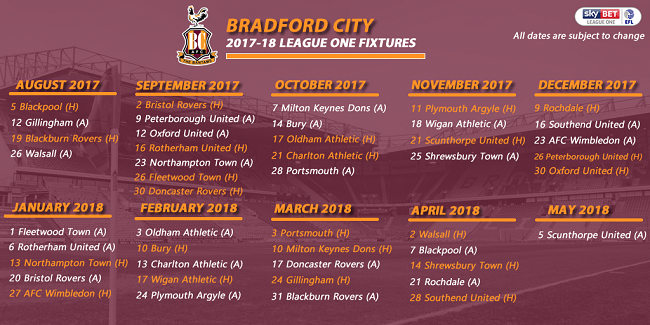