The Club's new film documentary 'Matter of Heart' was shown to the public in full for the very first time at its official premiere at the National Science & Media Museum this Tuesday evening.

Invited guests and sponsors got their maiden opportunity to watch the candid and thought-provoking documentary in the Pictureville Cinema inside the Bradford-based museum.

Joint-owners Stefan Rupp and Edin Rahic were on hand to introduce the 'Matter of Heart' production which details their first full season in control at the Northern Commercials Stadium.

The documentary shows from the very beginning the reasons for Edin and Stefan deciding to become the first German owners of an English football club, all the way through to City's appearance at Wembley in the Sky Bet League One Play-Off Final.

Speaking at the premiere, Mr Rahic said: "I hope those watching it found it honest and authentic.

"We want this to come across in the film. We want an honest and transparent enviroment around the club.

"The football business is not always so open but we wanted the fans to see who we are and how we want to run the club.

"It was an up and down season last season with some highs and lows.

"It started very hard but we ended with some success reaching Wembley.

"It proves if you are honest and hard-working as a group, and you have a plan, you can be successful.

"The film shows that some decisions we have taken over the last year or so haven't been easy, but they have always been done for the best of the club." 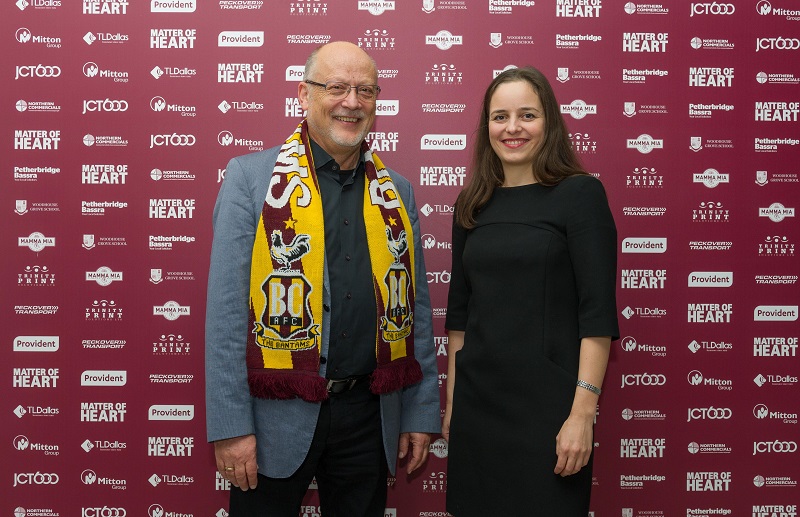 The documentary was put together by German production company, TVT Media, and directed by Franz Stephan.

Stephan, pictured left alongside colleague Christine Burgmeier, said: "Whenever we filmed at the stadium on a match-day, I would get goosebumps.

"Bradford is a special club with a unique and passionate set of supporters.

"It is called a 'Matter of Heart' because you can see in the documentary what the club means to the staff and the fans.

"This story is special not just for Bradford fans though.

"It is very rare for any football club to give this level of access, so I feel any football supporter can enjoy this.

"There are so many scenes that will be brand new to many supporters."

The documentary's next public showing will come at the Northern Commercials Stadium this Thursday (16 November 2017) evening at a special fans' Q&A session with Edin.

Supporters present at the screening will be able view all the most salient scenes from the absorbing film, as well as hearing an exclusive insight from the joint-chairman and those inside the club.

Fans can find out more information on the Matter of Heart production HERE.