The Bantams' interest in this season's FA Youth Cup ended at the first-round stage with a 3-0 home defeat to Blackpool.

Skipper Jacobson opened the scoring for the visitors just over ten minutes before the break, with Watkinson doubling Blackpool's advantage ahead of the half time break.

Visiting midfielder Sumner completed the scoring for the Lancashire side with a third late on.

Both sides started the tie at a ferocious pace, with City looking to get willing runner Casey Taglione into space behind the Blackpool defence whenever possible.

A forceful run from Taglione fifteen minutes in saw the attacker eventually brought down just outside the area after he'd beaten three Blackpool players.

Matthew Birchall took responsibility for the resulting free-kick but the young attacker's effort flew just wide of the post as he slipped over while striking the ball.

Five minutes later, Blackpool went close for the first time on the night when Watkinson headed over from close range following Rowan Roache's driven cross into the six yard box.

City threatened with a header of their own on the half hour mark following an inventive free-kick.

Birchall and Raeece Ellington seemed to both get in a tangle taking a wide free-kick delivery, before the former quickly whipped the ball into the box in an attempt to catch out the home defence.

A lurking Taglione pounced with the header deep inside the box but the effort deflected past the post for a home corner.

At the other end of the pitch, the pacey Finlay Sinclair-Smith saw an effort from just outside the area deflect over the bar for a corner of their own for the visitors.

From the resulting set-piece, Blackpool opened the scoring in through Jacobson.

City struggled to clear their lines as the corner delivery landed in the heart of their area and the Seasiders' skipper was on hand to rifle the loose ball into the far bottom corner.

Blackpool then doubled their lead just under five minutes from the break when Watkinson powered a header past the despairing dive of George Sykes-Kenworthy following Nathan Shaw's near post cross.

The Bantams had a great opportunity to get themselves back into the match less than a minute after the restart when Birchall capitialised on a loose touch from Blackpool defender William Avon around the edge of the box.

Birchall looked to lob the ball over the advancing Thordarson but the shot-stopper stood up tall to make the block.

Blackpool threatened themselves soon after via another defensive lapse though, with Sykes-Kenworthy's under-hit pass pounced on by Roache.

Roache's low centre picked out a lurking William Dunne in the middle but Sykes-Kenworthy redeemed himself with a brave block to repel the Blackpool striker's close range effort.

The danger wasn't quite over for City as the ball ran loose but Reece Staunton was on hand to deny Sinclair-Smith with a strong block.

Sumner then headed onto the roof of the net while in space from a Blackpool corner shortly afterwards.

The chances continued to come at the start of the second period, this time City going close following Josef Hefele's testing ball in behind.

With Taglione causing problems in the visiting defence as he stretched to reach Hefele's pass, Blackpool 'keeper Craig Thordarson failed to hold onto the ball and Reece Powell eventually fired wide from inside the box. 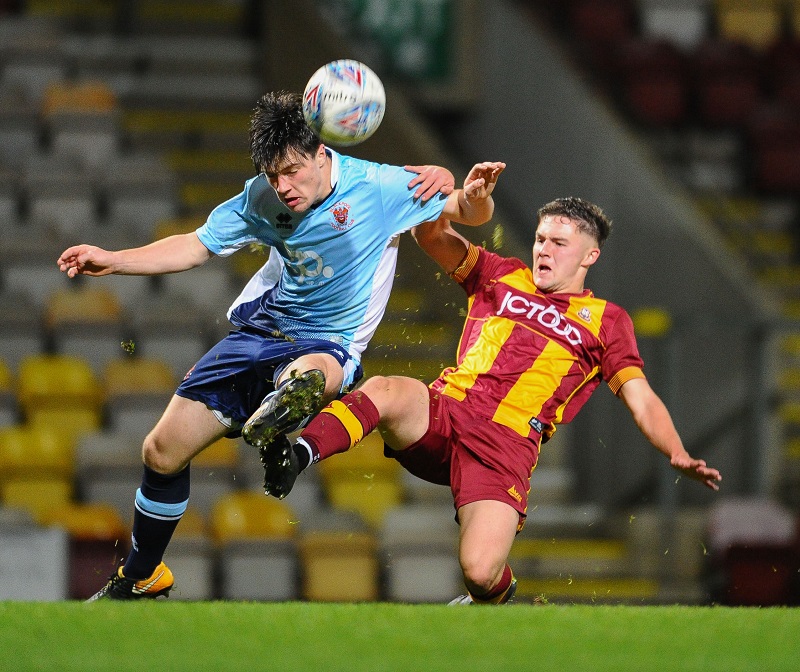 The breathless pace in the early stages after the interval also saw Shaw denied by Sykes-Kenworthy after a bright run in behind City's defence by the Blackpool winger.

City introduced attacker Kielen Adams off the bench just before the hour in an attempt to kick-start their efforts to stay in the competition.

The Bantams then brought on Oliver Kirkpatrick and Dylan Drovi later in the half to complete their allocation of substitutes for the tie.

Centre half Kirkpatrick's arrival into the action saw the Bantams move to a three at the back, with Sam Wright and Hefele joining the substitute in central defence.

As much as the Bantams tried to change the flow of the game, however, Blackpool still looked largely in control of proceedings as time ticked away.

The impressive Sinclair-Smith forced a low save from Sykes-Kenworthy eight minutes from the end following a drive forward from the winger.

Blackpool made sure of their progression into the second round three minutes from the end of normal time when Sumner pounced for the visitors' third of the night.

Roache's low ball into the box from a wide free-kick was prodded goal-wards by Seasiders substitute Ewan Bange.

Sykes-Kenworthy managed to block the effort on the line but Sumner was on hand to poke home the loose ball from close range.