Bantams boss Stuart McCall feels that City's dominant display over Bristol Rovers this Saturday was their most complete performance of the season so far.

McCall's men claimed an impressive 3-1 victory over Bristol Rovers in front of the Sky Sports cameras thanks to Charlie Wyke's third career hat-trick.

McCall's men started strongly against a side who had won their previous four league and cup games, and they never truly looked in danger once Wyke netted the second of his three goals just before the hour mark.

McCall said: "We did just enough to win our first two games, but today (Saturday) we had a number of good performances throughout the side.

"You need that if you are to consistently win games of football at this level.

"We are not getting carried away, but this was more of how we would like to play.

"Bristol Rovers are a dangerous side, but we started the game with a real tempo.

"The intensity in which we played at this afternoon was key.

"We asked the midfield two (Jake Reeves and Romain Vincelot) to win the battle in the middle, which they did.

"Gilly (Alex Gilliead) and Nicky (Law) did a great job pushing forward, and the front two (Charlie Wyke and Dominic Poleon) held the ball up well and brought others into play.

"The defence was strong as well - it was a complete team performance.

"We are naturally disappointed to concede a goal late on but we still managed to see the game out well.

"After the disappointment of last week (vs Walsall), we showed good determination to bounce back and see the job through.

"The response from the lads after the Walsall game was good in training throughout this week, and the performance was good today also.

"The standards have been set now. We are certainly feeling more positive than last weekend." 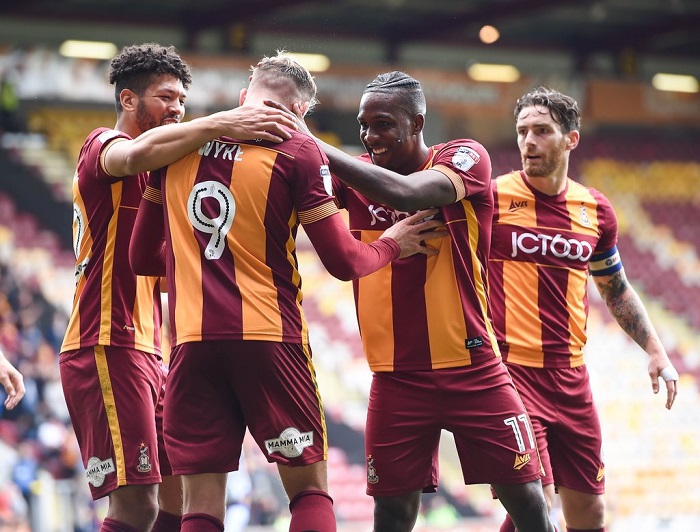 For Wyke, his match-winning treble got him off the mark for the season and also moved him joint top in the scoring charts alongside fellow forwards Dominic Poleon and Alex Jones.

While Saturday's game was Wyke's first home start of the season, the game also saw Romain Vincelot and Adam Chicksen - complete with protective mask - feature for the first time on home soil in the league since the opening day win over Blackpool.

McCall added: "His (Charlie Wyke's) goals were obviously key this afternoon but his general play was important as well.

"He holds the ball up and brings others into play. He makes us a bigger threat going forward.

"With Romain Vincelot back in the side as well, we now also look a bigger threat from set-pieces, especially with Tony McMahon's deliveries.

"Adam Chicksen coming back gives us some extra experience down the left as well.

"Chix has great fitness levels. To be out for four weeks and then play 90 minutes tells you that.

"Along with Charlie and Romain, it was another good comeback performance in front of the home fans for Adam."