The Bantams were denied a welcome victory over Bury this Saturday when the win was snatched from their grasp in the final seconds of injury time.

Despite going down to ten men with ten minutes to go after Matthew Kilgallon was dismissed for a second bookable offence, City - who were led by Greg Abbott and Kenny Black - thought they had claimed all three points when Shay McCartan fired home just before the end of normal time.

Cruelly, it wasn't to be for City, however, with George Miller swooping in the fifth and final minute of added on time to head home from close range past Colin Doyle to secure Bury a share of the spoils.

After a goalless first period, which saw Dominic Poleon denied via a one-on-one situation with Connor Ripley, City took the lead just before the hour mark when Timothee Dieng converted Alex Gilliead's driven cross-come-shot across goal.

Gilliead was on hand to block James Hanson's goal-bound header from a Harry Bunn corner but Nathan Cameron was still able to bundle the ball home on the rebound.

City's task was then made harder when Kilgallon, who had already received a yellow card earlier in the second period, was given his marching orders for clipping Miller as the striker burst through just outside the box.

Despite the odds being against them though, City increditably were still able to retake the lead with time running out.

After beating Greg Leigh to Nathaniel Knight-Percival's ball over the top, McCartan bundled his way past Shakers shot-stopper Connor Ripley before composing himself to slot home.

The goal understandably sparked joyous scenes in the home stands, but that ecstasy would unfortunately be replaced by agony when Miller netted in the final moments from the last attack of the game. 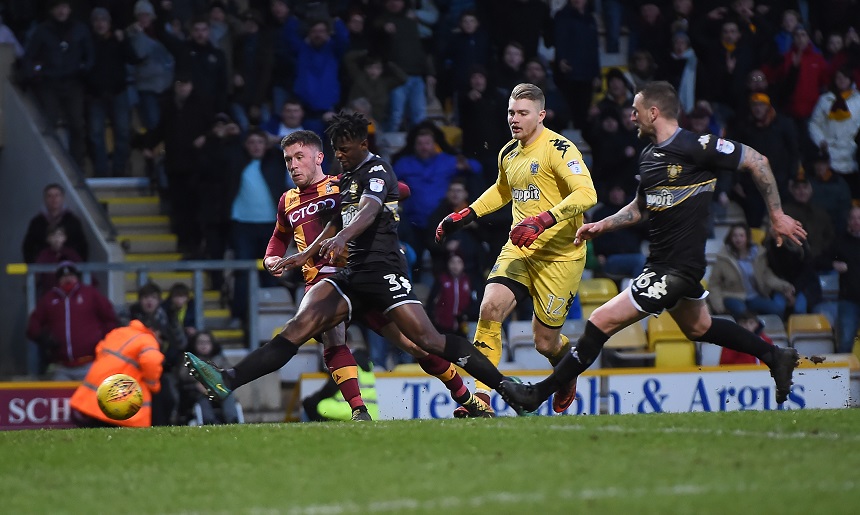 In-game updates from throughout the fixture can be seen via our Match Centre HERE.

Match highlights and post-match interviews to appear on iFollow HERE.