Bantams left back Adam Chicksen made a successful return from injury in City's Central League (reserve) victory over Doncaster Rovers this Tuesday.

Chicksen, who had previously been sidelined since the middle of October through injury, played the first period before being withdrawn, as planned, at the interval.

Recent loan signing Callum Guy was given seventy minutes in the second-string fixture.

After making his return from a long-term knee injury in City's reserve game last week, Reece Webb-Foster featured for the last half an hour as a second half substitute.

Despite persistent sleet showers at City's Apperley Bridge training ground, the two sides made light of the conditions to both contribute to an entertaining fixture.

The Bantams dominated the opening stages but found themselves a goal behind ten minutes in when Reece Fielding headed in from a Tyler Garratt corner.

Doncaster could have doubled their lead shortly afterwards when Craig Alcock played Issam Ben Khemis in with a sight of goal but George Sykes-Kenworthy blocked well.

City could have drawn themselves level on the half hour mark when a driving run from Gibson saw the attacker hit the post from a tight angle.

Grodowski tried to fire home the rebound from close range but his effort was cleared off the line.

The Bantams did find an equaliser six minutes before break, though, when Gibson and Grodowski combined to good effect.

Gibson's ball over the top played Grodowski into space behind Doncaster's defences and the German striker coolly lobbed the ball over Rovers 'keeper Marko Marosi and into the net off the underside of the bar.

As scheduled, Chicksen was substituted at the break and replaced by apprentice defender Oliver Kirkpatrick. 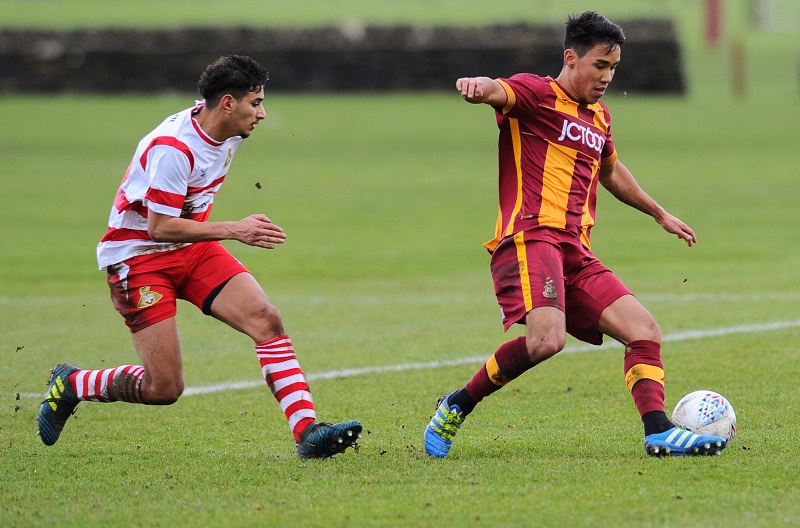 City took the lead of the match for the first time of the afternoon shortly after the restart following a mix-up between Marosi and his defence.

With Marosi out of his goal, Fielding was robbed of the ball by Grodowski and the striker teed up Gibson for a simple tap-in.

Two became three for City soon after, Hudson confidentially slotting past Marosi to double the advantage after the young winger was found in the box.

Doncaster got themselves back into the contest minutes later, however, when Morgan James finished neatly past Sykes-Kenworthy via a low cross from the right.

Buoyed by James' goal, Doncaster pushed to get themselves back on level terms but Liam Mandeville and Ben Khemis both had efforts repelled by Sykes-Kenworthy.

At the other end, Webb-Foster, who was introduced into the action for Grodowski on the hour, saw a shot blocked on the line by Alcock following good work from Gibson.

Webb-Foster could have added some gloss to the final scoreline when City were awarded a late penalty after the forward was pulled back in the box by Alcock.

Sadly for Webb-Foster, though, he saw his spot-kick repelled by Marosi, with the striker then hitting the rebound against the base of the far post.