City began their pre-season programme of fixtures ahead of the 2018/2019 campaign with an opening friendly of the summer at Guiseley this Tuesday.

First year professional Reece Powell fired the Bantams into the lead early after the break, but two goals afterwards from Guiseley earned the hosts a narrow 2-1 victory on the night.

Six of City's summer signings saw action at Nethemoor in the Bantams' encounter with their Vanarama National League North opponents.

As tends to be the case during the early stages of pre-season, City fielded two separate sides - one per half - in an attempt to give as many of the group as possible some game-time.

Richard O'Donnell, Joe Riley, Anthony O'Connor and Josh Wright all featured in the first period against the Lions, while Connor Wood and Thomas Isherwood played in the second half team.

One interesting footnote from the game was that the friendly was officiated by experienced Premier League referee Jon Moss.

Once the action got underway, it was City who made most of the early running.

Riley and Shay McCartan both fired narrowly over with efforts, while McCartan and strike-partner Charlie Wyke warmed the hands of Guiseley 'keeper Joe Green later in the half.

Guiseley's best openings in the first twenty of the encounter came via attacking duo Rowan Liburd and Curtis Morrison, both of whom saw low drives fired narrowly past the post.

Wright went the closest to breaking the deadlock for either side when he rattled the bar just past the half hour mark with a rising drive from roughly twenty-five yards out.

In response at the other end, one of Guiseley's three trialists on shown on the night curled a free-kick from just outside the box narrowly over minutes later.

City ended the half on top, with Jordan Gibson firing across goal with an angled drive that Green gathered up ahead of a lurking Wyke. 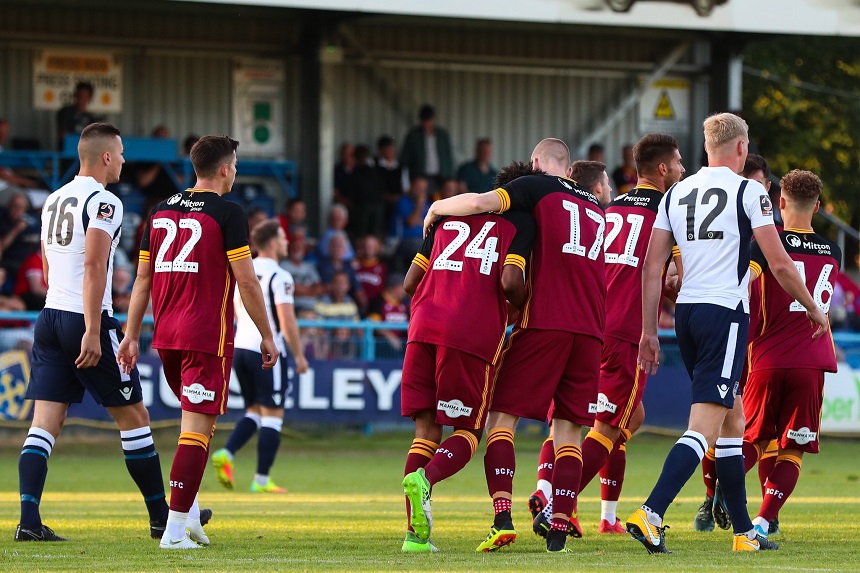 The Bantams' new-look side after the restart wasted no time in making an impression, Powell finding the corner with a thumping header from an Alex Jones cross in the very first minute of the second half.

Jones' involvement in the goal came in his first outing for the Bantams since November last season due to a troublesome ankle problem.

The striker was one of two members of Collins' squad making a welcome return from injury after the break at Nethermoor, Ryan McGowan also featuring after injuring his knee back in February.

City could have doubled their lead soon after Powell's opener, but Kai Bruenker was denied by a smart save from former City shot-stopper Jon Worsnop.

Guiseley, like the Bantams, made a number of changes at the half time interval, and one of those introductions, Will Hatfield, was on hand to level for the hosts roughly twenty minutes from the end.

Following a blocked shot deep inside City's penalty area, Hatfield was in the right place to poke home from close range past the Bantams' trialist 'keeper.

Hatfield had his sights on a second goal when the ball fell his way just outside the box ten minutes later, but his firm drive was held by City's on-trial goalkeeper.

Shortly after Bruenker had headed over from a City corner, Guiseley came up with the winner two minutes from the end of normal time.

Scott Smith finished neatly into the far bottom corner with a low drive from an angle inside the box.