A youthful Bantams side unfortunately suffered a heavy defeat at the hands of Harrogate Town in a high-scoring pre-season friendly fixture this Saturday.

City's starting XI was made up mainly from the younger members of Head Coach Michael Collins' squad.

Harrogate, who will feature in the Vanarama Conference for the first time during the forthcoming 2018/2019 campaign, named a near full-strength side for the encounter at their CNG Stadium.

Following a fast start from Harrogate on their artificial 3g playing surface, Knowles fired the hosts in front five minutes in.

Harrogate's top scorer from last season converted from close range after Liam Kitching had sent a booming header for goal from a free-kick into the box from deep.

Harrogate doubled their lead for the afternoon in the seventeenth minute when Emmett beat George Sykes-Kenworthy to a long ball over the top before lobbing it over the on-rushing 'keeper and into the net with a bouncing effort from just outside the box.

Emmett then grabbed his second and Harrogate's third of the afternoon with just over twenty minutes played.

Knowles laid the ball back to the midfielder inside the box and he fired in a rasping drive past Sykes-Kenworthy via the inside of the near post.

As City looked to respond, Clare headed narrowly wide with a header following Connor Wood's inviting ball into the box from a wide free-kick from the left.

Harrogate registered a fourth goal for the afternoon when Muldoon converted from a few yards out following a low cross from the right into the six yard box.

A fifth goal followed for Harrogate minutes later in similar fashion, this time Knowles was on hand to tap in from close range after another low centre across goal.

Devine, who had earlier received treatment for an injury, was replaced around ten minutes before the break by Callum Gunner.

Harrogate netted a sixth goal from their next meaningful attack following Devine's departure. Williams got himself on the score-sheet when he fired home from deep inside the box via a cross from the right.

City made a second substitution five minutes ahead of the interval when Patrick was taken off for Reece Powell.

Powell was quickly into the action, crossing low from the left for Ellis Hudson, who fired at Harrogate 'keeper James Belshaw with a low strike from just inside the box. 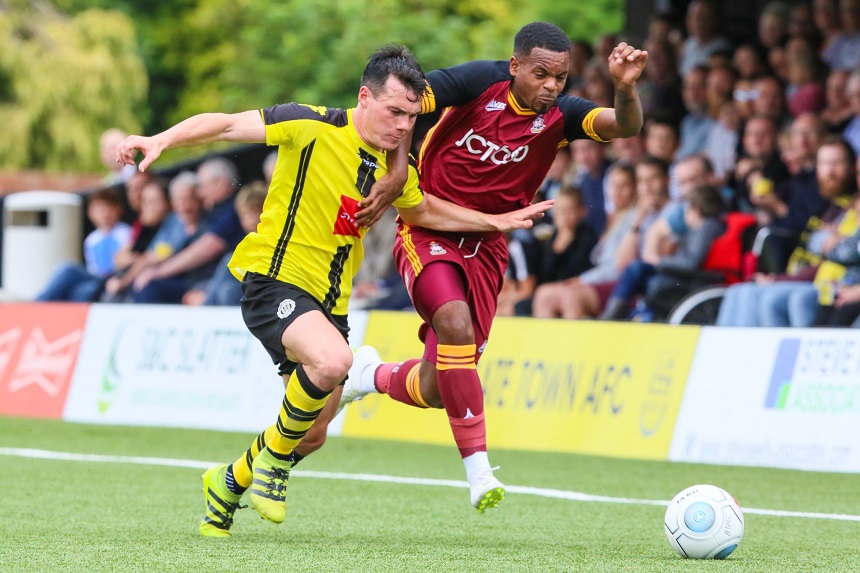 City began the second period with strikes from outside the box by their trialist midfielder and Powell, both of which were held by Belshaw.

The Bantams pulled a goal back just before the hour mark when Clare fired home following Robinson's low centre into the six yard box from the left.

Clare netted again roughly eight minutes later when he charged down an attempted clearance from Belshaw before firing into an unguarded goal from close range.

In this game of numerous goals, there was still time for another when Harrogate claimed a seventh for the afternoon.

From a free-kick into the box from the right, Harrogate defender Howe headed on and Williams found the bottom corner with a neat half-volley on the turn.

The Bantams made their third change of the match soon after, Kai Bruenker coming on for Clare.

City had one final chance to trouble the scorers again five minutes from the end but their trialist midfielder on show in the match saw a shot from the edge of the box pushed away.