The Bantams were able to take plenty of positives from their friendly encounter with Sheffield United at the Northern Commercials Stadium this Tuesday evening, eventually going down 3-2 to their Yorkshire neighbours.

A strong first half showing from United saw the visitors move into a two-goal lead at the break thanks to efforts from John Fleck and Leon Clarke.

To their credit though, City responded commendably after the break and fought back into the pre-season contest.

Fresh from joining the club the day before, Jack Payne pulled a goal back for the Bantams with a fine strike from outside the box.

Substitute Jordan Gibson then equalised for City with ten minutes left via a smart finish from inside the box.

Sadly, there was time enough left for Blades’ star striker Billy Sharp to net and secure victory for Sheff Utd, but City will still been able to take a lot of encouragement from their showing against their higher league opponents.

After choosing not to risk a large number of his senior players for the weekend friendly at York City due to minor knocks, Head Coach Michael Collins was able to name a relatively strong starting XI for the visit of the Blades.

Eight of the Bantams’ summer signings – including recent recruit Payne – were named in Collins’ side to give them their first taste of the Northern Commercials Stadium as City players.

As they did at York's Bootham Crescent, however, Romain Vincelot, Jake Reeves, Ryan McGowan, Shay McCartan and Alex Jones all missed out again.

United – managed by former Bantams player Chris Wilder – showed their intentions for the game by naming a strong side themselves; a team that featured several first team regulars from last season, such as one-time Bantams loanee Lee Evans.

City’s Championship visitors took the lead in the sixth minute when a flowing move from United ended with Fleck beating Richard O’Donnell with a fine first-time finish from around the edge of the box.

Sadly for the Bantams, Charlie Wyke was forced off with an injury before the restart of the game; the striker replaced with another of City’s new attacking purchases from the start of the week, George Miller.

United, who were showing a lot of the skill and class that served them so well in the Championship last season, threatened again twenty minutes in.

A well-worked free-kick from the Blades saw Fleck fire in a drive from distance but the effort was held first time by an alert O’Donnell.

Despite the calibre of their opponents, City were trying to show glimpses of their best going forward, with United defender Jack O’Connell required to make a fine last-ditch challenge to prevent Payne from playing Miller through on goal.

The Blades doubled their lead just over ten minutes before the break when Daniel Lafferty burst clear into the box and squared for Clarke, who fired into the net from close range despite the best efforts of Joe Riley.

Wilder’s side were continuing to look a potent force as the first half came to a close. Clarke fired into the side-netting on the half-volley from a tight angle from inside the box with one chance in particular.

Sherwin Seedorf showed great vision on the stroke of half time to feed Connor Wood on the left channel of the penalty area with a well-timed pass, but George Baldock got back into position to clear the danger.

For the third friendly in succession, City replaced O’Donnell at the interval with a trialist shot-stopper.

Gibson was also introduced ahead of the start of the second period; the young attacker replacing Wood.

The Bantams showed good early intent after the break, with Seedorf seeing a shot from inside the box blocked away by Richard Stearman.

City were rewarded for their bright start to the second half when Payne fired into the bottom corner with a great low drive from around twenty yards out to halve the deficit. 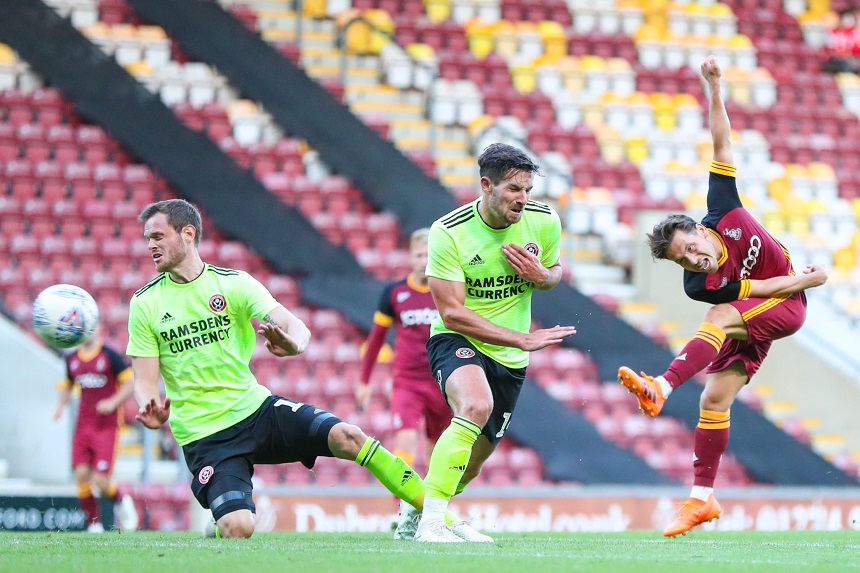 United came close to restoring their two-goal advantage minutes later, but David McGoldrick struck the base of the far post with a strike from just inside the box after being played into space by Baldock.

Making his first appearance of pre-season, Tyrell Robinson was brought on just after the hour mark for Seedorf.

Robinson wasted no time in getting involved in the action following his introduction; the substitute winger firing at United 'keeper Dean Henderson with a powerful angled drive from inside the box.

United made six changes themselves soon after, with the likes of Ricky Holmes and the experienced Sharp entering the play.

Like Robinson, Sharp himself got into the action quick enough, but his header from a United corner looped over.

McGoldrick then curled wide of the far post with a shot from outside the box from the Blades’ next meaningful attack.

The flow of substitutions continued at pace for the Bantams shortly afterwards.

Nathaniel Knight-Percival had already replaced Matthew Kilgallon minutes before; Omari Patrick, Daniel Devine and Kai Bruenker were then called upon themselves minutes later for Payne, Hope Akpan and Miller respectively.

Payne was one of a number of City players to receive a warm reception as they left the field on a night when more than one member of Collins' squad impressed the home faithful.

By the time Thomas Isherwood, Ellis Hudson and Curtis Peters were introduced from the bench in the final stages of the game, City were up to twelve substitutions in total for the night.

The Bantams levelled things up with ten minutes of the game remaining when Bruenker knocked a cross from the left into the path of Gibson and the attacker squeezed the ball past United sub shot-stopper Luke Steele from close range.

United were back in front with time running out, however. Sharp firing low into the corner past City’s trialist ‘keeper with a drive that seemed to take a slight deflection on its way through.

The goal would prove to be the match-winner, but City – buoyed by their second half showing in particular – will have been able to take plenty from the encounter as preparations for the new season begin to step up.