The Bantams were defeated 1-0 by York City in their second pre-season friendly fixture of the summer this Saturday.

Hamza Bencherif popped up with the winner for York in the second period, the defender smashing in from close range after a corner delivery had dropped kindly into his path.

After sitting out Tuesday's opening friendly at Guiseley, Hope Akpan and Sherwin Seedorf were both involved for City at York for the first time in pre-season.

Nathaniel Knight-Percival, another player not to see action at Guiseley in midweek, featured from the bench after the interval.

Tyrell Robinson and Jake Reeves also sat out once again with minor injuries.

Despite not being involved though, those sidelined were in the stands at Bootham Crescent to watch the game.

Unlike the Guiseley friendly - where one separate side per half was used - Head Coach Michael Collins gave the vast majority of his starting XI around an hour or so in the York match.

City did end up making all eleven substitutions in the end though, with nineteen squad members and three trialists in total getting some game-time.

In this summer of seemingly continuious marvellous weather, it was another bright and sunny afternoon that greeted Collins' squad at Bootham Crescent.

Following its official launch less than 24 hours earlier, City's new blue and white away strip was worn by the players for the first time against the Minstermen.

An early chance apiece fell to both sides in the July sunshine once the game got underway.

After a purposeful run into the box from the right, City's trialist midfielder forced a smart reaction save out of York 'keeper Adam Bartlett by his near post.

At the other end, Simon Heslop looped a shot from outside the box narrowly over the bar after Richard O'Donnell had punched away a free-kick delivery from David Ferguson.

Seedorf, who looked lively with his pace and trickery in the first period, saw a fierce shot from inside the box tipped over the bar by Bartlett later in the half. 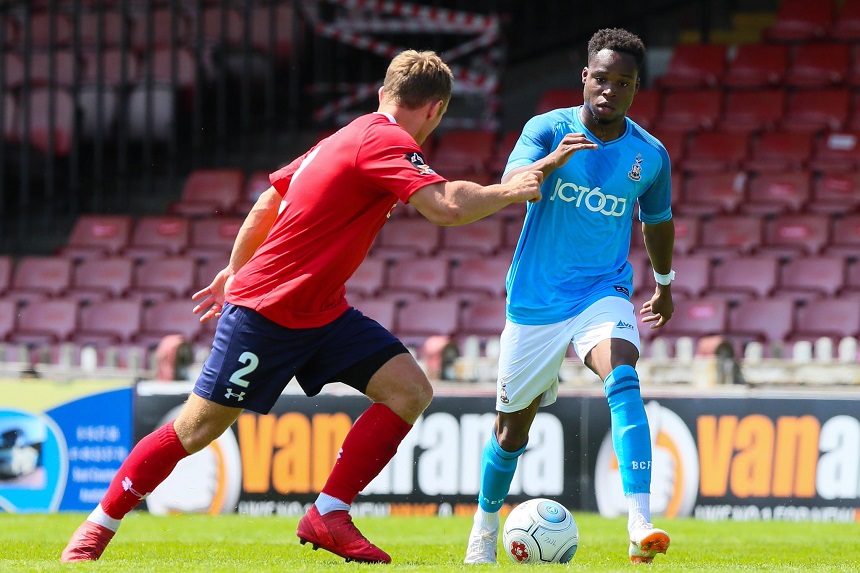 Towards the end of the opening half, Jordan Burrow powered in a header from a York corner which O'Donnell managed to tip over via a good reflex stop.

While City made just the one change at the break - O'Donnell being replaced by a trialist goalkeeper - Collins did then introduce Omari Patrick and Nathaniel Knight-Percival into the action from the bench with just under ten minutes of the second half played.

Hosts York made three changes of their own at the break, with sub Alex Kempster involved in two early chances for the Minstermen following the restart.

Fellow sub Josh Law - the brother of former Bantam Nicky Law - also went close after firing over with a free-kick from outside the box.

In between those two chances for York, Seedorf dragged a low shot wide of the near post following a driving run from deep towards the edge of the box.

York took the lead just past the hour mark when City failed to clear a Law corner; Bencherif pouncing to smash home to loose ball into the roof of the net.

Ahead of the restart following Bencherif's opener, City brought on Kai Bruenker and Callum Gunner for Akpan and Seedorf.

York looked for a second goal in the game soon after breaking the deadlock, but Anthony O'Connor produced a brilliant clearance on the stretch to prevent veteran striker Jon Parkin - another York sub - from latching onto a testing cross into the box from Kempster.

The Bantams made four further alterations with just over twenty minutes of the match to go, with the likes of Josh Wright, Adam Chicksen and O'Connor all being replaced.

City's final change of the afternoon came ten minutes from the end when apprentice defender Reece Staunton replaced Daniel Devine, leaving the Bantams with a very youthful XI to see out the remainder of the match.

Two York players at the other end of the scale in terms of experience - Russell Penn and Bencherif - nearly combined with five minutes to go but the latter headed over from Penn's cross into the box.

The Bantams had a chance to find an equaliser with final action of the game but Patrick's free-kick from just outside the box was blocked by the York wall.