The Bantams have snapped up promising striker Tom Clare on a permanent deal from Yorkshire neighbours Barnsley.

Clare has penned a one-year contract at the Northern Commercials Stadium - his first deal at professional level.

His contract with the Bantams, which is subject to the usual EFL and FA clearances, will come into effect from 1 July.

The powerful 6' 5'' forward joins City after coming through the youth ranks at Oakwell.

The imposing attacker spent eleven years in total with the Tykes and featured for both Barnsley's Under 18 and Under 23 sides last season.

The 18 year-old impressed while on trial with the Bantams towards the end of last season, scoring in City's Central League (reserve) fixture at Morecambe.

Speaking about Clare's arrival, Head of Recruitment Greg Abbott said: "Tom has really got a lot going for him, he’s an 18 year-old lad but is 6”5 and plays like a traditional big number nine.

"He certainly brings something different to the group.

"This club have always had big centre forwards who have that ability to get themselves on the end of crosses.

"From Bobby Campbell to Ron Futcher to Charlie Wyke, Tom is one of that dying breed of tall, physical goalscorers.

"He’s still got an awful lot to learn, but we’ve already seen what can happen when young players get their chance in the first-team here.

"Ultimately, this is a signing which fits with our strategy.

"It’s just as important that we get recruitment at this end of the scale right as when we sign players who are going straight into the first-team." 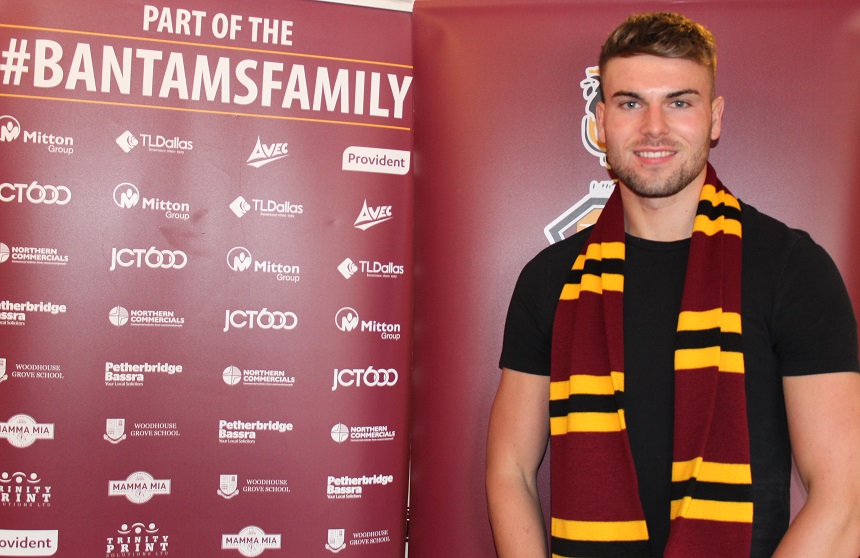 Clare himself added: “Bradford is massive club with a huge following.

"I have heard a lot of good things about the club and I can’t wait to get started.

“Hopefully I can show the fans what I can do and look to progress towards the first team at some point next season.

“I was with Omari (Patrick) when he used to be at Barnsley. I spoke to him about this move before joining and he just said what a good opportunity this would be for me.

“As you could see with Omari last season, there is that chance at Bradford to progress from the development team into the first team squad.

“I will get the chance to train with the first team next season and hopefully learn a lot from them.

“I like to use my height to compete for aerial balls but I can run in behind as well, I’m not just a hold-up player.

“This is a new club and a new challenge for me, and I am really excited to get going.”