Three goals in ten first half minutes ultimately did the damage for Luton Town, as David Hopkin's Bantams fell to a 4-0 defeat at the hands of the high-flying Hatters at Kenilworth Road this Tuesday evening.

A makeshift back three from the Bantams - which featured Adam Chicksen and the recalled Kelvin Mellor and Ryan McGowan at centre half- seemed comfortable holding promotion-chasing Luton at bay, until James Justin broke the deadlock in the twenty-eighth minute.

Luton attacker Elliot Lee added to Justin's opener with two strikes of his own within five minutes of each other to put the hosts firmly in control at the break.

Facing the prospect of a difficult second period, City, to their credit, showed commendable spirit to keep going for goals against a side boasting the best home record in the division so far.

The Bantams' determined effort after the break arguably merited a goal, but it was Luton who - perhaps harshly on City - netted a fourth just before the end when Harry Cornick broke free and scored at the second attempt.

Luca Colville was fit enough for a place on the bench after previously being sidelined since early September with a knee injury.

Hope Akpan was sadly still sidelined, however, with a hip injury.

With Luton flying high at the top end of the division, currently holding a long unbeaten run and the best home record in League One, CIty were always going to be in for a challenging evening, especially considering their unavailable players.

Although Luton enjoyed plenty of possession, though, City's patched up defence - apart from a twelfth-minute effort on goal by Lee - were restricting Luton to precious little in the way of actual strikes on O'Donnell's goal.

At the other end of the pitch, Luton defender Sonny Bradley was perhaps lucky to not to see red after accidentially catching Kai Bruenker in the face with a stray elbow as the pair chased down a ball in the hosts' half.

With just over twenty minutes gone, Andrew Shinnie looked to play James Collins into space in the box, but Chicksen was on hand to make a vital clearance.

Luton skipper Glen Rea tried his luck from outside the box soon after but the strike was comfortably held by O'Donnell.

With CIty looking to edge their way to the interval unscathed, though, Luton were able to find a breakthrough just before the half hour mark.

Cornick's curling effort from just inside the box was pushed out by O'Donnell, but Justin was first onto the loose ball and he fired high into the net with close range effort from a tight angle.

Lee fired at O'Donnell after being teed up by Pelly Ruddock-Mpanzu soon after, but the Bantams actually nearly went close to levelling up on more than one occasion a few minutes later.

Bruenker looked to play Doyle into shooting space inside the area, but Matty Pearson was on hand to make a vital tackle to put the ball behind.

From the resulting Ball corner, Mellor headed for goal but his effort was hooked away from just in front of the goal-line by Collins.

There was then a fairly major moment of controversy that seemingly went against City.

Luton 'keeper James Shea fumbled possession out of his hands before quickly gathering up the ball again - something that is against the rules - to deny a lurking Doyle a close range tap-in.

City were fuming with Mr Coggins' decision not to award them a free-kick in the box - claiming an illegal second touch by the home shot-stopper - and sadly worse was to come as play continued and Luton doubled their lead from their resulting attack forward.

As Luton sprung forward, Lee was eventually found in the City box and the attacker, who is the son of former Newcastle midfielder Rob Lee, picked out the far bottom corner with a firm strike.

With City incensed by the lack of a free-kick given in their favour in the Luton box following Shea's incident, Bantams shot-stopper O'Donnell was booked for racing from his goal to complaint to referee Mr Coggins.

It seemed the Bantams hadn't quite cleared their heads when Luton went three goals up five minutes later.

A ball forward from Pearson was flicked into the path of Lee by Cornick and he fired low past O'Donnell.

City did see Bruenker head narrowly over from Lewis O'Brien's cross before the half was out, but there was no denying Hopkin's men were firmly up against up at the interval.

Bruenker was replaced by Jim O'Brien at the break as City, who started with a 3-5-2 formation, switched their system slightly.

O'Brien himself and Doyle, who captained the side in O'Connor's absence, both tried their luck with wayward efforts from outside the box early into the half.

Payne was then introduced into the action for Wood just under ten minutes after the restart.

The Huddersfield loanee immediately went to take a corner following his introduction, and his delivery nearly led to City pulling a goal back.

From Payne's ball into the box, Doyle flicked on for Ball to head home into the net from close range.

Any away celebrations were cut short by the linesman's flag though.

Following recent ruled out efforts against Aldershot and Oxford, Ball's 'goal' was the fifth to be disallowed for City in just eight days.

City kept pushing forward when they could in an attempt to get a goal that could possibly find them a way back into the match.

Lewis O'Brien looked to play Doyle into shooting space in the box just before the hour point, but last-man Bradley did just enough to block the ball behind for a corner.

Soon after, a City counter-attack saw Payne pick out Ball inside the box and the City number 40 curled a deflected effort past Shea's far post.

Just minutes later, Mellor took aim from outside the box and let rip with a thunderous drive that looked destined for the top corner until Shea tipped over.

With City looking the more likely scorers at this stage, Payne and Doyle then tried to work a way into Luton's box for a shot, with the ball eventually being bundled behind for another City corner.

Luton tried to threaten themselves with a couple of corners of their own from Justin - but one drive from Lee was blocked by Jim O'Brien and the other set-piece saw Pearson, who had earlier had a looping header held by O'Donnell from another corner, head over the bar.

Following City's disallowed offside goal earlier in the second half, the trio of Payne, Doyle and Ball nearly combined again in similar fashion twenty minutes from the end. 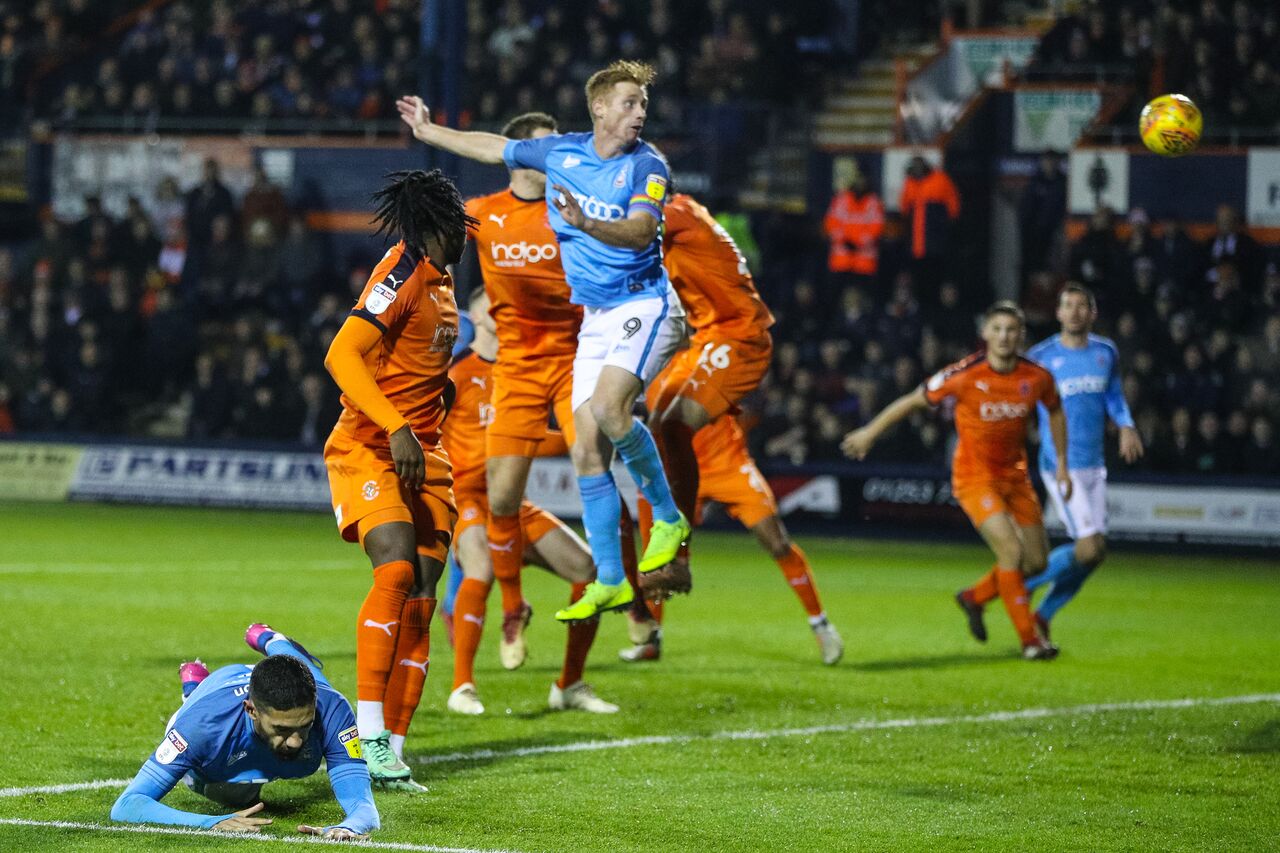 This time, however, the Rotherham loan attacker wasn't quite able to scramble home from close range after Doyle had headed on a Payne near post corner.

Payne himself then fired at Shea with a low drive from outside the box three minutes later.

In response, McGowan was needed to clear a threatening cross into the six yard box by full back Jack Stacey shortly afterwards.

Cornick then fired narrowly over O'Donnell's crossbar with a fizzing cross-come-shot from the right.

With the wind perhaps out of City's sails at this stage following their inability to turn second half chances into a potential lifeline goal, Luton looked more comfortable in the closing stages.

A Cornick far post cross had to be put behind by McGowan after Collins had headed the ball back across goal.

From the resulting Justin corner delivery, Lee scuffed a looping effort towards goal that had to be kicked clear from just in front of City's goal-line.

Payne did have one final serious attempt for City when he cut in-field and fired low at Shea from the edge of the box, but it was Luton who would end up troubling the scorers for one last time on the night.

An unfortunate slip by McGowan presented Cornick with a clear run at goal.

Cornick's first effort was repelled by O'Donnell but the Luton attacker was able to fire home at the second attempt on the rebound.

Luton could have netted again in the final minute of normal time but unmarked sub Aaron Jarvis fired at O'Donnell with an angled drive inside the box.

Match stats, line ups and action from the Luton fixture can be found via our Match Centre - HERE.