City's Sky Bet League One season continues this afternoon, as the Bantams welcome Portsmouth to the Northern Commercials Stadium (3.00pm).

As well as Portsmouth, we are delighted to welcome today's Big Match Sponsor, MetalTech. Thank you for your continued support!

As always we ask supporters to get to the stadium as early as possible for the game. Turnstiles will be open in all sections from 1.30pm.

The 2018/19 season continues with the introduction of coloured season tickets and this is as follows:

As we get ready support the Bantams on home soil, the club would inform you on what will be happening today.

Prior to kick-off, the Northern Commercials Stadium will pause for a minute’s silence to honour those who paid the price for our freedom and to remember those who lost their lives in the tragic helicopter crash at Leicester’s King Power Stadium last Saturday.

The City and Portsmouth captains will lay wreaths in the centre circle as the club honours the fallen servicemen and women to mark the centenary of the end of World War I.

Representatives of the Royal British Legion will be selling poppies around the Northern Commercials Stadium.

The players will be donning black armbands to pay tribute to those who lost their lives at the King Power Stadium.

Our popular matchday competition continues and one lucky supporter could walk away with the man of the match's worn shirt!

Some supporters have still not collected their season tickets for the 2018/19 season. If you are wanting to attend the game and still have to collect your ticket, please get down to the stadium first thing in the morning. Due to the potential for congestion in the North West Corner after the match with people leaving the stadium for the same safety reasons, the ticket office will not open at all after the final whistle.

The opening hours are:

During the summer, we announced a new and exciting opportunity for all local charities that would give them the chance to work alongside the Bantams and host a bucket collection at one of the five selected fixtures throughout the course of the season!

Every penny raised at the bucket collection will go to the charity, to help them fund the amazing work they do.

Primetime Bradford received the most votes from City supporters and will be hosting a bucket collection at today's game.

As promised, we have reduced the price of our draught beer and you can grab yourself a pint for just £4!

Available in every concourse. 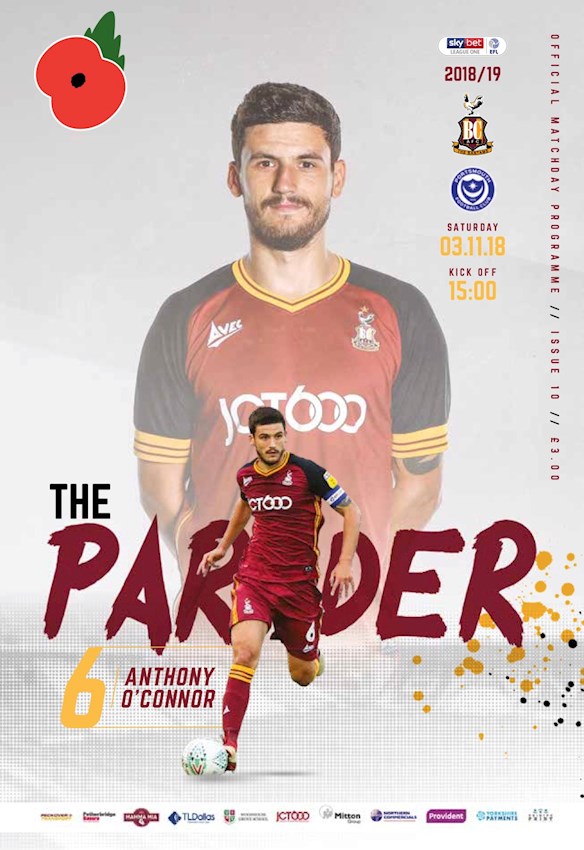 The Parader continues with Anthony O'Connor featuring on the front cover. Inside you will hear from O'Connor himself, David Hopkin and see who is the biggest joker as Adam Chicksen reveals all about his team mates.

Programmes will be available to purchase in the Bantams Bar, McCall and Hendrie Suite for a limited time prior to kick off.

Feeling the cold? Make sure you're wrapped up warm before kick off and purchase official merchandise from our members of staff!

Inside the JCT600 (West) stand, there will be hats, scarves, training wear and sweets on sale.

Make sure you have all of your claret & amber before kick off and visit The City Shop!

Bantams Bar - located in The Kop - will remain open for all City supporters after the full time whistle!