City are set to return to Sky Bet League Two action, this afternoon, hosting Salford City in our final game before Christmas (3.00pm).

Supporters are today encouraged to light torches when the players enter the field - helping the Utilita Energy Stadium 'Sparkle for Axl'.

Lucas Walker - whose brother Axl died from a rare blood disorder last year - will be a mascot for the game and will hopefully walk out to see the ground lit up.

Today’s match will be held in aid of the Bradford Teaching Hospitals NHS Foundation Trust.

The trust runs both the Bradford Royal Infirmary and St. Luke's Hospital and will be helping the Utilita Energy Stadium 'Sparkle for Axl', this afternoon.

Bucket collectors on behalf of the charity can be found in around the Utilita Energy Stadium, today, and supporters are asked to help out, in whichever way possible.

Salford City currently sit 14th in Sky Bet League One, during what is their first season in the EFL.

Be sure to grab a copy of Issue 13 of The Parader this afternoon, on sale for just £3 around the Utilita Energy Stadium.

Fit-again Jake Reeves - who also features in 'The Big Interview' - is this week's cover star, which is also carries a festive theme. 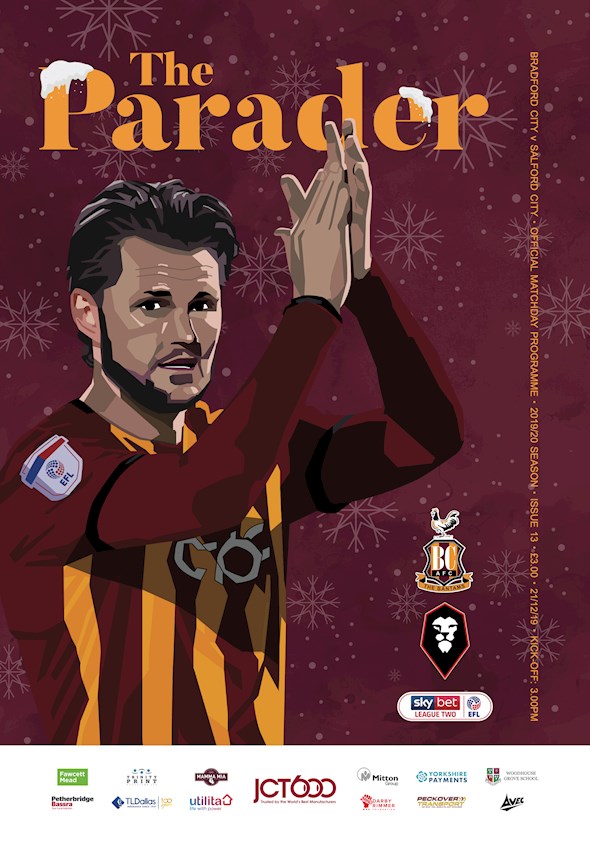 Other features include 'From The Top' with interim chief executive Stefan Rupp, 'From The Dugout' with manager Gary Bowyer and the popular 'Bantams Board'.

A dull but dry day is in store for supporters, with cloudy conditions and temperatures of around 7°C expected.