David Hopkin's Bantams showed all of the required battling qualities they will need in the second half of the season as they fought to a goalless draw at in-form Wycombe Wanderers.

Wycombe went into the contest having won eight of their last ten home matches, but Hopkin's men were good value for the share of the spoils they earned against their industrious hosts.

After a busy start by the Chairboys, City settled into the contest and they were denied the chance to take the lead in a controversial moment midway through the first period.

Following a cross into the box from the left by Connor Wood, Eoin Doyle fired for goal from close range and his effort seemed to be blocked on the line by the arm of Curtis Thompson.

No penalty was awarded, however, with the Bantams going on to finish the half strongly.

The second period was a fairly even encounter and both sides had their openings.

The closest Wycombe came to opening the deadlock was eighteen minutes from the end when sub Paris Cowan-Hall fired across goal.

The strike seemed to beat the dive of Richard O'Donnell but the impressive Anthony O'Connor got back to make a vital clearance.

Coming into the game on the back of Tuesday's dramatic 4-3 victory over Shrewsbury Town, Hopkin made one enforced change to his starting XI.

Calum Woods picked up an injury during the Shrewsbury win, meaning Adam Chicksen was recalled into the side.

Transfer deadline day signings Jacob Butterfield and Billy Clarke both came off the bench to make their debuts late on in the second half.

In the build-up to this Saturday's match, there was some small risk of the game not actually going ahead following heavy snow in the Wycombe area on Thursday.

Hard-work from staff and volunteers at Adams Park, however, proved enough to clear snow from the stands, car parks and surrounding roads at the ground to ensure the game could go ahead.

The game for Tuesday's match-winner, David Ball, looked to be over in just the seventh minute unfortunately when the attacker went down in pain following a tangle with Nathan Tyson.

Initially, it looked like it could be a serious one for Ball as he laid on the floor in agony but, thankfully, City's number 40 was eventually able to carry on.

After half chances at both ends, the first true effort towards goal came at City's end from a deep free-kick into their box nineteen minutes in.

Tyson connected with the delivery, but Richard O'Donnell was able to watch the downward header bounce past his far post.

The opening for Wycombe came during a high octane start by the Chairboys. Buoyed by their recent home success, Wycombe certainly made the faster opening to the fixture.

As the first half progressed, though, Hopkin's side started to look a greater threat in attacking situations. 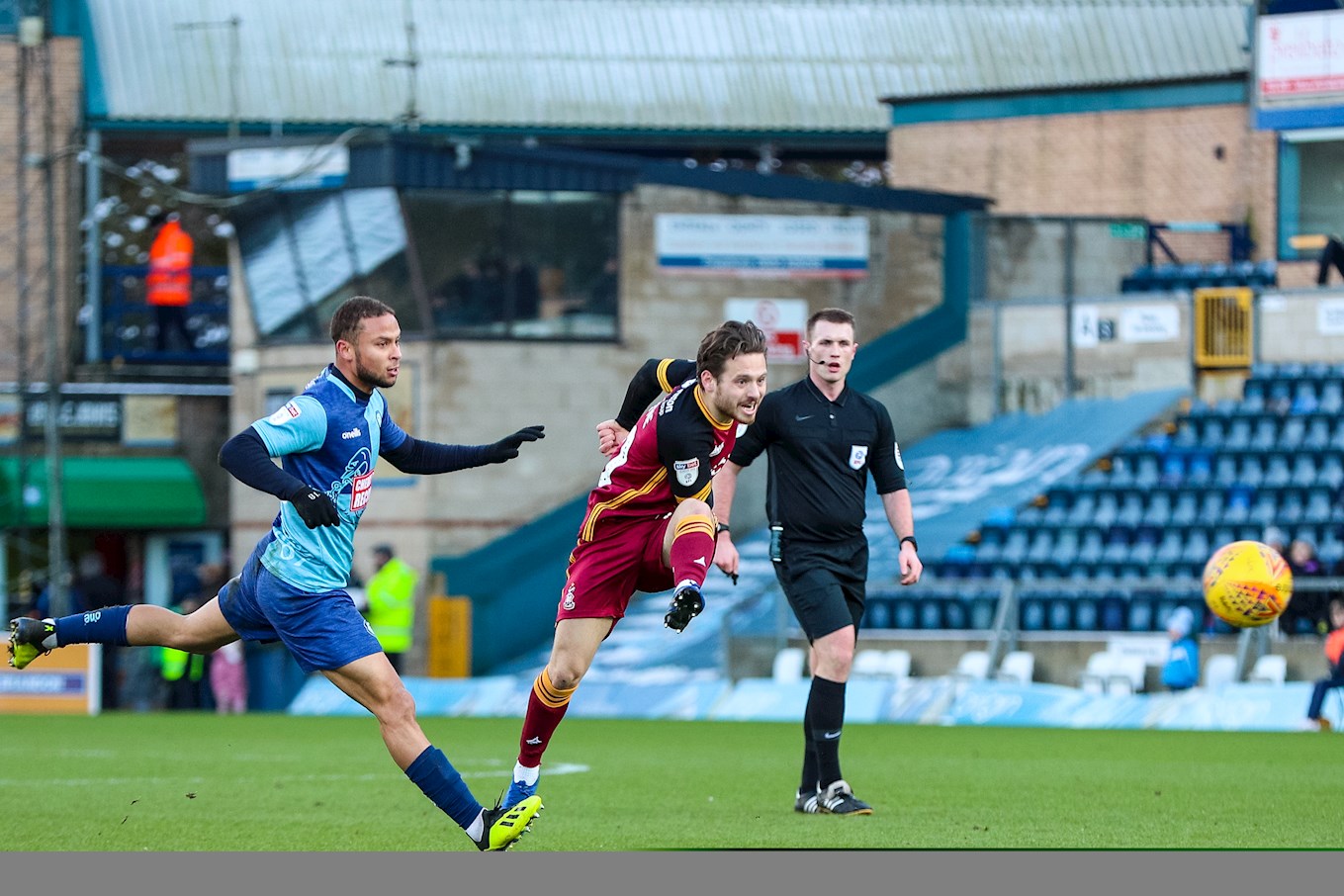 Midway through in the opening half, City nearly took the lead via a venture forward from the left.

Wood's delivery into the box caused some concern in the home defence and the ball dropped into the path of Doyle.

The Irishman fired for goal from close range but the effort was hooked away on the line by Thompson, seemingly via his out-stretched arm.

The City players nearby appealed for handball against the Wycombe midfielder - something that surely would have resulted in a red card and a penalty - but referee Mr Thomas Bramall was unmoved.

City's sense of injustice was only increased as it appeared Thompson had also actually pulled Payne back just seconds earlier as the attacker went to connect with the cross before Doyle did.

As City remained on top, Ball forced a save out of Wycombe goalkeeper Ryan Allsop via an angled drive inside the box.

Going into this encounter, Wycome were without their powerful and influential target-man Adebayo Akinfenwa.

The giant forward has certainly been a key part of Wycombe's push towards play-off contention, and the striker's absence did seem to affect the Chairboys' threat going forward.

Wycombe's efforts in attack were hindered further when Akinfenwa's replacement, Alex Samuel, was taken off with an injury ten minutes before the break.

With the Chairboys perhaps hindered slightly in attack then, the Bantams looked to take full advantage as they finished on the half on top.

Jack Payne and Hope Akpan both had shots blocked from inside the box following separate City attacks.

The Bantams also engineered the final chance of the half just ahead of the break when Payne crossed into the box from the right.

The centre was headed on by Doyle, but Nathaniel Knight-Percival behind him was inches away from converting as the ball bounced past the post.

Given their commendable ending to the opening half, City will have been confident of kicking on going into the second period.

In fairness to Wycombe, though, they seemed to respond to a regroup by their boss Gareth Ainsworth at the break and came back at City.

Samuel's first half replacement, Scott Kashket, warmed the hands of O'Donnell with a drive from just outside the box early after the restart.

As they did in the first period, however, City got going after a fast start from the hosts and the game looked up for grabs for both sides as the half moved on.

Joe Jacobson's attempted clearance was actually sliced across his own goal and the ball bounced narrowly past Wycombe's far post.

At the other end, just a minute or so after coming on from off the bench, Cowan-Hall went close for the hosts.

The winger got free down the right-hand channel of City's penalty area after good play between himself and Jason McCarthy.

Cowan-Hall drove a low strike across the box but O'Connor, who didn't put a foot wrong all afternoon, was on hand to vitally kick away by the line.

The momentum of the game continued to swing one way and then the other just minutes later. 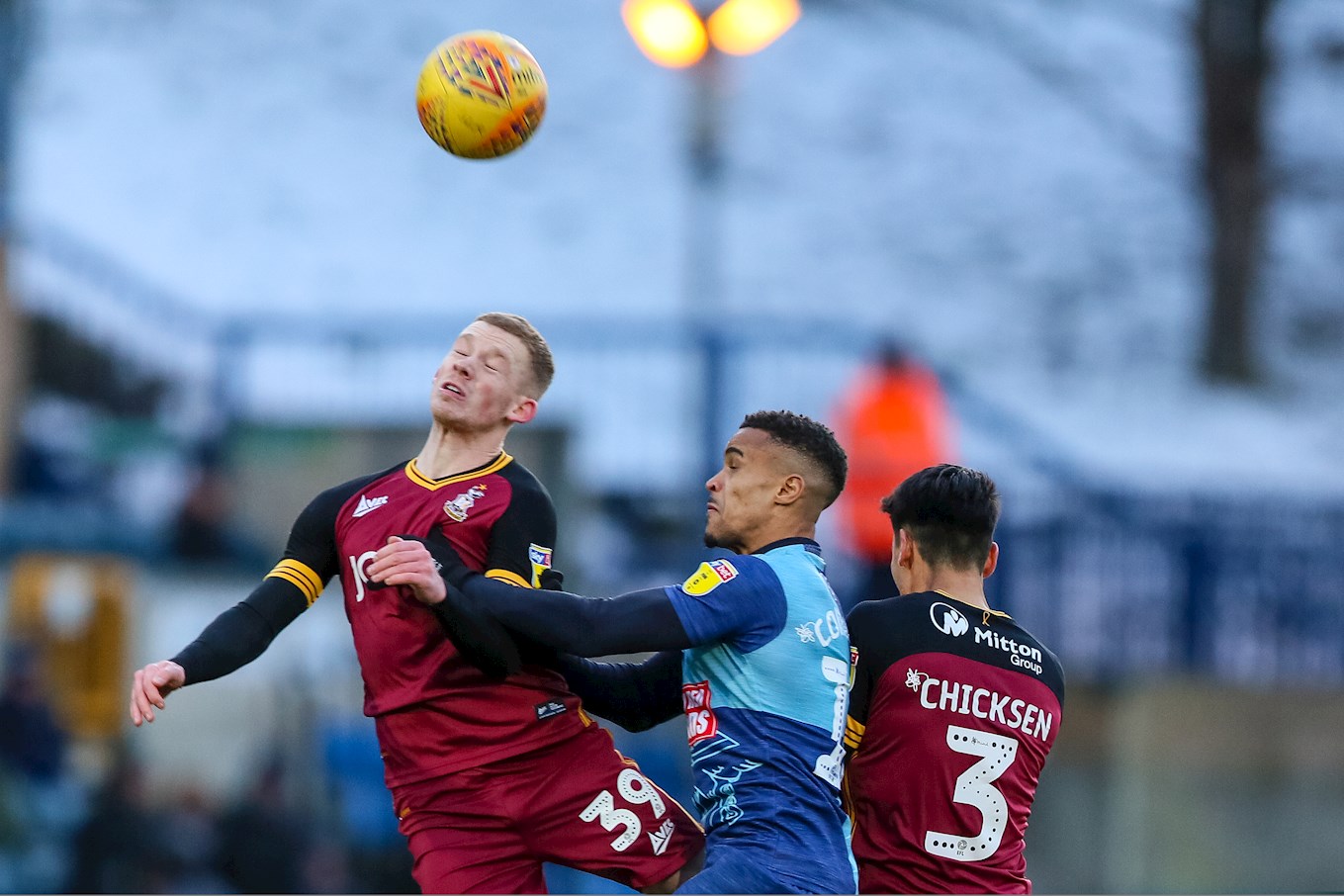 With City back on the attack, Akpan found Wood in space just inside Wycombe's penalty area and the leftie fired the ball dangerously across goal.

Doyle and Payne narrowly missed the centre in the middle as the ball flashed just past Wycombe's far post.

Another chance for the Bantams came twelve minutes from the end via a Payne corner.

The set-piece delivery was headed down into the mix by Knight-Percival but Joe Jacobson crucially headed clear from close range.

At this stage, Hopkin's side could have been dreaming of sneaking a winning goal, but it was Wycombe who actually finished the stronger in the game's closing stages.

There were home appeals for a spot-kick in the eighty-second minute when Caddis appeared to fall on the ball while trying to shepherd it out of play.

The fans in the stand behind the goal shouted for handball but Mr Bramall allowed play to continue.

A Jacobson corner three minutes from the end of normal time sparked a major scramble in City's defence, but Chicksen was on hand to importantly kick behind to clear the danger.

The final opening of the fixture also fell Wycombe's way just before the fourth official signalled for injury time.

McCarthy got himself free down Wycombe's right but his low cross from deep inside the box was fired wide by Kashket.

All in all then, plenty of positives to take for Hopkin's men as they saw out the three minutes of over-time that followed to claim the draw.

A point on the board away from home - building on the welcome success over Shrewsbury at the Northern Commercials Stadium in midweek and the 1-1 draw at Burton Albion last weekend - while it was also a boost to see the Bantams claim their first clean sheet in five games.

Led by the imposing figure of skipper O'Connor, City's defence stood strong when required to keep out a Wycombe side who had previously only failed to score once in all of their home league games since mid September.

Match line ups, stats and updates from the Wycombe game can be found via the Match Centre - HERE.