A memorable David Ball goal in the final seconds of injury time sensationally secured a dramatic victory for the Bantams following a seven-goal thriller with Shrewsbury Town at the Northern Commercials Stadium.

A ninety-third minute penalty from Shrewsbury striker Fejiri Okenabirhie looked have earned the visitors a draw, but Ball popped in the last attack of the game to superbly curl a winner into the far corner from an angle inside the box.

Ahead of Okenabirhie's penalty strike - a goal that sealed the forward's hat-trick - City had raced into a 3-1 lead thanks to a deflected goal from Jack Payne off Anthony Grant and two strikes from Lewis O'Brien and Eoin Doyle.

After netting his first goal earlier in the game to level up City's opener, Okenabirhie's brilliant free-kick fourteen minutes from the end of normal time set up the game's incredible finale.

Ball's amazing winning moment and the final whistle that followed seconds later sparked joyous scenes on and off the pitch, as all in claret and amber acknowledged of the importance of the victory.

City's win over Shrewsbury means David Hopkin's men are now only in the relegation zone on goal difference alone, with the Bantams just four points off sixteenth-placed Walsall in the League One table.

Following Saturday's draw at Burton Albion, Hopkin kept with an unchanged side for this Tuesday's rearranged fixture.

There was one change on the bench, however. Now free from suspension, Adam Chicksen was on City's substitutes' list ahead of Ryan McGowan.

On a bitterly cold night, it was perhaps no surprise that both sides took a while to warm up into the contest.

Just before the twenty-minute mark, though, City fired themselves into the lead for the first time on the night.

Ball's searching pass forward from deep was missed by James Bolton, giving Payne behind him a clear run into the box.

Payne turned towards goal from an angle inside the area and the attacker's low drive found the back of the net via the feet of Grant. 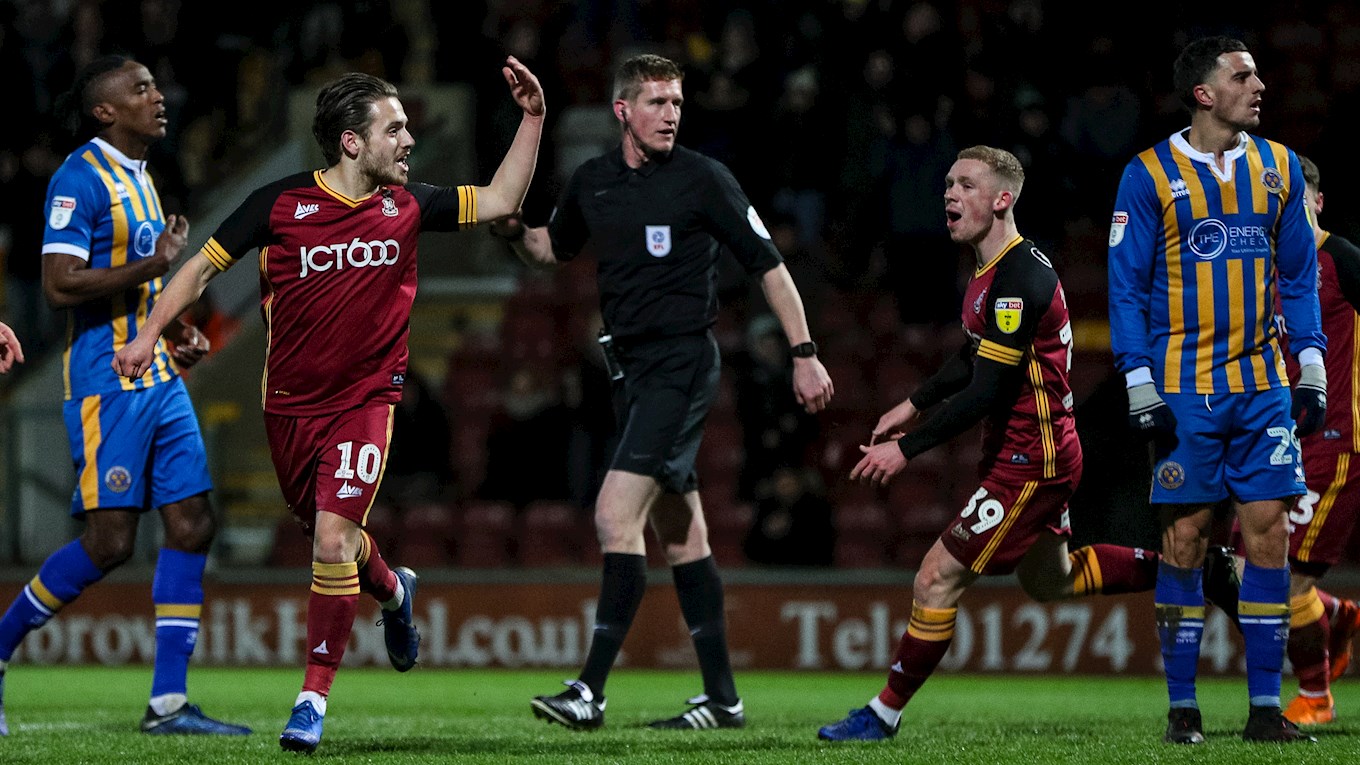 Ball warmed the hands of Steve Arnold with a drive from the edge of the box soon after, while Okenabirhie at the other end whistled a cross-come-shot from the left narrowly past Richard O'Donnell's far post.

The eye-catching striker for the Shrews wasn't denied for long, however, as he levelled things up for the visitors three minutes before the half hour point.

A well-timed through pass from Greg Docherty played Okenabirhie one-on-one with O'Donnell and the forward calmly slotted low past the Bantams shot-stopper.

In response to being pegged back, City saw Payne's low shot from distance held comfortably by Arnold.

Doyle then headed wide of the far post soon after from home debutant Calum Woods' cross into the box from the left.

With the game evenly-poised at this stage, Grant fired in a strike from outside the area that was held by O'Donnell.

Both sides continued to look closely-matched as the first period moved into its latter stages, but crucially it was City who struck again seven minutes before the break.

O'Brien initially tried to find Payne with a pass into the box. The ball broke back out to the midfielder again, though, and he proceeded to smash home a fantastic strike past Arnold from just outside the area.

Shrewsbury had one last chance to level things up before the interval, but Luke Waterfall headed wide of the far post after Omar Beckles had glanced a Docherty free-kick into his path.

Shrewsbury had made two changes by the time the game reached the hour mark in an attempt to once again get back into the match, but it was Hopkin's side who drove further in front fifteen minutes after the interval.

After Payne had seen a shot deflected away from inside the box, Ball latched onto the loose ball but he also had his effort for goal blocked away.

It proved third time lucky for the Bantams eventually, though, when Doyle stole in to crash home the loose ball for City's third of the night.

The Irishman could have actually doubled his tally for the evening just minutes later, but his close range strike hit the body of Arnold following Ball's low cross into the six yard box.

Despite City's advantage in the game at this stage, however, you could never quite rule the visitors out.

Twenty minutes from the end, Shrews sub Sam Smith was played into shooting space inside City's penalty area, but last-man Woods made a brilliant recovery tackle.

Sadly for City and Woods, though, the left back was forced off shortly afterwards with an apparent injury.

With City looking to see the game out, Shrewsbury were able to make things interesting when they pulled a goal back in the seventy-sixth minute.

After Ryan Haynes had been fouled by Hope Akpan just outside the box, Okenabirhie stepped up and produced a stunning free-kick that whistled past the despairing dive of O'Donnell and into the far top corner.

Although Shrewsbury were understandably eager to push men forward in search of their second equaliser of the night, City could have put themselves back in the driving seat just seconds later when Connor Wood found an unmarked Doyle in the box.

Doyle fired for goal but his left-footed drive was straight at Arnold.

As the match moved into a nervy final ten minutes of normal time, City needed a watchful Paul Caddis to be in position as Waterfall headed for goal from a Shaun Whalley corner.

Waterfall's headed effort was heading for the corner of the goal, but Caddis was on hand to block on the line with his chest.

The save looked a crucial one, but there was still more drama to come.

In the second of five minutes of time added on, Shrewsbury were awarded a spot-kick when Caddis brought down Whalley in the box.

Okenabirhie took responsibility for the resulting spot-kick, sending O'Donnell the wrong way to claim the match-ball.

That goal seemed to have dramatically claimed a share of the spoils for the visitors - but things weren't finished there.

City showed tremendous powers of recovery to climb off the canvas following that body blow to somehow go back in front once again.

In the final seconds of the match, Ball received possession off Paudie O'Connor over on City's right flank from a throw-in.

Ball drove into the box from wide before turning into shooting space and superbly bending a strike into the far corner.

The goal brought on incredible scenes in the stands and on the pitch at Valley Parade, as fans and players alike celebrated the amazing turnaround.

The final whistle a few seconds later was met by huge roars of approval; City fans in the home sections of the ground understanding perfectly well what a huge result that was for the Bantams.

Match line ups, stats and action from the Shrewsbury game can be found via the Match Centre - HERE.