As the Bantams prepare to host AFC Wimbledon this afternoon, we have prepared a Matchday Guide to remind you of what is on offer ahead of today's 5.30pm contest!

We would like to take this opportunity to give a warm welcome to today's sponsors:

As always we ask supporters to get to the ground as early as possible for the game. Turnstiles will be open in all sections from 4.00pm.

The 2018-19 season continues with the introduction of coloured season tickets and this is as follows:

Bradford City will come together on Saturday to pay tribute to the 56 supporters who tragically lost their lives in the 1985 Valley Parade Fire Disaster.

A minute’s silence will be held prior to kick-off as we remember those who sadly passed away almost 34 years ago, while tributes are paid to the people we have lost throughout the course of the 2018/19 season.

Staff will gather by the memorial earlier in the day, where a wreath will be laid as a mark of respect to those affected in 1985.

As well as those volunteers, Georgia Thornton will be selling her ribbons outside and around the ground.

This Saturday's edition of The Parader is dedicated to those whose lives were affected by the Bradford City fire on May 11 2019.

It shows a mother grieving whilst football players leap around her. It was sculpted by Patricia Mcallister and was donated by Sylvia Graucob who used to live in West Yorkshire but had moved to the island of Jersey at the time of the fire.

Programmes will be available to purchase in the Bantams Bar, McCall and Hendrie Suite for a limited time prior to kick-off.

The club would like to remind supporters that carrying pyrotechnics into a football ground or using them is strictly prohibited.

The EFL has reminded clubs and their supporters as to the potential safety implications and consequences that could occur as a result of pitch incursions taking place at any stage during the remaining League fixtures of the 2018/19 season.

The EFL understands thaxt the end-of-season fixtures are charged with emotion, as supporters experience the highs and lows of a league campaign finale.

However, with final home League matches taking place over the weekend, the safety of players, managers, fans and match officials must remain of paramount importance.

Supporters who encroach on the pitch risk facing a banning order as well as a criminal conviction, while the club they support could also face a fine.

Celebrations in the form of a ‘lap of honour’ upon the completion of a club’s final home League fixture could also be hindered, with players and staff unable to take to the pitch in the event of a pitch incursion.

Supporters are advised to enjoy the occasion, but be wary of the potential repercussions for entering the field of play.

As always, we seek to offer fans a wide range of options for watching games and provide a professional and match day experience.

For our match against AFC Wimbledon on Monday April 22, the dining option will be positioned in the Hendrie Suite.

This means - for suite members - that the Hendrie Suite can not be used.

Supporters with suite upgrades who normally use the Hendrie Suite can instead use the Legends Suite for this match, or indeed use the McCall Suite or 2013 Suite.

Once again, we would like to thank supporters in advance for their co-operation with these minor changes and hope that everyone will appreciate the Club’s attempts to offer the widest possible ranges of hospitality options to the followers of Bradford City.

Our popular matchday competition continues and one lucky supporter could walk away with the man of the match-worn shirt! 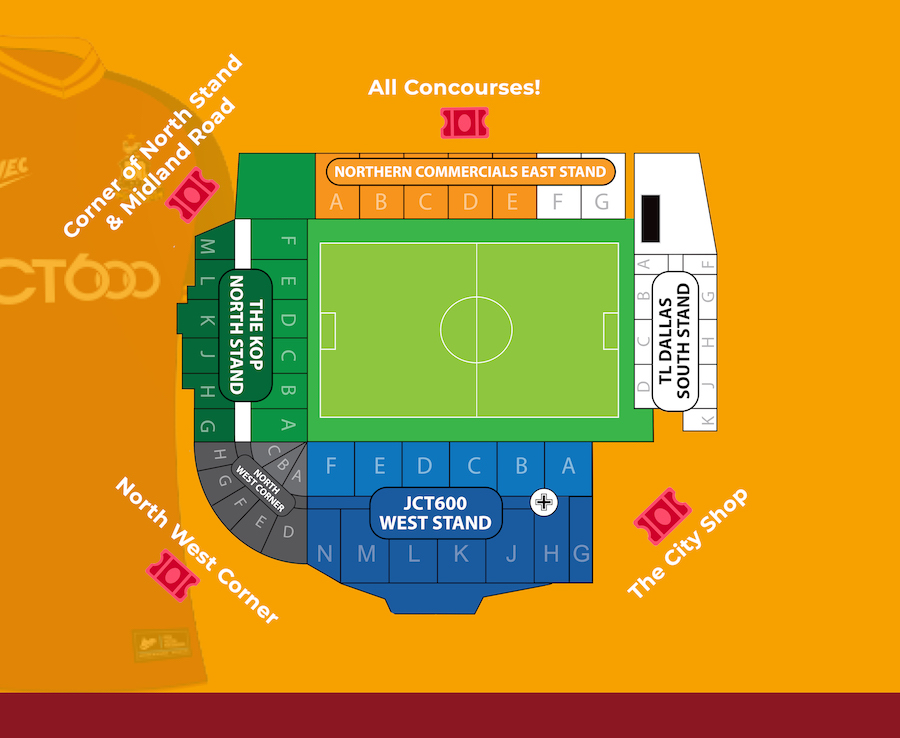 The Northern Commercials Stadium’s ticket office will remain open up until kick-off.

Season tickets and FLEXI CARDS are now on sale! One window will be dedicated to 2019/20 season ticket renewals/purchases tomorrow.

Get all of the latest merchandise in The City Shop which will be open between the hours of 9.30am and 5.30pm.