Firstly, we would like to extend a warm welcome to this afternoon's Big Match Sponsor, Friends of Bradford City, and Matchball Sponsor, The Shakespeare Hotel!

Supporters, staff and players will come together - before kick-off - to participate in a minute's silence to mark Armistice Day and remember the fallen.

The Bantams captain will lay a wreath in the centre circle on behalf of the club, with City's shirts also carrying poppies.

This afternoon's fixture will be held in aid of Samaritans.

Bucket collectors for the charity can be found in and around the Utilita Energy Stadium today, with supporters urged to support in any way possible.

WIN WITH ‘SHIRT OFF MY BACK’

Exeter have enjoyed a strong start to the campaign, sitting just one point off the top of the Sky Bet League Two table - in second place.

The Grecians finished ninth in the fourth tier - last season - having finished inside the Sky Bet League Two play-off positions in both of the previous two terms, prior.

Be sure to grab a copy of Issue 10 of The Parader this afternoon, on sale for just £3 around the Utilita Energy Stadium.

Connor Wood - who also features in 'The Big Interview' - is this week's cover star. 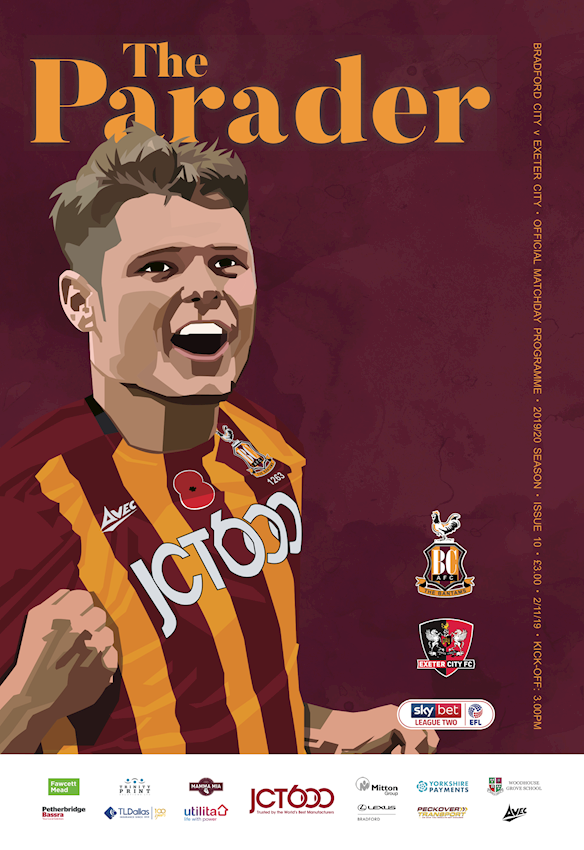 Other features include 'From The Top' with chairman Stefan Rupp, 'From The Dugout' with manager Gary Bowyer and the popular 'Bantams Board'.

And 'Junior Bantams Reporter', James Crickmore, offers his take on the Bantams' last outing, at home to Port Vale

Supporters are in for another rainy West Yorkshire afternoon, with temperatures set to linger around 9°C.