City look to book their place in the second-round of the Emirates FA Cup, in this evening's first-round replay at home to Shrewsbury Town.

The two sides played out a 1-1 draw in Shropshire - on November 9 - with a home tie against Mansfield Town awaiting the winner of today's affair.

The 7.45pm will see extra-time and penalties contested, if the two sides are level - after 90 minutes.

We have compiled a handy Matchday Guide - packed full of helpful information ahead of tonight's encounter.

City supporters will be housed in the bottom tiers of The Kop and JCT600 Stands, with travelling Shrews in blocks F and G of The Mamma Mia Stand.

Turnstiles will be open from 6.30pm, this evening.

Only blue badge holders are permitted to park on Midland Road, within the road closure, on a matchday.

Additional disabled car-parking spaces are now available near the One In A Million free school - on Burlington Street - and on Valley Parade.

The Shrews currently sit 11th in Sky Bet League One, after a mixed start to the 2019/20 campaign.

After their fixture at Doncaster Rovers - at the weekend - was also postponed, due to international call-ups, Salop have not contested a league fixture since their draw against City, in the first-round.

Be sure to grab a copy of Issue 11 of The Parader this afternoon, on sale for just £2 around the Utilita Energy Stadium. 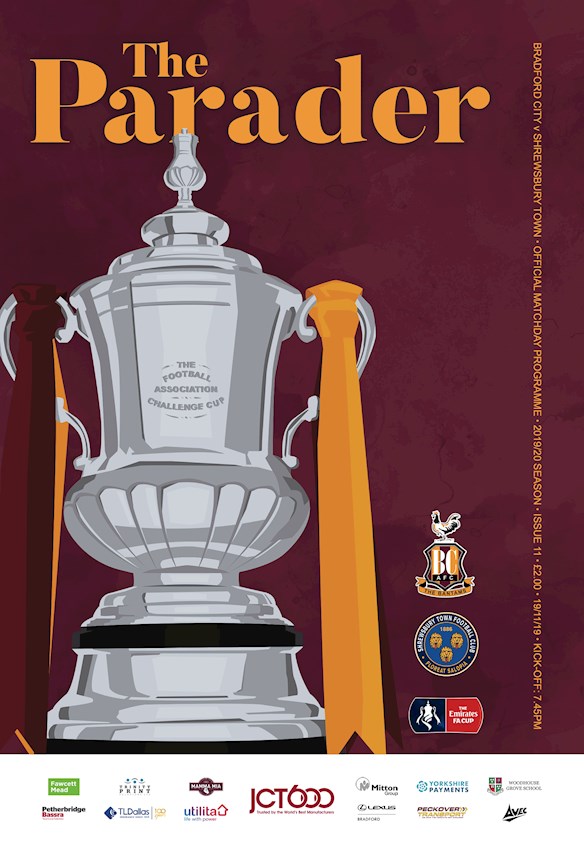 To maintain the cup fever, the centre spread contains iconic images from the Bantams' cup run of 2014/15, with 'A Historic Cup Run' documenting that memorable season.

Other features include 'From The Dugout' with City manager Gary Bowyer, and a report of Mark Trueman's under-18s side's triumph in the second round of the FA Youth Cup.

There is also a guide on tonight's opponents, on top of a 'Last Time Out' report of Jake Reeves' Bantams return, in last Tuesday's game against Rochdale.

The City Shop will be open from 9.00am until 5.00pm today to allow supporters another opportunity to get their hands on the Bantams’ 2019/20 home, away and third kits.

Supporters are in for a dry but chilly evening in West Yorkshire, with temperatures of around 3°C expected.