City go in search of their fourth consecutive victory when hosting Port Vale - this evening.

Firstly, we would like to extend a warm welcome to tonight's Big Match Sponsor, TL Dallas, and Man of the Match Sponsor, Bradford City Disability Football Club!

Turnstiles will be open from 6.15pm, this evening.

Kiosk's North 8 and West 4, in the Family Stand, will be closed for tonight's encounter.

Only blue badge holders are permitted to park on Midland Road, within the road closure, on a matchday.

Additional disabled car-parking spaces are now available near the One In A Million free school - on Burlington Street - and on Valley Parade.

Our popular matchday competition will be back in place for today's game, giving supporters the opportunity to walk away with a top prize of either the man of the match-worn shirt or £100 in cash!

Port Vale have endured a mixed start to the 2019/20 campaign and currently sit 16th in Sky Bet League Two.

The Valiants finished eight points from safety - last season - in 20th place and drew 1-1 at home to Stevenage, on Saturday.

Be sure to grab a copy of Issue Nine of The Parader this afternoon, on sale for just £3 around the Utilita Energy Stadium.

Anthony O'Connor - who also features in 'The Big Interview' - is this week's cover star. 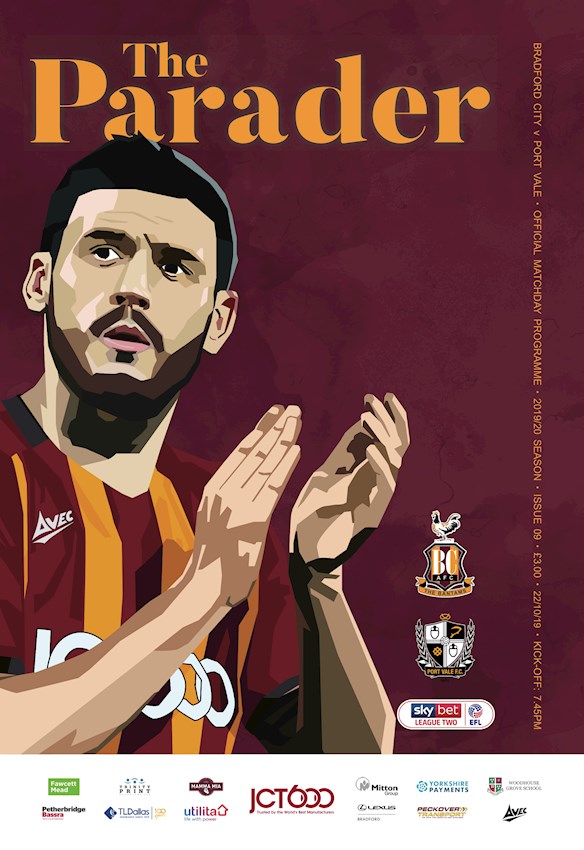 The defender discusses City's start to the season and how manager Gary Bowyer has helped changed the atmosphere at the club after a disappointing 2018/19 campaign.

'Junior Bantams Reporter' James Crickmore returns for his third outing - with a report on the Bantams' 2-1 triumph over Crawley Town - on Saturday.

Other features include 'From The Top' with interim chief executive Julian Rhodes, 'From The Dugout' with manager Gary Bowyer and various 'In The News' columns.

The City Shop will be open from 9.00am until 5.00pm today to allow supporters another opportunity to get their hands on the Bantams’ 2019/20 home, away and third kits.

Supporters should be in for a dry evening for today's game, with temperatures set to remain at around 9°C.