The Bantams are preparing for their return to the Utilita Energy Stadium, hosting Swindon Town this afternoon (3.00pm).

Today's game sees the return of safety netting which has been installed to the first three rows of seating in The Kop (North Stand).

This comes as a result of FA investigations into pitch encroachment, following recent home fixtures against Northampton Town and Carlisle United.

Today’s match will be contested in aid of the Darby Rimmer MND Foundation.

The charity - set up by City legend Stephen Darby and close friend Chris Rimmer - is designed to raise awareness and funds towards a cure for motor neurone disease, following ‘Darbs’’ diagnosis, last year.

With this afternoon’s opponents - Swindon Town - also keen supporters of the fund, with the club among another of Darby’s former sides, today’s clash promises to be one to be savoured, by all involved.

Bucket collectors and volunteers on behalf of the foundation can be found in and around the ground.

The club urges supporters - wherever possible - to please donate towards this fantastic cause.

Prior to today's encounter, a minute's applause will be held for Peter Downsborough who, last week, sadly passed away - aged 76.

A highly-rated goalkeeper, Peter appeared - in great distinction - for both the Bantams and this afternoon's visitors - Swindon Town throughout the 1960s and 70s.

Both clubs and sets of supporters are asked to pay their repsects.

Our popular matchday competition will be back in place for the opening match, giving supporters the opportunity to walk away with a top prize of either the man of the match-worn shirt or £100 in cash!

Today's visitors achieved a 13th-place finish in the fourth tier, last season, with this their third consecutive season in the division.

Be sure to grab a copy of Issue Seven of The Parader this afternoon, on sale for just £3 around the Utilita Energy Stadium.

Adam Henley - who also features in 'The Big Interview' - is this week's cover star. 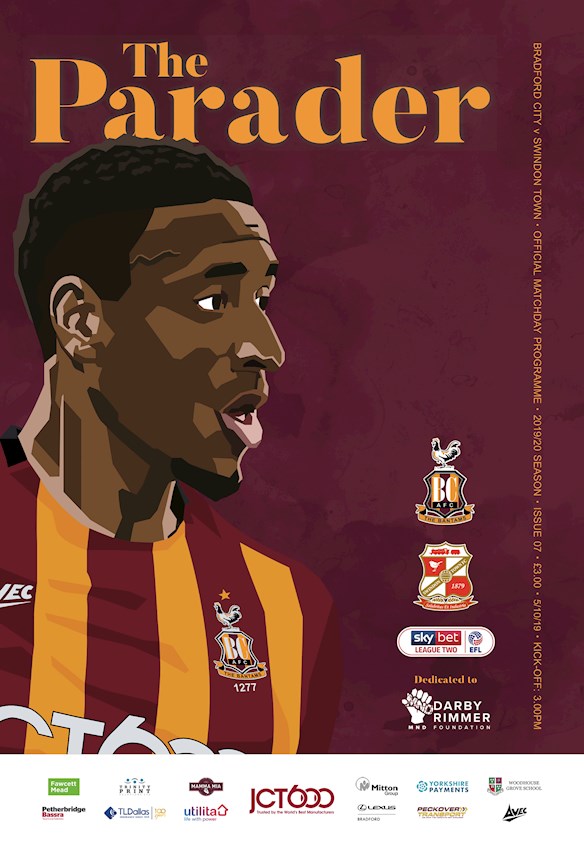 The full-back discusses his bid to reclaim his spot in the Bantams' starting 11, following a spell on the sidelines - with injury.

The 25-year-old also breaks down his relationship with manager Gary Bowyer and his spell in the USA, on top of what it means for today's contest to be dedicated to the Darby Rimmer MND Foundation.

Other features include 'From The Top' with interim chief executive, Julian Rhodes, 'From The Dugout' with manager, Gary Bowyer, and the popular 'Bantams Board'.

Conditions will remain dull, this afternoon, with a 10% chance of rain and highs of 13°C.