The highly-anticipated 'The Premier League Years' book is set to enter the production phase over the coming weeks.

The upcoming ACA Creative publication was originally due to be released in May though, because of issues with paper and photography reproduction - as a result of the ongoing threat of the COVID-19 pandemic - a decision to delay its launch was made.

The club will continue to honour every order of the publication - including those set to be delievered free of charge to supporters who renewed their 'City For All' season tickets, prior to midnight on Wednesday March 25.

Supporters' names will still appear in the advanced subscriber list, at the back of the book, if they pre-ordered before February 14.

As part of the 20-year anniversary of City's promotion to the Premier League, this historical book will look back on and cover the two memorable seasons spent in England's top flight.

Priced at just £19.99, the book provides a magical insight through what was an amazing journey.

Also included will be a collection of mainly-exclusive photographs from the two campaigns - many of which have never been published before.

Limited edition hardback versions of the book are also available to purchase - for £59.99.

With only 250 of these copies to be produced worldwide, these books will be signed by two Bantams legends - including Stuart McCall - and come with free postage and packaging when pre-ordered. 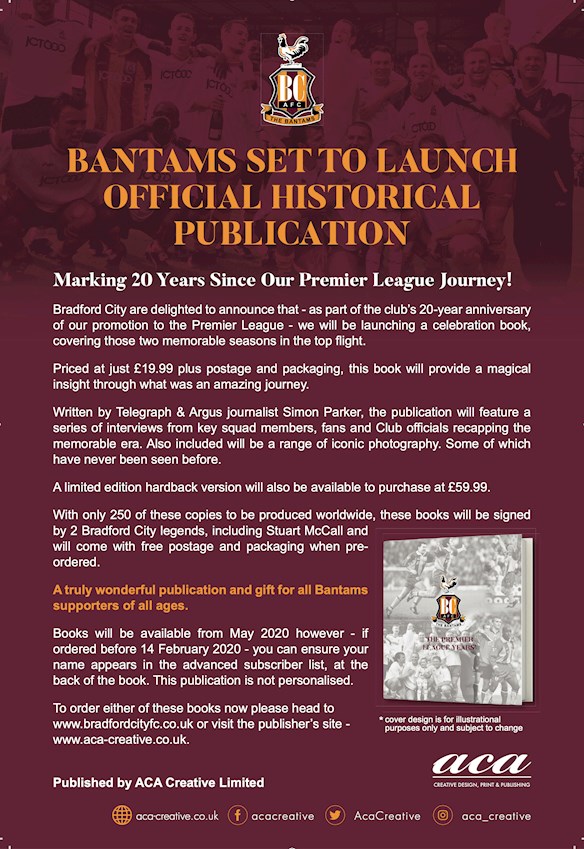 The club and ACA Creative are working tirelessly to ensure this book can be delivered at the earliest-possible opportunity and will keep supporters who have placed an order informed - via e-mail.

We would like to take this opportunity to thank you for your patience throughout this challenging period.

Copies can still be pre-ordered, by CLICKING HERE.