The below report has been compiled by Alan K Biggin FCA, club director and chartered accountant.

As with most smaller businesses, we have taken advantage of the opportunity to file filleted, abridged accounts which, although limited in detail, enable us to comply with the appropriate legislation.

However, as we fully acknowledge and understand, the club is more than the sum of its shareholders, directors and officers. It is a vital community asset - sometimes unifying, often vilified, but always reflecting those exquisite highs and despondent lows of that shared experience.

It is also important, for everyone with an interest in our club, that there is an openness and understanding of what has occurred over the previous accounting year. Consequently, I am summarising some additional context to the financial statements filed at Companies House.

The indicative figures which are most commonly discussed are extracted from the books, records and financial statements of account - and are set out below:

I will take the opportunity here to explain how these statements inform us, as to the wellbeing of the club.

As we are all aware, the COVID-19 restrictions triggered the curtailment of the 2019/20 season and some consideration must be given to this with the club receiving significant furlough payments and much smaller grant monies.

First and foremost, the club must remain financially stable and be in a position to generate income from its own various activities and cost centres, so that it does not need to rely on external sources such as shareholders or other lenders. This may not be a spectacular strategy, but remains a cardinal principle.

In today’s climate, the position is even more tenuous as clubs fight to survive. Spiralling costs and reduced income will have their way, should constraints not be imposed. Bury FC and Macclesfield Town are both testament to that.

Revenue has increased by 18% over the period, principally because of the receipt of £2.6m of transfer income. It will be of no surprise that the majority of this relates to the sell-on fees as a result of the 2015 sale of Oliver McBurnie.

Transfer fees remain an important part of our income generation policy, and it is hoped this will continue despite exponential changes which may be manifested.

Some schools of thought consider youth development to be a costly exercise. However, when one considers the benefits this football club has had over the years, it may be time to put that particular line of argument firmly to bed.

We continue with the affordable season-tickets policy as it is effective and has been successful. Not for every club, necessarily, but certainly in a large city such as Bradford with a low income economy, it is a significant factor in ensuring season tickets are taken up in bulk.

We took relevant measures to protect the club from the commencement of the COVID-19 pandemic and have taken advantage of the Government’s Coronavirus Job Retention Scheme in respect of the period from March 2020 to June 2020, when most of our staff - including the playing squad - were placed on furlough following the premature ending of the Sky Bet League Two season. This also involved the top-up of the 80% provided by the scheme to protect employees and their families.

Not surprisingly, football wages, salaries and on-costs remain a major outlay to the football club. These costs have decreased from £3.6m in 2018/2019 to £2.9m in the 2019/20 season. It should be noted that, in both these years, charges are within the spending constraint framework termed ‘Salary Cost Management Protocol (SCMP)’, which links clubs spending in Sky Bet League Two to 55% of their turnover.

It should also be noted that the club was carrying over heavy wages (long-term contracts) from its grossly-overspending summer of 2018, which resulted in relegation to the fourth tier. The definition of ‘turnover’ for EFL purposes is rather wider drafted than SCMP rules, and allows donations and injections of equity from owners to be included in turnover.

The club will have no problem remaining within the desired parameters and considers all such rules to be part of a policy of good, sound financial management - which is completely necessary for the future of Bradford City AFC.

For better understanding, we set out below figures - showing a more graphic explanation of the club’s running costs. 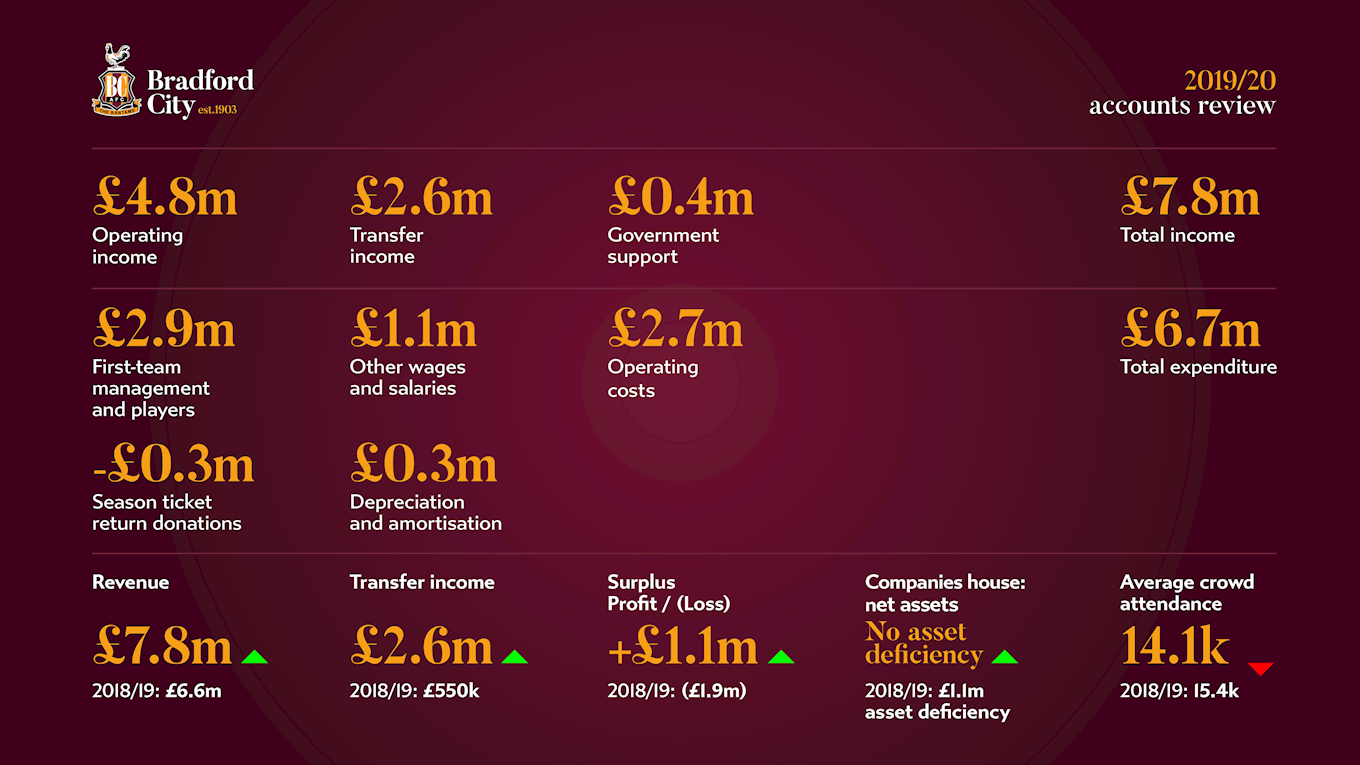 As is quite apparent from the graphic, the transfer income is substantial and, without this contribution - which, by its nature, is something of a rarity - the club would have reported a substantial loss for the year.

Consequently, as realised by many of the clubs at our level, football costs and - in particular - wages and salaries, have had to be reviewed and will continue to be so, to ensure the club remains commercially viable.

During the year under review, there has been little expenditure on the stadium and other fixed assets, although it is policy to improve assets wherever possible, within the available financial limitations.

The current net-asset position has improved exceptionally, due to the large input from transfer income. As a result, the club’s balance sheet has become positive, as opposed to its previous negative state.

The net-asset position includes the cash balances of the club, which are significantly enhanced by the sale of season tickets and then gradually exhausted by the club’s normal financial activities.

This is quite common with football clubs, and it is a mark of our club as to how this is managed. Further funds are unfortunately often required, and this remains one of the major issues for clubs at all levels.

The pandemic has proven a difficult time for the football industry, and we have been fortunate to weather the storm to some extent, even though income streams have significantly diminished. In such times, imagination is a prerequisite and necessity proves to be the mother of invention. For example…

- Supporters have been wonderfully supportive by way of not claiming refunds on season tickets and hospitality packages.

- The club has found new ways to generate income.

- Continued support of our marvellous commercial and community partners.

- The financial support of the EFL and footballing authorities, including the Premier League.

As referred to earlier, in the body of this analysis, we continue to adapt and review with constant forecasting, budgeting and problem assessing.

Speaking as an accountant, with more years’ experience than I care to admit to, it may seem I am being somewhat conservative and erring on the side of excessive caution. I guess that goes with the space.

Financial stability and discipline, coupled with realistic long-term commitment, will enable this club to progress. Under the direction of the chief executive officer, Ryan Sparks, a renewed, long-term vision has been instilled at the club - at a time when spirits had been low.

Not unreasonably, there is a degree of optimism about, but I will refrain from the expression ‘a sleeping giant’, as such cliches tend to jaundice opinion and encourage the cynics.

It would now seem opportune to allow Ryan to provide his own valediction, interpretation of events and thoughts for the future.