Bradford City AFC is delighted to announce a total of 12,715 ‘Take Me Home’ season-ticket sales ahead of the 2021/22 season.

Going on sale on Monday May 24, this year’s season-ticket campaign saw a revamped pricing structure introduced, with an Adult (24-64) paying just £198 - which works out at less than £8.61 per home match.

Following a recent survey on the potential future of ticketing and access at the Utilita Energy Stadium, supporters were also able to secure their season ticket via direct debit, evenly spreading the cost over the course of 12 months.

The club will welcome 2,107 new season-ticket holders for the 2021/22 season, who have secured their seat at Valley Parade having not purchased since 2018/19 at the most recent.

A total of 3,346 supporters purchased their ‘Take Me Home’ 2021/22 season ticket via the all-new direct-debit subscription package, while 884 supporters converted their FLEXICARD - which has been discontinued - to a full season ticket.

A large proportion of the 3,006 supporters who opted not to renew their season ticket ahead of the coming campaign is made up of those who decided against converting a FLEXICARD renewed ahead of the 2018/19 season. 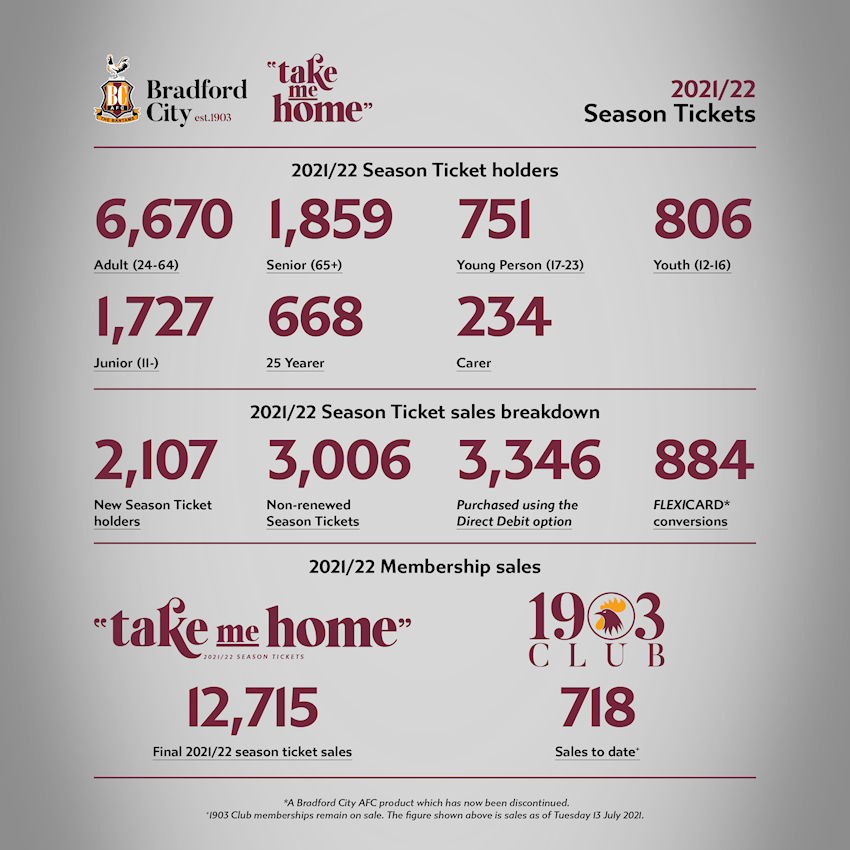 As part of this, for just £35, you will receive a whole host of benefits, including your name and discount on an limited-edition fourth shirt to be worn by the Bantams this season, an exclusive membership pack, breaking club news via e-mail before non members and much, much more.

City’s chief executive officer, Ryan Sparks, said: “I would like to take this opportunity to thank everyone for your incredible support, throughout what were still rather uncertain times, as we launched our ‘Take Me Home’ 2021/22 season-ticket campaign.

“The final figure of 12,715 is one we are delighted to have reached. One which gives us immense pride heading into August.

“These numbers have provided us with much more scope for various budgets across the board, and more than justify the investments we have made in departments both on and off the field over the past eight months.

“We are thrilled to be welcoming over 2,000 new season-ticket holders, who have not been to Valley Parade as a season-ticket holder since 2019/20 at the most recent. The majority of these 2,107 supporters, however, have never actually held a season ticket before.

“The introduction of our all-new direct-debit scheme has given supporters flexibility they have never had, in spreading the cost of their payment over 12 months, and this has largely paved the way for new season-ticket holders.

“While overall sales are down on the 2018/19 season, a significant number of supporters have chosen not to convert their FLEXICARD to a full season ticket. We are, however, comfortable with our position on this, having seen over 60% of FLEXICARD holders make the switch.

“The 1903 Club is an exciting membership we have launched ahead of next season, with all proceeds raised from it being driven straight into Derek Adams’ playing budget.

“It has been a great start for a product still very much in its infancy, and we are hoping sales for this can pass the four-figure mark before the purchase deadline at the end of July.

“I once again want to thank each and every one of the 12,715 of you who will be with us next season.

“Your support will no doubt drive Derek and the players on to hopefully achieve our ambitions. We cannot wait to have you back at Valley Parade again - after so long - and hope for the successful season on the field which you all deserve.”