These figures comprise an average of the results from surveys completed after all four home matches throughout October - against Rochdale, Hartlepool United, Bristol Rovers and Forest Green Rovers.

Results show an increase on August's scores in seven of the 15 categories. Four areas show a decrease in scores, while the remaining four categories' scores have remained the same.

The average supporter spend was in the £5 to £10 bracket, the same as in September, while 89% of those asked would recommend a City home game to friends and family (down from 97.5% last month) - with 5% of these very likely to recommend (no change).

The club also carded scores of 4.4 out of 5 for engagement with supporters compared to other clubs visited - which is down on September - and 4.7 out of 5 on entry to the stadium satisfaction, satisfaction on stadium exit and interaction with stewards while at Valley Parade, with all three of these remaining categories showing an increase on their respective September scores.

Finally, supporters’ experience at the Utilita Energy Stadium box office scored 5.8 out of 10 (decrease), though supporters' experience in Valley Parade’s hospitality facilities scored 9.9 out of 10, which shows a significant increase.

Average results from questions in the October 2021 supporter matchday experience survey are as follows:

- Engagement with supporters in comparison to other clubs you have visited - 4.4/5 (SEPTEMBER: 4.5/5)

- How many supporters purchased The Parader - the club’s official matchday programme? - 2 in every 10 (SEPTEMBER: 3 in every 10)

- Of those asked, what percentage of supporters would recommend a Bradford City AFC home game to their friends and family? - 89% (SEPTEMBER: 97.5%)

- How would you rate your experience in the Utilita Energy Stadium’s hospitality facilities - 9.9/10 (SEPTEMBER: 6.5/10) 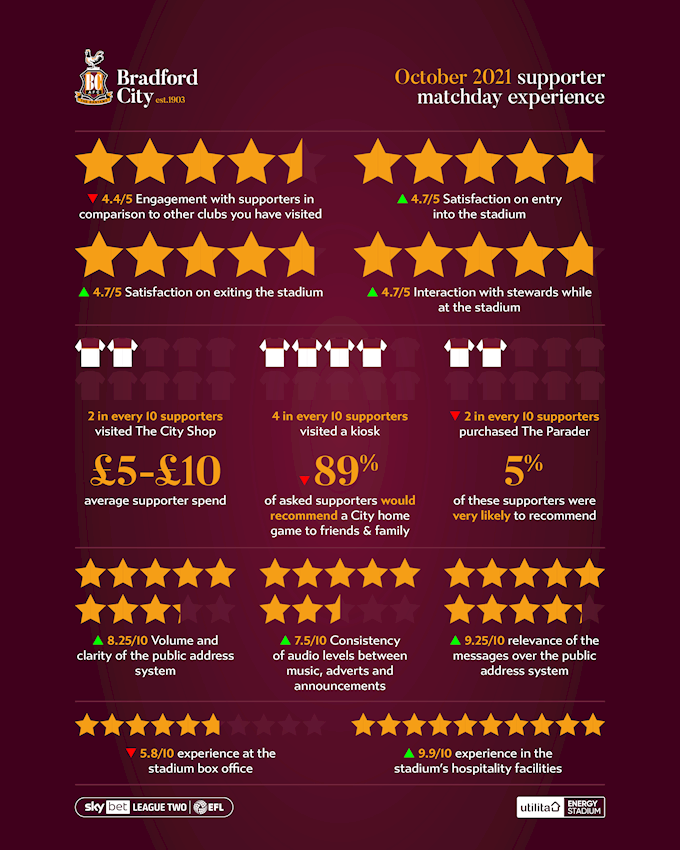 Average results from November's supporter matchday experience survey will be released at the beginning of December. Results will continue to be shared throughout the duration of the campaign.