Bradford City AFC can today announce the launch of an official Mental Health Supporters’ Group - open to each and every City supporter - as part of World Mental Health Day 2021.

Open to supporters and members of the wider local community of any age, gender, race, religion, ethnicity or sexual orientation, the Mental Health Supporters’ Group will be hosted by City supporter and former Mental Health Clinician and Associate Practitioner - and current Project Manager for Health - Robert Cranmer. 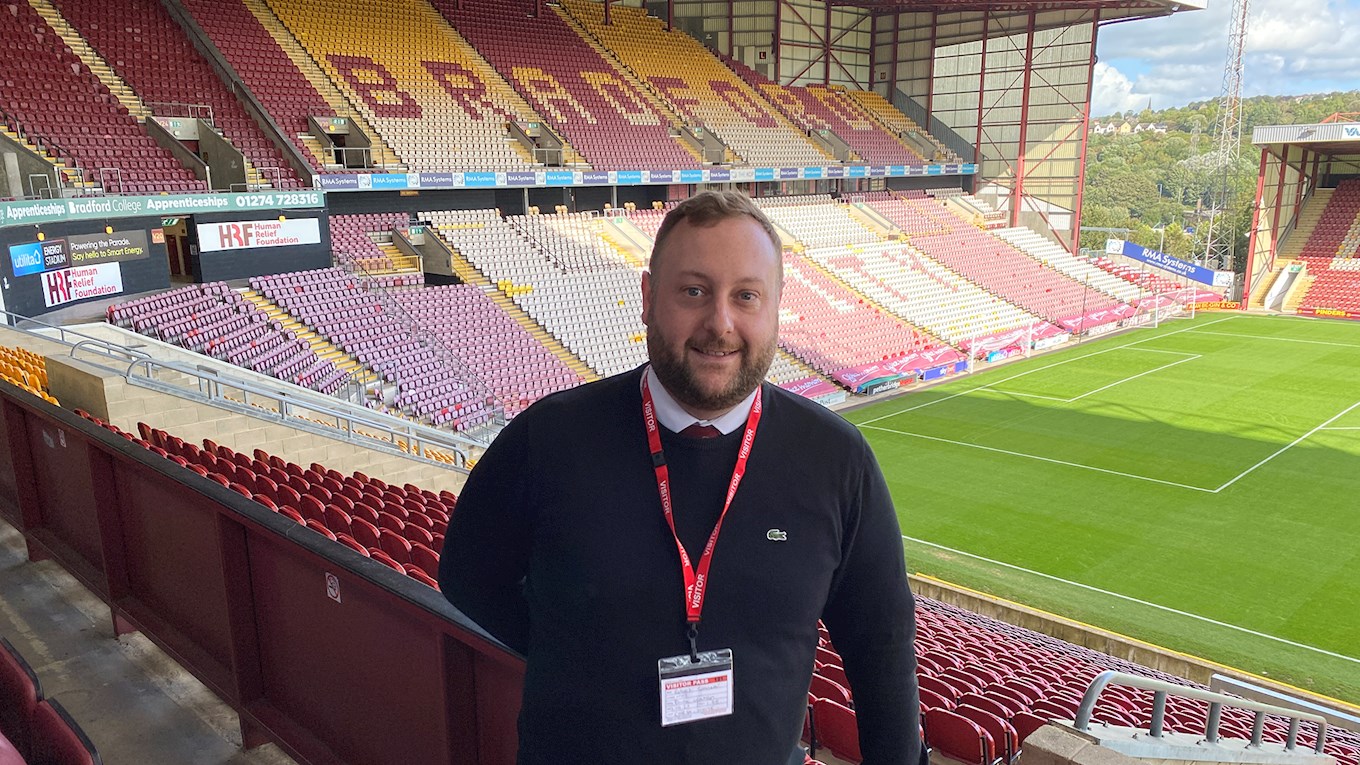 Supporters will be able to apply for advice by downloading, completing and returning a bespoke referral form - to mentalhealthsupportersgroup@bradfordcityafc.com - which will then be reviewed by Mr Cranmer before the most suitable course of action is explored.

Group supporter sessions will be held, as well as advisory one-on-one consultations for supporters who do not currently require general practitioner intervention. These would be held virtually, or face to face where possible.

Advice will strictly be of a non-clinical nature only, meaning there will be no prescriptions or referrals to a general practitioner, though supporters are encouraged to speak with Robert on anything they feel they may need to, and reach out for help.

PLEASE NOTE: All referral forms and consultations will be treated with the strictest confidentiality, and not shared with anyone outside the Mental Health Supporters’ Group, unless safeguarding concerns arise.

To download and complete a referral form for the attention of Robert Cranmer, please CLICK HERE, and return the completed form - via e-mail - to mentalhealthsupportersgroup@bradfordcityafc.com.

The club’s partnership with Andy’s Man Club will incorporate a dedicated home matchday this season - against Salford City on Saturday January 15 - where activities will be hosted and awareness spread of the work being done.

In addition, Andy’s Man Club will host a support group for any City supporters over the age of 18 - of any gender - to attend and speak openly about their feelings, on Wednesday November 3. Full details on this will be announced in due course.

Founded in 2016, Andy’s Man Club is described as “a talking group, a place for men to come together in a safe environment to talk about issues and problems they have faced or are currently facing”. It was formed by former Ireland international rugby league player Luke Ambler and his mother-in-law, Elaine, after his brother-in-law took his own life.

It now operates over 55 groups across the UK, and continues to expand, running sessions every Monday evening at 7.00pm (excluding Bank Holidays). Its Bradford-based club opened in 2017.

Speaking on the launch of Bradford City AFC’s Mental Health Supporters’ Group, Mr Cranmer said: “I have personally suffered with mental health difficulties and anxiety, myself, in the past.

“This is the biggest reason why I am excited to be taking on this role, to offer advisory support to our incredible supporters.

“As a former Mental Health Clinician and Associate Practitioner - and current Project Manager for Health - I have been very passionate about the club introducing this, and it is great to see it come to life and have its full support - and that of Oscar Threlkeld.

“It is so important to reach out for support and advice when you feel you need it. Sharing your story with someone who has suffered previously can be enough to change a life, and save a life.”

Threlkeld added: “There is nothing worse than keeping everything inside you, because it all builds up and has nowhere to go. I do advise people to speak up.

“If you do feel you need to have that chat with someone - whether it is a friend, neighbour, family member or even your manager or a psychiatrist - please do.

“I have had depression before, and have had a taste of how it can affect the brain and, personally, performances on the pitch.

“As a footballer, you come in and train, and your mind is not really on anything else other than football. Then, you go home and are left to your own devices in what you choose to think about, which can sometimes be dangerous.

“The best thing to do is speak about it, so I am pleased to be the club’s official mental health ambassador to try and encourage this, because once you speak out, things become so much easier.

“The Mental Health Supporters’ Group is a great initiative and very important resource for people who feel they need help, and I am looking forward to helping as many people as possible, in whatever way that may be.”

Neil Waine of Andy’s Man Club Bradford said: “To be involved with such a famous club is very humbling and exciting, and we are looking forward to a great relationship moving forward.

“As a Bradfordian myself, I know the challenges that the people of Bradford face on a daily basis. At Andy’s Man Club, we aim to give any man over the age of 18 a non-judgemental, confidential and safe environment to come and talk openly and confidently about the troubles they may be experiencing.

“You do not need to be suicidal or depressed to attend Andy’s Man Club. You may just want to be a part of something - to break from possible social isolation or be with like-minded men for peer-to-peer support, from a point of lived experience.

“The door of Andy’s Man Club is a difficult one to get through but, speaking from personal experience, I can confidently say that it is the best door any man can take the step to walk through.

“Our Bradford club has been running for a couple of years, now, and is averaging around 30 men attending every Monday night.

“The guys running the club, and those at every other club across the UK, are just everyday men who have been through their own storm - or may still be going through their storm - and we just want to make sure that door is open every Monday night at 7.00pm to give other men the opportunity to get the stuff off their chest that they need to - in the same way they were afforded when they first walked through the door at AMC.

“The fact Bradford City have chosen to partner with us at Andy’s Man Club is fantastic for us but, more importantly, it is important for the men of Bradford who do not know who we are - to now know they have somewhere to go to let their woes out and find a better tomorrow.

“Added to that, Bradford City player Oscar Threlkeld also stepping up as the club’s mental health champion is absolutely huge, and really shows that #ItsOkayToTalk.

“We look forward to working with Oscar, the football club and other mental health support groups and organisations to bring a great support network to the fans of Bradford City, and the wider Bradford community.”

To read more about Andy’s Man Club and the work it does, please CLICK HERE.

To download and complete a referral form for the attention of Robert Cranmer, please CLICK HERE, and return the completed form - via e-mail - to mentalhealthsupportersgroup@bradfordcityafc.com.