These figures comprise an average of the results from surveys completed after both home matches throughout August - firstly against Oldham Athletic and then against Stevenage.

The average supporter spend was in the £5 to £10 bracket, while 100% of those asked would recommend a City home game to friends and family (with 4.25% of these very likely to recommend).

The club also carded scores of 4.5 out of 5 for engagement with supporters compared to other clubs visited, 4.7 out of 5 on entry to the stadium, 3.9 out of 5 for satisfaction on stadium exit and 4.25 out of 5 on interaction with stewards while at Valley Parade.

Finally, both supporters’ experience at the Utilita Energy Stadium box office and in Valley Parade’s hospitality facilities scored 6 out of 10.

Average results from questions in the August 2021 supporter matchday experience survey are as follows:

- Engagement with supporters in comparison to other clubs you have visited - 4.5/5

- Interaction with stewards while at the stadium - 4.25/5

- How many supporters purchased The Parader - the club’s official matchday programme? - 4.5 in every 10

- Of those asked, what percentage of supporters would recommend a Bradford City AFC home game to their friends and family? - 100%

- The consistency of audio levels between music, adverts and announcements - 6/10

- How would you rate your experience at the Utilita Energy Stadium box office? - 6/10 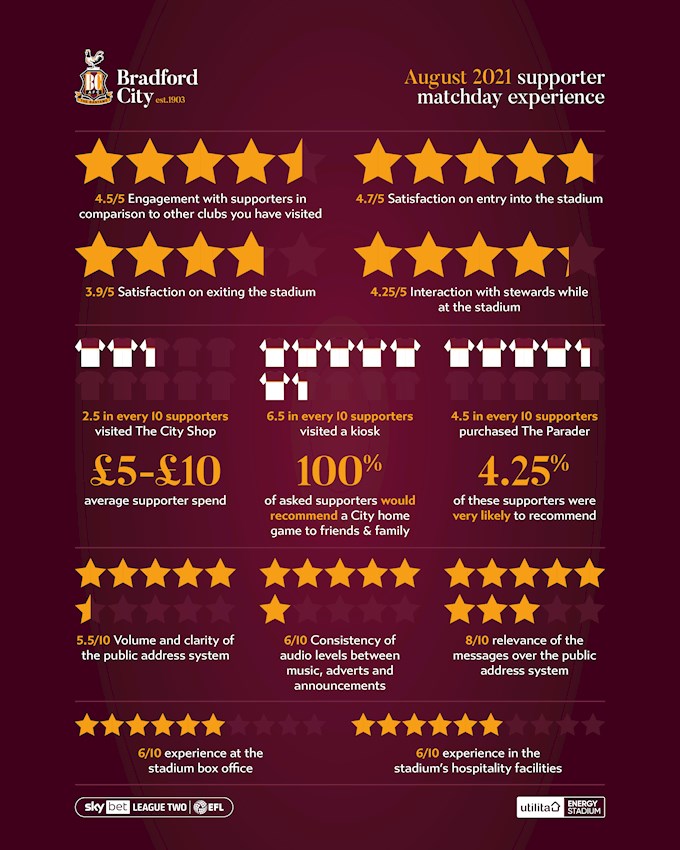 “We value feedback and act upon it as soon as possible in order to ensure we continue to offer an enjoyable matchday experience.

“While not every single piece of feedback can be dealt with immediately, it certainly helps with future planning in terms of where we may place budget for enhancements in the months and years ahead.

“These surveys, which are very important to us - and which we are very grateful for your participation in - allow us to act on facts and real evidence, rather than sporadic opinions of staff and supporters alike.

“As I have stated on many occasions, progress is being made, but these results are a reminder of the work that each and every one of us here at Valley Parade knows needs to be completed. Our attitude is that we will never be satisfied, and these surveys are further evidence of that.

“We have chosen to share these results publicly in line with our values of remaining honest, clear and transparent as far as possible, and hope to see scores improve as the season continues. We thank you again for your crucial feedback, as we aim to continue building a better Bradford City for everyone.”

Average results from September’s supporter matchday experience survey will be released at the beginning of October. Results will continue to be shared throughout the duration of the campaign.