The below report has been compiled by Alan K Biggin FCA, club director and chartered accountant.

Unlike previous years, we have decided to file a fuller set of financial statements to provide supporters and other interested parties with more background to the year’s activities. This is particularly relevant to the ‘Directors Report’, which provides a strategic ‘Business Review’.

The club is more than the sum of its shareholders, directors, and officers. It is an important community asset - always reflecting those exquisite highs and despondent lows of that shared experience.

It is also important, for everyone with an interest in our club, that there is an openness and understanding of what has occurred over the previous accounting year. Consequently, I am summarising some additional context to the financial statements filed at Companies House on Thursday March 31.

The indicative figures which are most discussed are extracted from the books, records, and financial statements of account - and are set out below:

- Revenue: £5.4m (2019/20: £7.8m) - As a result of the COVID-19 pandemic, no supporters were allowed to attend football matches as part of the Government’s response to the global crisis, which had a dramatic impact. Revenues decreased by 31%.

- Crowds - Average Attendances: 0 (2019/20: 14,138) - As explained above, crowds were not allowed to attend football matches. Fixtures at the Utilita Energy Stadium were played entirely behind closed doors.

I will take the opportunity here to explain how these statements represent the club’s financial position and the difficulties it has experienced during the year under review.

As we are all aware, the COVID-19 restrictions triggered the curtailment of the 2019/20 season but also significantly affected the 2020/21 season with the largely prohibited attendance of supporters at all matches.

First and foremost, the club must remain financially stable and be able to generate income from its own various activities and cost centres, so that it does not need to rely on external sources such as shareholders or other lenders. As a consequence of the above realities, gate receipts, matchday income, season-ticket sales and all commercial activities have been materially affected, although income from iFollow has had some mitigating effect to the value of £529,156.

Transfer fees remain an important part of our income generation model. However, for the year under review, this income stream has greatly diminished from the previous year and has been a significant contributory reason for the loss which has been generated.

The club is likely to continue with the affordable season-tickets policy as it is effective and has been successful. This also comes during a time where so many throughout our region have been financially impacted as a consequence of the pandemic, and so the club sees it as its responsibility to not add to this economic burden. Not for every club, necessarily, but certainly in a large city such as Bradford with a low-income economy, this is a significant factor in ensuring season tickets continue to be viable for supporters.

The club continued to take advantage of the Government’s Coronavirus Job Retention Scheme in respect of the period from July 2020 to June 2021, where some staff were placed on furlough. This also involved the top-up of the percentage provided by the scheme to protect employees and their families.

As always, football wages, salaries and on-costs remain a major outlay to the football club. These costs have been maintained at £2.7m for the current season compared to £2.9m previously. It should be noted that, in both these years, charges are within the spending constraint framework termed ‘Salary Cost Management Protocol (SCMP)’, which links clubs spending in Sky Bet League Two to 55% of their turnover. This may very well be an issue for some other clubs in the future, particularly for those promoted from the National League where no current restrictions exist. The definition of ‘turnover’ for EFL purposes is rather wider drafted than SCMP rules and allows donations and injections of equity from owners to be included in turnover.

Our club will have no problem remaining within the desired parameters and considers all such rules to be part of a policy of good, sound financial management, which is completely necessary for the future of Bradford City AFC.

For better understanding, we set out the below figures - showing a more graphic explanation of the club’s running costs. 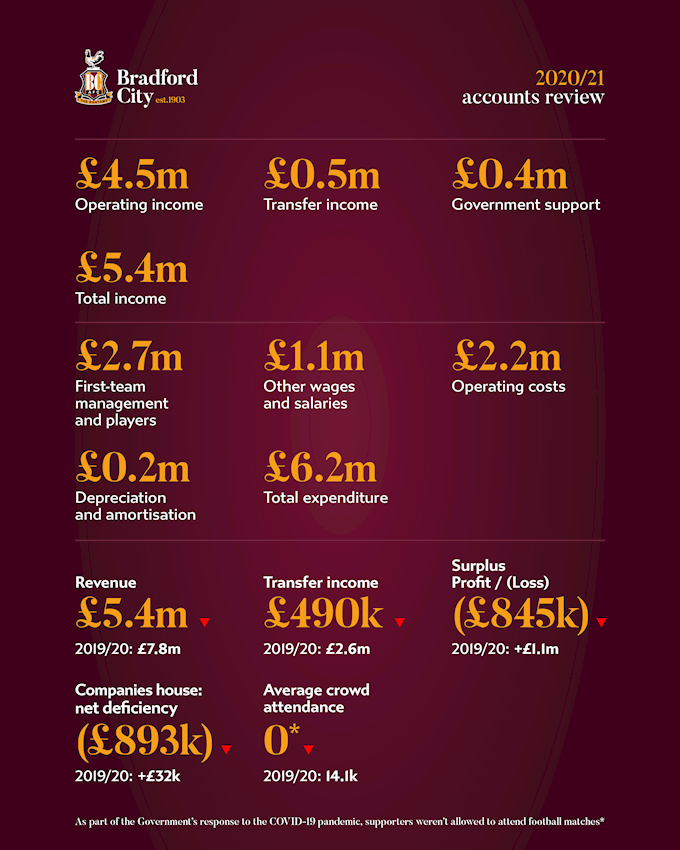 As is quite apparent from the graphic, the transfer income has diminished and, as was mentioned previously, without this contribution, the club has reported a substantial loss.

Consequently, as realised by many of the clubs at our level, football costs and - in particular - wages and salaries, have had to be constantly reviewed and will continue to be so, to ensure the club remains commercially viable.

During the year under review, there has been modest expenditure on the stadium and various fixed assets, although it is policy to improve assets wherever possible, within the available financial limitations.

The current liability position has deteriorated over the season due to the reasons already stated. Obviously, this position cannot continue and it is the intention of the club to take every opportunity to maximise commercial relationships and generate new and increased income streams. Trading losses, other than for carefully-considered investment for longer-term fiscal rewards, will be avoided in so far as we are able to control these destructive elements.

The net-asset position includes the cash balances of the club, which are significantly enhanced by the sale of season tickets and then gradually exhausted by the club’s normal financial activities.

This is quite common with football clubs, and it is a mark of our club as to how this is managed. Further funds are unfortunately often required, and this remains one of the major issues for clubs at all levels.

The pandemic has proven a difficult time for the football industry, and we have been fortunate to weather the storm to some extent, even though income streams have significantly diminished. In such times, imagination is a prerequisite and necessity proves to be the mother of invention. For example…

- Supporters have been greatly supportive by way of not claiming refunds on season tickets and hospitality packages.

- The club continues to explore other avenues to generate new income streams. iFollow, in particular, has proved very rewarding and presents a new area for potential growth.

- Naturally, and to the point of erudition, we continue to appraise costs to obtain maximum benefit for the club. As in the previous year, we have taken advantage of Government Support Schemes, tax deferrals and the Coronavirus Job Retention Scheme.

- Our commercial and community relationships continue to prosper, and we look optimistically to the future.

- The financial support of the EFL and footballing authorities, including the Premier League.

As referred to earlier, in the body of this analysis, we continue to adapt and review with constant forecasting, budgeting and problem assessing. The club has a policy of operating with budget deficits (base budgets). This assumes automatic elimination from all cup competitions, no player disinvestment considered, and attendances are based on historic commercial performances. This is a conservative strategy and allows surpluses to be measured for commercial decision making. Actual figures generally outperform ‘base budgets’.

When considering the future, it is very easy to express emotions of anticipation, passion and enthusiasm. We have a football club aiming to operate at a higher level in the EFL. To do this, we need to take advantage of every opportunity to build a good squad of players, improve our infrastructure and provide a platform from which to move on, year on year. Ultimately, we wish to provide the city of Bradford and our own supporters with an enterprise and asset of which everyone can be proud.