Bradford City AFC and Bradford City Community Foundation were yesterday proud to host the official opening of City Hub at the University of Bradford Stadium.

The all-new cafe and community facility, located on Valley Parade, will be open to the public on weekdays between 8.00am and 2.00pm, hosting community projects and provisions.

Located in the heart of the community, it will work to help vulnerable people across the district, with workshops offering opportunities to those less fortunate in Bradford, and a foodbank set to be introduced in 2023.

City players Matty Foulds, Ryan East and Scott Banks were present - alongside Councillor Martin Love, Lord Mayor of Bradford - for the launch of City Hub, which will also be open on home matchdays, welcoming supporters to soak up the pre-match atmosphere ahead of kick-off.

It has been opened as part of the EFL’s ‘Together – Supporting Communities’ project, supporting the communities and fans of the 72 league clubs during the cost-of-living crisis.

Bradford City Community Foundation chief executive officer, and former Bantams forward, Ian Ormondroyd, said: “City Hub is a fantastic facility which will be a space in the community for everyone to use.

“We are hoping supporters will come down to use the cafe and the facility as part of different groups who will benefit from what we are able to offer.

“A lot of the programmes we run are now completely different to the way they used to look. We have a packed schedule of activation but are also reaching out to the community to see how we can improve, so these are exciting times.

“We are constantly striving to expand our community programme and make it bigger and better, and City Hub is the next step for us in that sense.

“It will be open to the public through the week and on matchdays, so pop in for a coffee and you will be greeted with a warm welcome!”

You can now head down to City Hub, located on Valley Parade inside the old City Shop, between 8.00am and 2.00pm on weekdays and on home matchdays.

Bradford City AFC and Bradford City Community Foundation would like to take this opportunity to thank (pictured below, left to right) Chantelle Nassau, Sam McDonnell, Adam Thirsk and Lizzie Saunderson for their tireless efforts in making the opening of City Hub possible. 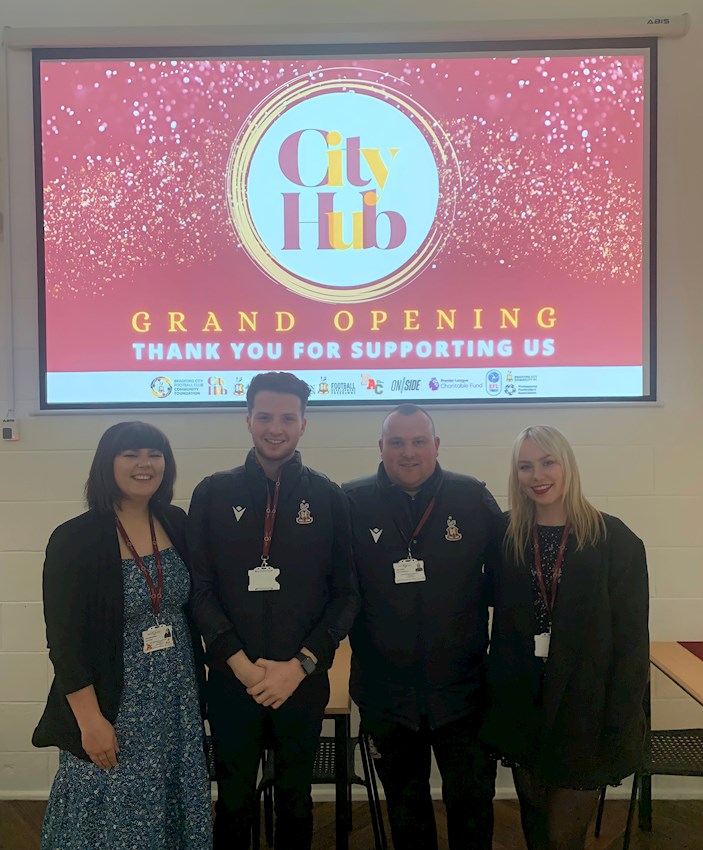