Mark Hughes’ Bantams opened 2023 victorious, with a thrilling 3-2 win over Salford City at the University of Bradford Stadium.

A first-half brace from Vadaine Oliver put City ahead at half-time, before substitute Abo Eisa's first goal in City colours clinched all three points at Valley Parade for the second time this week.

The visitors started the opening minutes on the front foot after being awarded an early corner.

Odin Bailey sent an inswinging cross into the danger area which looped back off the crossbar. The loose ball fell to Matt Smith who headed it towards Harry Lewis’ net, but he was well matched to the effort and managed to push the ball out for another corner, which City’s backline dealt with.

This time it was the Bantams' turn to attack, and in the eighth minute they were rewarded for their pressure with the game's opening goal.

Brad Halliday found himself in space and arrowed a ball into the area. Oliver rose highest to meet the cross, with his header taking a nick off Theo Vassell before looping over a stranded Tom King, and in for 1-0.

Immediately after going 1-0 down, Neil Wood’s men almost found a response. Romoney Crichlow lost his footing in City’s backline which allowed Bailey to capitalise on the loose ball and play through Smith. Salford’s front man successfully beat the offside trap and hit an effort towards Lewis, who saved brilliantly with his feet to ensure City retained their lead.

Salford continued to ask questions of City’s defence, however, and managed to find the equaliser in the 13th minute.

Richard Nartey was the first to a Salford cross and flicked on a header towards the back post. The ball found Conor McAleny who rifled a volley into the roof of the net.

As the first half progressed, Mark Hughes’ side - spurred on by over 17,000 Bantams in attendance - took the lead for the second time.

With 27 minutes on the clock, Tyreik Wright did well to beat his man to the byline and direct a low driven cross in.

Alex Gilliead latched onto the ball and poked it goalwards which King managed to push away. The loose ball was met by Oliver who had the simple task of tapping the ball into the net to ensure his name would be on the scoresheet.

Carrying the momentum from their second goal, City looked for a third before the end of the first half. Wright found himself free at the back post and struck a low effort towards King.

The Salford 'keeper did well to save and prevent the Bantams from extending their lead, as referee Neil Hair blew the whistle to ensure City headed into the break 2-1 to the good.

As the second half commenced, the Bantams continued to dominate possession as the search for their third goal intensified.

Just before the hour mark, pressure from Wright earned Hughes' men a corner. Richie Smallwood opted for a short set-play, exchanging a one-two with Harry Chapman.

Smallwood found himself in space which allowed him to drive inside before striking an effort towards goal. The ball fizzed towards King’s net but swerved onto the crossbar.

This time it was the Ammies' turn to react as they pressed forward and found an equaliser for the second time in the match.

Matty Platt was adjudged to have brought his man down on the edge of the box, resulting in a Salford free-kick. Elliot Watt stepped up to lay the set-piece off, which allowed Conor McAleny to hammer past Harry Lewis with the aid of a deflection.

With just over 20 minutes to be played, Hughes looked to his bench to try and unlock Salford’s defence for a third time. Abo Eisa came on in exchange for Levi Sutton and made an immediate impact with his first touch of the game.

City were awarded a free-kick on the right-hand side. Brad Halliday stepped up to take the set-piece, crossing the ball square into the box. The ball found fellow substitute Andy Cook who headed back across goal for Eisa to nod home his first goal for the club, as The Kop erupted.

The Bantams were not settling for just three goals, and went in search of their fourth to make sure of the points.

With 10 minutes of normal time to go, Walker exchanged a neat one-two with Tyreik Wright as City came forward with a flowing move. Wright played Walker cleverly in behind though his poked effort rolled agonisingly wide of the post.

As the fourth official indicated two minutes of stoppage time, the Ammies had one last roll of the dice.

Salford went on the attack and a pass into City’s penalty area caused the Bantams problems. The ball bounced in front of Lewis’ six yard box before deflecting off Matt Smith, towards goal and into Lewis’ hands, moments after Odin Bailey had struck the woodwork from a tight angle at the back post.

Neil Hair called full time on the contest as the Bantams claimed all three points, starting 2023 with a win and climbing to fifth in the table. 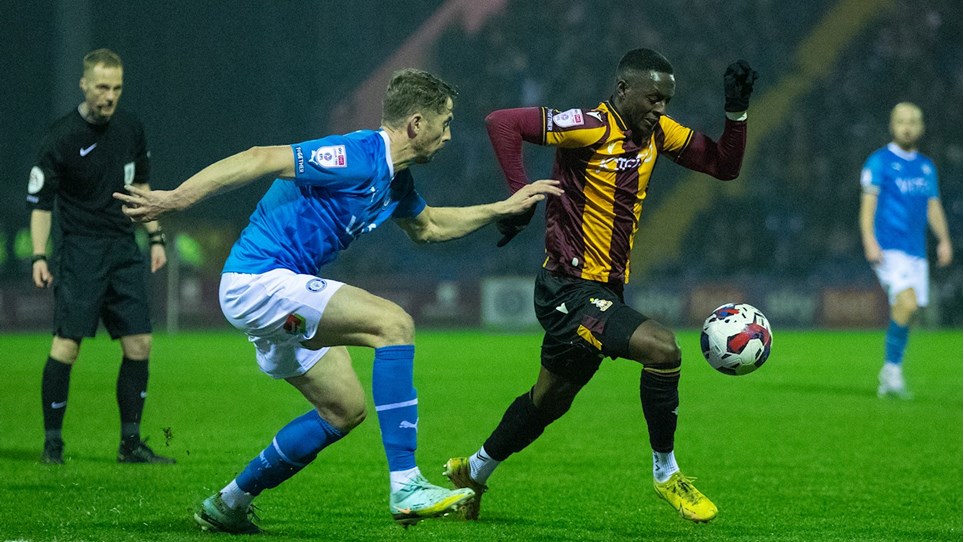 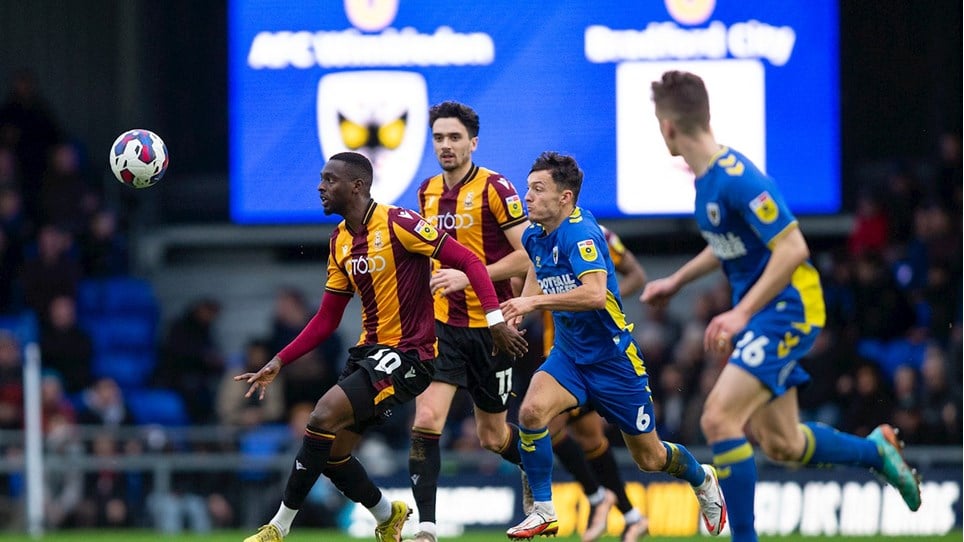 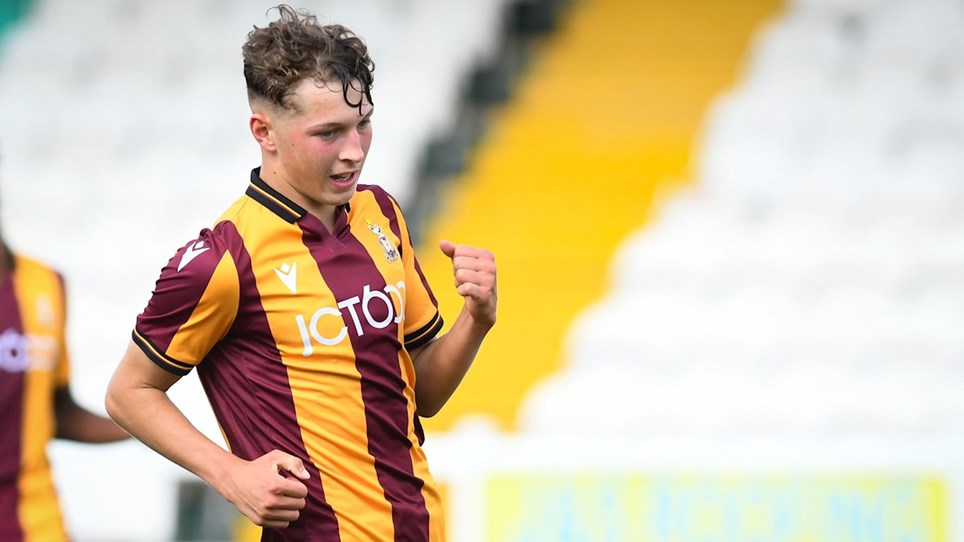 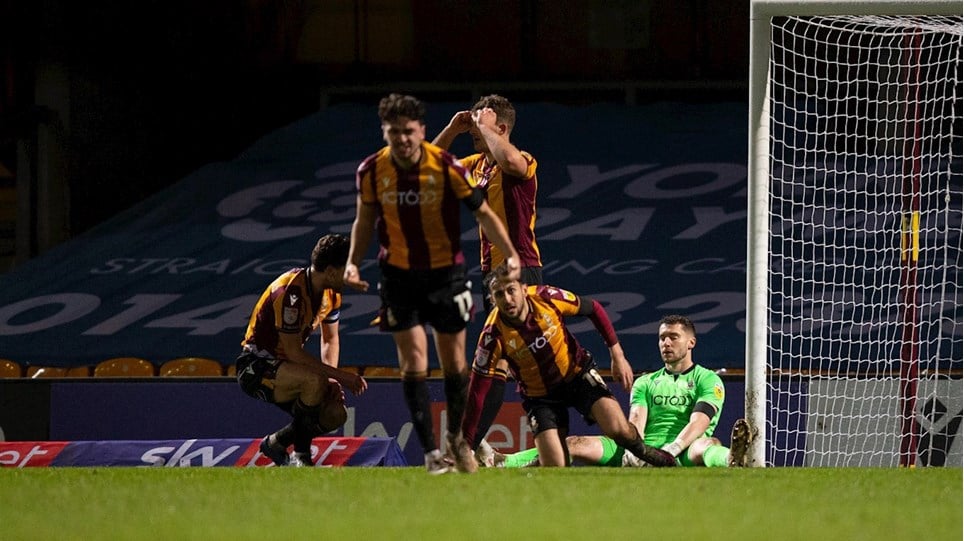