Simon Grayson's Bantams travel to Scunthorpe United this Saturday (5 May 2018) for their final fixture of this season's Sky Bet League One campaign.

Victory for Grayson's men at Glanford Park could see City finish as high as eighth in the final League One table of the 2017/2018 campaign.

Opponents Scunthorpe head into the contest with their place in the play-offs already secured following victory over Plymouth Argyle on Tuesday evening.

Scunthorpe United
With Scunthorpe's play-off semi-final first leg on the horizon next week, it remains to be seen whether interim manager Nick Daws will make any changes for this Saturday's game.

The likes of Tom Hopper, Neal Bishop, Cameron Burgess, Lee Novak and Cameron McGeehan could, in theory, be given run-outs ahead of Scunthorpe's play-off campaign.

Funso Ojo should be fit to be involved after picking up a slight knock.

Former Bantams duo Josh Morris and Rory McArdle are likely to be included in Scunthorpe's line up.

Callum Guy will also be missing for City's season-ending fixture due to a hamstring problem picked up during Tuesday's 1-1 draw with Walsall.

Matthew Kilgallon (calf) and Dominic Poleon (illness) both missed the Walsall fixture, with the duo aiming to be involved in some part of Saturday's trip to Scunthorpe.

After receiving some game-time against Walsall in midweek, Jordan Gibson and Cameron Hawkes are expected to remain in City's squad for match at Glanford Park.

Academy defender Reece Staunton, who made his senior debut at just 15 years-old in the Checkatrade Trophy earlier this season, is also likely to be included in the travelling party.

Stephen Warnock is set to feature on Saturday in what will be his final competitive fixture before retirement.

Kick Off
Supporters are politely reminded that this Saturday's game will kick off at 5:30PM.

Minute's Silence
There will be a minute's silence ahead of kick off on Saturday afternoon in respect to those Scunthorpe officials/supporters who have passed away over the course of this season. 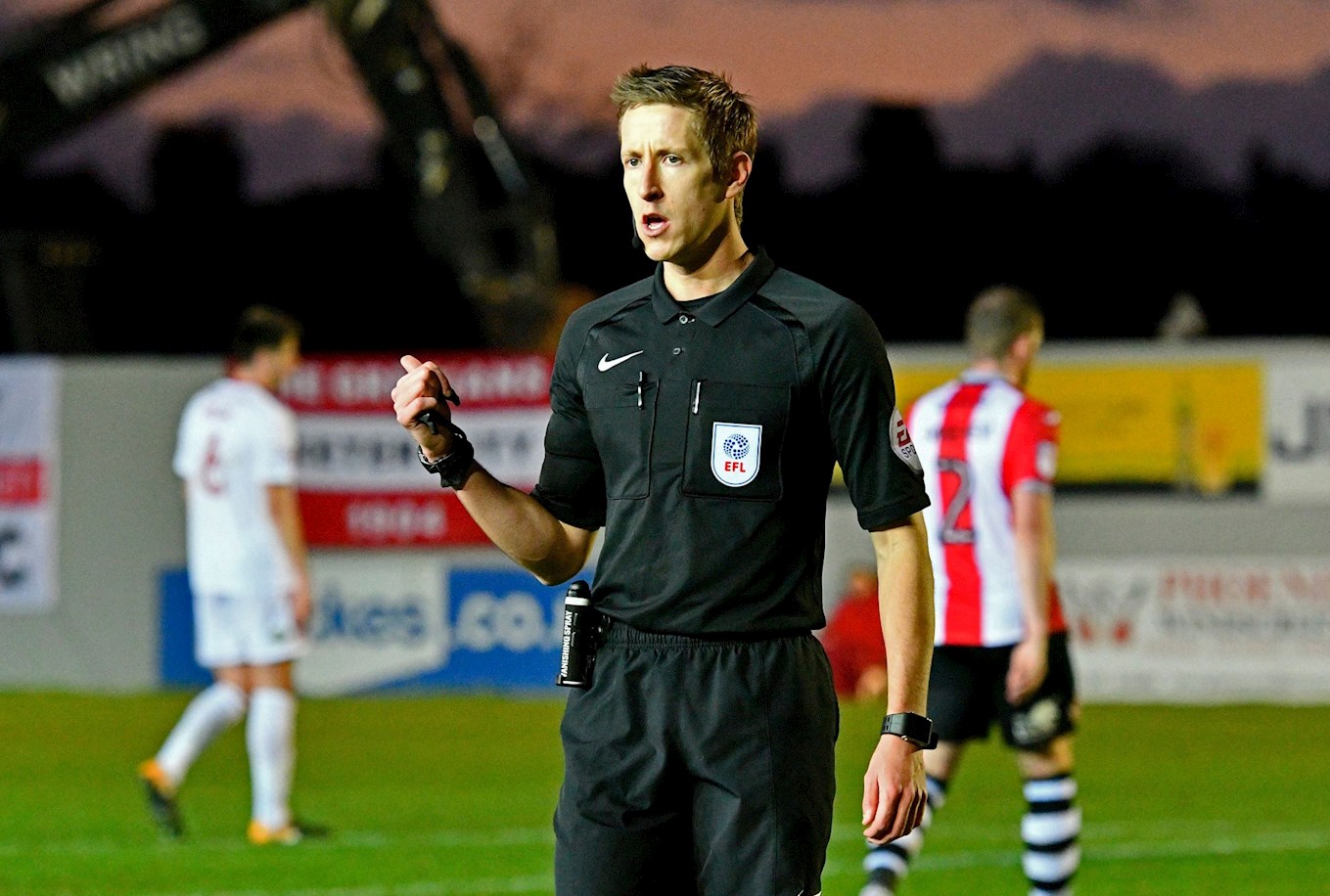 Match Officials
John Brooks will be in charge for this Saturday's fixture. Mr Brooks has taken charge of as many as 50 first team fixtures so far this season, including City's Emirates FA Cup tie at Yeovil Town back in January. The two assistant referees for the game at Scunthorpe are scheduled to be Steven Rushton and Wayne Grunnill. The fourth official at Glanford Park will be Joe Hull.

The FULL pre-match video interview with Grayson can be found on iFollow Bantams - HERE.

Tickets
Any tickets purchased after Monday (30 April) for our game against Scunthorpe United this Saturday will not be delivered to your address.

If you purchased your tickets after Monday, you can pick them up from the Ticket Office at The Northern Commercials Stadium before 4:00pm on Friday (4 May).

However, if you can’t get to the Ticket Office before then, you can pick them up from Scunthorpe United on Saturday before kick-off.

If you ordered before Monday night and haven’t received your tickets, or just want to check your tickets are in the office, please ring 01274 773355.

Prices for Saturday’s away game are;

Away Fans' Guide
Heading to Glanford Park this Saturday? Check out our guide to Scunthorpe's stadim and its surrounding areas - HERE.
Kit Colours
The Bantams will wear white shirts, white shorts and white socks at Glanford Park on Saturday. 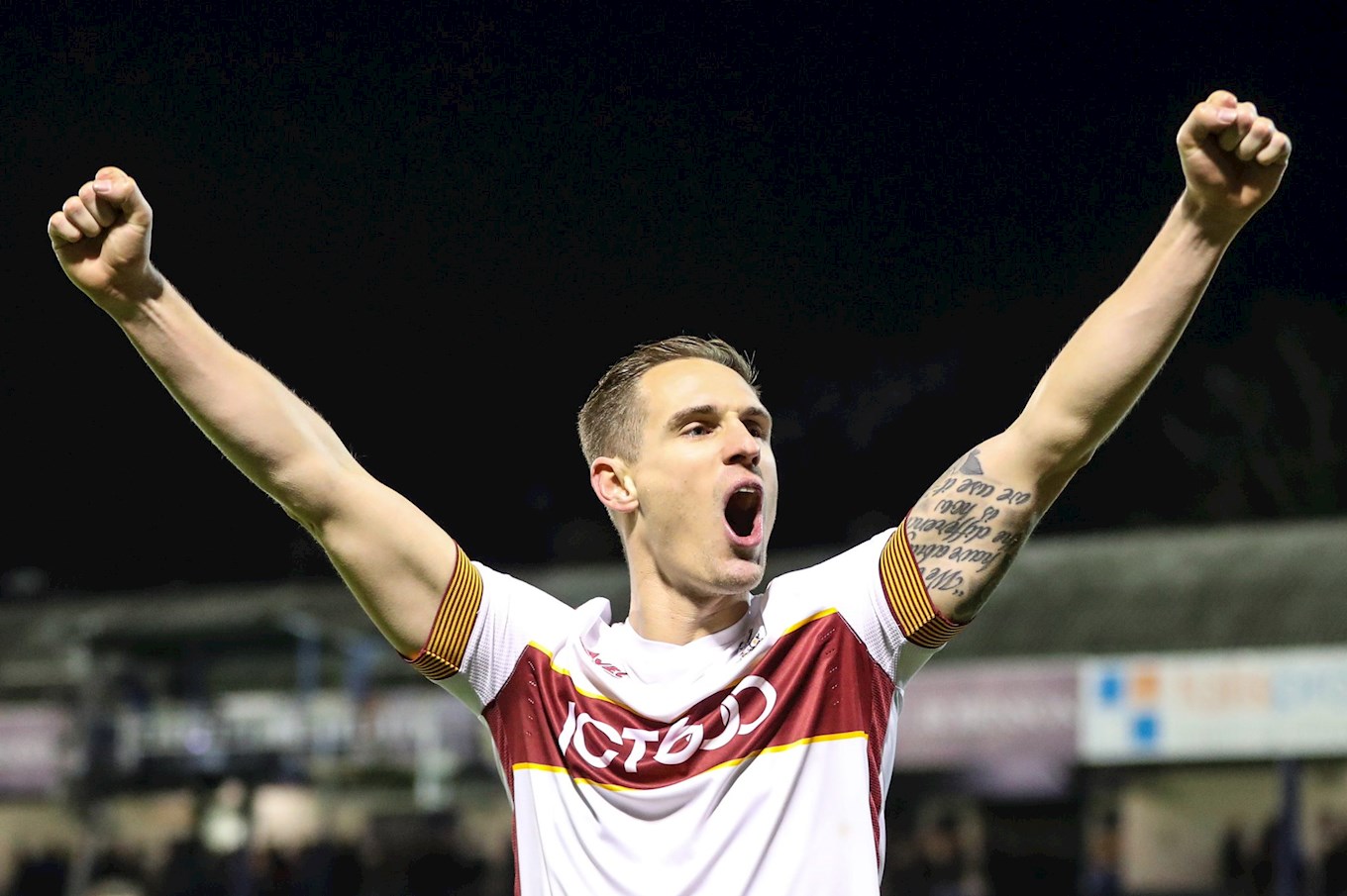 City are currently priced at 16/5 to defeat Scunthorpe at the Glanford Park.

The Bantams are also priced at 10/1 to beat Scunthorpe by a 1-0 scoreline.

Shay McCartan is available at 15/2 to opening the scoring, while Stephen Warnock can be backed at 16/1 to score at anytime during the game.

Full audio match commentary of the Scunthorpe match can be found via iFollow Bantams. Keep up to date with commentary from our media partners BBC Radio Leeds for match action and reaction from the game.

Simon Grayson's Bantams finished off their 2017/2018 campaign with a creditable performance and result against promotion-chasing Scunthorpe United.

Fresh from collecting his Player of the Year award earlier this week, Matthew Kilgallon headed City in front early after the break from a Tony McMahon corner.

Scunthorpe equalised soon after, however, when Conor Townsend converted from deep inside the box.

The game saw Stephen Warnock call time on his professional career with his final appearance before retirement.

Warnock was actually given the captain's armband for City's season finale at Glanford Park.

After missing Tuesday's home match with Walsall through injury, Kilgallon was fit enough to join Warnock in the Bantams' starting XI.

There was also a place in the team for young winger Jordan Gibson - his first starting appearance for City in League One.

Scunthorpe, who clinched their place in the Play Offs on Tuesday night, made five changes ahead of next week's semi-final first leg, but there was still places in the team for former Bantams duo Josh Morris and Rory McArdle.

Buoyed by their recent success in midweek, Scunthorpe started the game with purpose.

Cameron McGeehan warmed the hands of Colin Doyle with an early shot, although Gibson was quick to test Gilks at the other end with a strike soon after.

The Iron nearly took the lead fifteen minutes in when Morris took aim with a free-kick from outside the box and proceeded to crash a curling effort against Doyle's crossbar.

After a relatively slow start to the match, City seemed to have more of a say in the contest - certainly from an attacking sense - as the opening half progressed.

Shay McCartan tested Gilks with a low shot on the turn from outside the box, while Gibson fired wide from inside the area minutes later.

Although genuine clear scoring chances remained limited for the rest of the half, Grayson's men continued to hold their own against their hosts as the game moved into the break.

The Bantams seemed to up the tempo after the interval, enjoying good spells of possession in the early stage of the second half.

Scunthorpe could have actually caught City out on the counter-attack, though, but Hakeeb Adelakun's low drive was held by Doyle after the winger had been found by Novak.

City were rewarded for their bright play when they took the lead just over ten minutes after the restart; Kilgallon rising highest to connect with a McMahon corner delivery and head into the corner past a rooted Gilks.

The goal capped off a fine personal week for Kilgallon after the defender had collected seven trophies at the Club's Player of the Year awards on Wednesday night.

Sadly for City, however, they could only hold onto the lead for just four minutes.

Alex Gilliead tried to get back in position to cut-out a Neal Bishop pass, but Townsend was still able to latch onto the ball and finish past Doyle from close range.

Although the game naturally had an end-of-season feel to it at times, there was no denying City were giving it a good go in the second period despite Townsend's equaliser.

Gibson fired narrowly wide of the far post after a neat piece of skill had given him some shooting space outside the box.

The winger, who showed flashes in the May sunshine of what he is capable of, was replaced fifteen minutes from the end by another player to enjoy a breakthrough year this campaign, Omari Patrick.

Just under ten minutes from the end, City came agonisingly close to finding the winner that their second half showing probably deserved.

Wyke let rip with a stunning half-volley strike from the edge of the area that rattled against the underside of the bar with Gilks seemingly beaten.

McCartan tried to latch onto the rebound for a close range finish as the ball bounced loose but Gilks narrowly beat him to it.

Warnock then tried to look for the dream goal on his final outing minutes later but his fierce cross-come-shot from the left fizzed over.

That shot for the left back would prove to be his last meaningful action in professional football, with the defender replaced soon after by 16 year-old apprentice Reece Staunton.

The whole of Glanford Park, including the home supporters, gave Warnock a tremendous ovation as he left the pitch.

The defender was also congratulated by players from both sides following a fantastic playing career.

It was an emotional and fitting ending for a player who started and ended it all with the Bantams after over 540 appearances in the game, several seasons in the Premier League and two England caps.

For his replacement Staunton, it was the youngster's first ever involvement in a league game; the left-sided defender had earlier become City's youngest ever appearance-maker in the Checkatrade Trophy back in November.

As City's attentions began to turn to the summer and next season, and Scunthorpe's thoughts naturally drift to the play-offs, the game almost inevitably headed towards a draw.

The Bantams did have one final chance when Levi Sutton sliced over his own bar from a Patrick cross in injury time, but Matthew Lund's shot in the box from the resulting corner was blocked.