David Hopkin's Bantams were frustratingly forced to settle for a share of the spoils following a goalless draw with Plymouth Argyle at the Northern Commercials Stadium.

Ball, who had earlier hit the post with an effort at the start of the second period, nearly won it for City in injury time but the attacker was denied via a great block from Niall Canavan.

Although the extra point on the board and a clean sheet will be welcomed by the City boss, Hopkin and his players will undoubtedly be left thinking of what might have been after nearly breaking the deadlock on more than one occasion after the interval.

Coming into this match, Plymouth had lost only once in their previous eight matches - winning five of them - but Derek Adams' side were left hanging on for a point in the end as Hopkin's men kept pushing and pushing for a winner until the final seconds.

Before City's spells of pressure after the break, Plymouth did edge proceedings in the first period.

Freddie Ladapo had an early goal correctly ruled offside, while the talented Graham Carey struck the post with a drive shortly before half time.

Going into this encounter, Hopkin made two changes to his starting XI.

Billy Clarke was handed his first start since returning to the club on January transfer deadline day.

Hopkin's other alteration to the team that began against Fleetwood Town last weekend saw Doyle replace George Miller in attack.

Clearly aware of the potential importance of this match, City - who were attacking the T L Dallas Stand end first up - began the fixture on the front-foot.

Adam Chicksen headed wide from an early chance following Doyle's cross into the box from the left.

At the other end, Plymouth had the ball in the net in the fourth minute, but Ladapo was rightly flagged offside after converting from close range following David Fox's drive into the box.

After City's intense early start, though, the contest began to settle into more of an even affair. 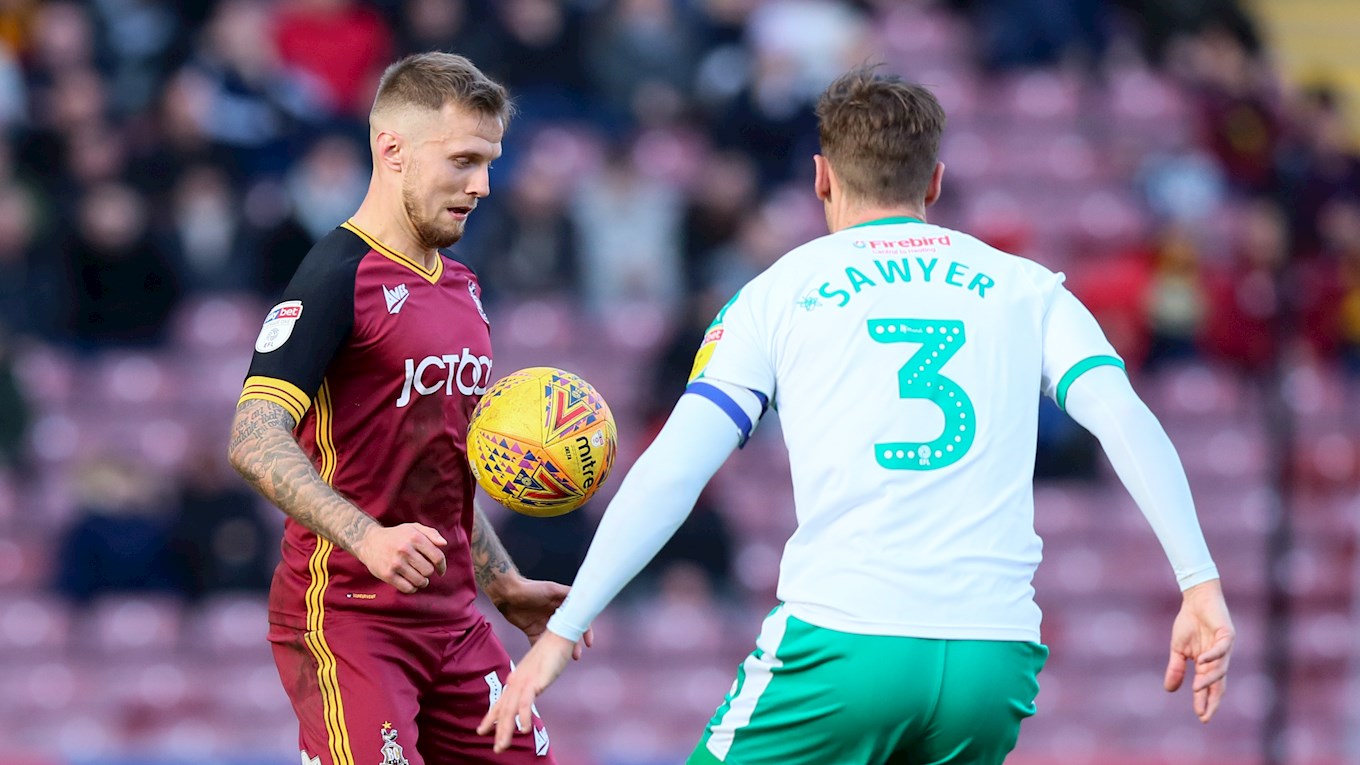 Jack Payne and Antoni Sarcevic both fired over with strikes for City and Plymouth respectively within a few minutes of each other midway into the first period.

Sarcevic had another effort for goal shortly afterwards as City failed to clear a corner, but Richard O'Donnell held the midfielder's low drive in the box.

The former Fleetwood man was involved again in Plymouth's next meaningful venture forward, but the attack came to nothing as Carey scuffed a shot through to O'Donnell following Sarcevic's cross to the edge of the area.

As time ticked towards the half time break, Plymouth enjoyed their best spell in the whole match; controlling proceedings in the final minutes before the interval.

Plymouth went close to opening the scoring three minutes before half time when Carey took aim from around the edge of the box.

Carey's low drive seemed to take a touch off the gloves of O'Donnell before hitting the base of the 'keeper's near post.

A lurking Ladapo tried to pounce for a close range tap-in, but Anthony O'Connor was on hand to clear.

Given their strong finish to the first period, Plymouth will have been confident of starting strongly after the break.

To the credit of City, however, it was Hopkin's men who began the second period on top.

Ball fired over on the half-volley from an angle four minutes into the half after a long kick forward from O'Donnell had bounced into the Plymouth box.

City's number forty then went even closer, as the Bantams came within inches of finding an opener.

With City clearly enjoying a purple patch at this stage, the Bantams threatened once more through Paul Caddis just before the hour mark.

Caddis took a touch before firing for goal but his low angled drive was pushed away by Letheren.

Plymouth made two changes as the half progressed - bringing on Oscar Threlkeld and striker Ryan Taylor - in an attempt to change their fortunes in the match.

The Bantams still looked the more likely scorers, however, with Lewis O'Brien firing wide with a low strike from just outside the box as Plymouth cleared a Payne corner fifteen minutes from the end.

As the match moved into the final ten minutes or normal time, Plymouth enjoyed a rare sight of O'Donnell's goal when Threlkeld's cross deflected into the path of Sarcevic via Nathaniel Knight-Percival, but the Pilgrims midfielder sliced his effort wide.

City responded to that near miss by coming within a whisker of taking the lead; only being denied by a fantastic save by Letheren.

Caddis' cross from the right found Doyle in the middle.

The Irishman's header looked to be finding the far corner, but Letheren leapt up to superbly claw the effort away.

That chance sparked a late push from the Bantams, with substitute Hope Akpan then firing over from a good position in the box minutes later after being found in space by Caddis.

Another City sub - Anderson - was the next to trouble Plymouth soon after.

The midfielder, who was making his second City appearance off the bench, flicked for goal from close range following Doyle's near post cross into the six yard box but the effort was deflected behind by Letheren.

As three minutes were signalled for the injury time period in the game, there was still one last chance for the Bantams to win it.

O'Brien's brilliant ball over the top from deep put Ball in behind the Plymouth defence.

With only Letheren to beat, Ball looked to square for sub George Miller to tap in but City were dramatically denied a late winner when Canavan swooped in to make a vital clearance.

Match line ups, stats and updates from the Plymouth game can be found via the Match Centre - HERE.