At this stage David Hopkin's side looked in complete control, but Walsall managed to find an equaliser just before the break through Josh Gordon.

Walsall then shocked City by taking the lead minutes after the restart; Joe Edwards netting after Matt Jarvis had headed against the crossbar.

To their credit, City responded soon after, though, to level things up thanks to Anthony O'Connor's close range finish.

City looked the most likely winners at this stage, with Lewis O'Brien hitting the post and Jack Payne having a close range effort blocked on the line shortly after O'Connor's leveller.

Walsall stunned Hopkin's men once again, however, when Gordon headed home from a Luke Leahy corner just past the hour mark.

With Walsall fighting like tigers to hang onto the lead after getting their noses in front again, the vast majority of the play in the remainder of the match came in the hosts' half.

Billy Clarke was denied by a great save from Liam Roberts midway through the half, while Doyle somehow saw a close range shot blocked on the line eight minutes from the end.

As City poured forward time after time, Payne then had a free strike inside the box well repelled by Roberts just two minutes later.

Ball was denied by Roberts as well soon after, and then Payne had another shot blocked from deep inside the box.

Adam Chicksen had one last chance for City in final minute of normal time, but his angled drive flashed just past the far post via a touch off Jon Guthrie.

The Bantams also kept with virtually the same bench as the Plymouth fixture, although Daniel Devine - the club's only outfield 'club developed' player missed out through injury, meaning City could only name six substitutes.

Following good work from Ball, the first opening of the afternoon came three minutes in when Clarke got into space on the left hand side of Walsall's penalty area.

Clarke played the ball across the box, but Ball and Doyle both couldn't quite get a clean shot in and the chance was gone.

The Bantams were handed a major boost in the match shortly afterwards when Cook was adjudged to have elbowed Nathaniel Knight-Percival in the face as the pair tangled for an aerial ball in City's half of the pitch.

Payne got into space on the right channel of Walsall's penalty area following some neat footwork from City's number ten.

The attacker floated a lovely ball into the middle and Doyle was on hand to head home into the bottom corner by Roberts' near post.

One-man down, Walsall were now limited to simply sitting in, getting players behind the ball, and trying to restrict City's chances of doubling their lead and arguably putting the match to bed.

As you would expect, City were dominating possession at this stage and looking to pull Walsall's entrenched players out of position to create an opening.

A neat ball into the box from Paul Caddis was flicked on by Clarke, but Doyle's volley for goal hit the body of Nicky Devlin.

Caddis was involved again just before the half hour point when a Jacob Butterfield flighted corner delivery dropped into his path inside the area.

The Scot drove for goal from an angle but the effort was blocked away by Dan Scarr.

Despite the game looking to be heading away from them, Walsall did manage some efforts for goal as City failed to finish off their opponents.

Gordon had a strike for goal blocked by O'Connor following Jarvis' cross into the middle.

Although Walsall were showing plenty of bravery and endeavour, City still looked comfortable as time ticked towards the interval.

The story of the match was changed three minutes before the break, however, when Edwards put the ball into the middle from the right.

City failed to clear their lines - with Knight-Percival possibly fouled as he tried to hook away - and Gordon pounced to fire home.

Doyle nearly restored City's lead in first half injury time, but the Irishman headed narrowly wide of the near post via a Chicksen cross.

The Bantams will have headed into the second period looking to right a few wrongs after letting that lead slip up, but Walsall turned the game completely on its head less than two minutes after the interval as they incredibly struck again.

Jarvis crashed a header against the bar following Zeli Ismail's cross into the box from the right.

Edwards was first onto the loose ball and the Walsall skipper swooped to head home into the far bottom corner.

The goal was clearly a sizable blow for City, but Hopkin's side responded in the right manner just six minutes later.

A short corner from the Bantams gave O'Brien shooting space just inside the box.

O'Brien's drive for goal was parried by Roberts but O'Connor was on hand to tap the loose ball into the net. 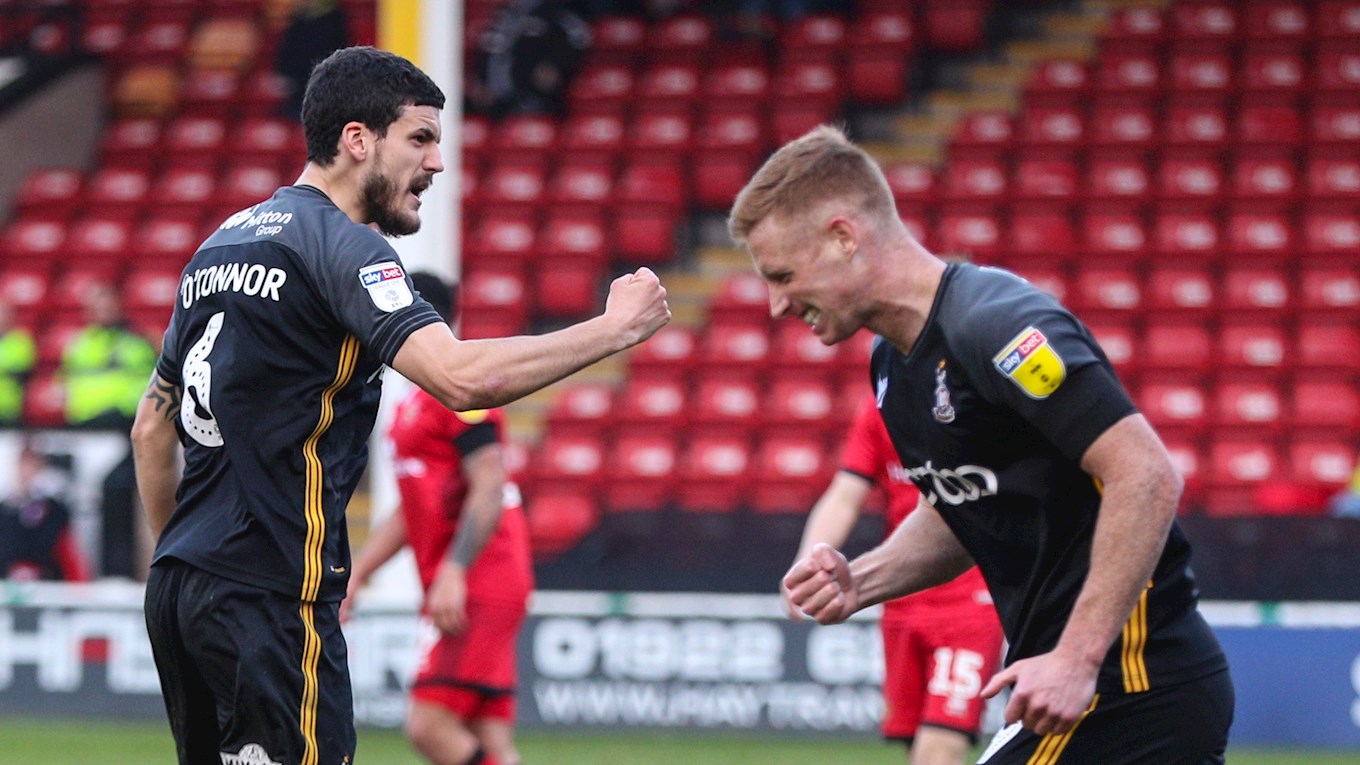 With over half an hour of normal time left and City's tails back up once again, Hopkin's men looked clear favourites to go on and claim the three points.

In fairness to the Bantams, they did everything they could to get back in front.

Soon after O'Connor's equaliser, O'Brien saw a strike from just outside the box crash against the inside of Roberts' far post.

Just three minutes later Roberts was unable to cling onto a Clarke cross from the left and Payne looked set to fire home.

Payne fired in the rebound from close range - but the Huddersfield Town loanee was denied a certain goal when the effort was blocked on the line by Guthrie.

Given the flow of the match then, it was another shock moment for the Bantams when Walsall amazingly retook the lead once again.

Leahy's delivery into middle from a corner was met by Gordon and the striker out-jumped O'Donnell to head into the far corner.

Walsall had given a lung-bursting effort to get to this stage, but the hosts still probably couldn't believe their luck as they now looked to hang on for an unlikely victory.

Understandably given the scoreline, Walsall sat in for the remainder of the match in an attempt to drag themselves over the line.

Clarke had an effort from just outside the box midway through the half superbly tipped around the post via a good finger-tip save from Roberts.

The Irish attacker was replaced soon after by Jermaine Anderson as Hopkin looked to push the midfielder's physical presence further up the pitch.

Going into the final ten minutes or so of normal time, Walsall's players looked to be visibly tiring, but they were still just about getting the blocks and tackles in when and where they could.

Walsall did have one opening on the break when Edwards fed Jarvis into space in the box, but last defender O'Connor produced a great last-ditch tackle to deny the one-cap England international.

At the other end, City couldn't believe they didn't net for a third time in the afternoon with eight minutes of normal time to go.

Caddis' ball into the box from the right was headed across goal by Anderson towards Doyle.

Doyle looked set to volley home from just yards out but Guthrie managed to get a brilliant block in from right in front of goal.

Payne was the next Bantam to be frustrated soon after when a Chicksen cross from the left found him unmarked in the box.

Payne fired for goal on his favoured left foot but Roberts produced another smart save to push it away.

Ball then had a strike himself repelled by Roberts from City's next attack just seconds later. 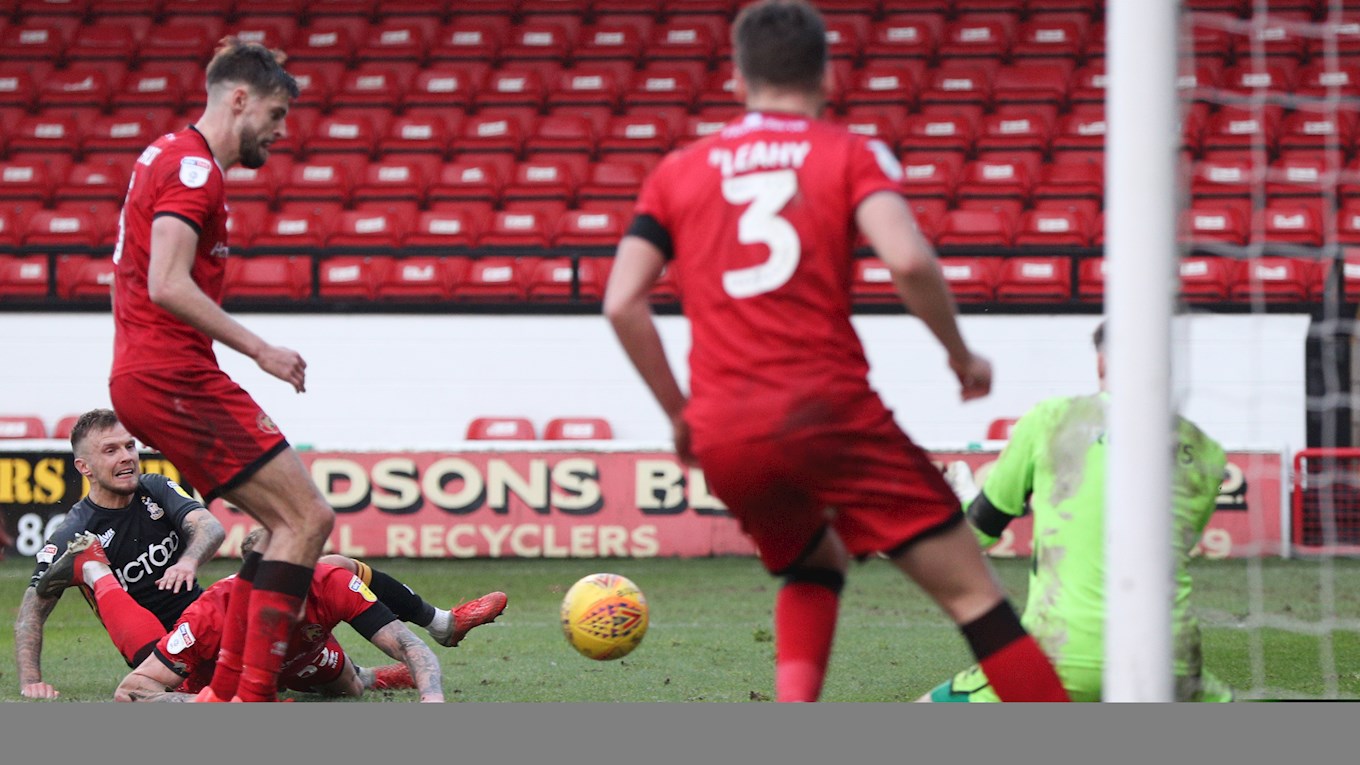 Kelvin Mellor and George Miller were introduced shortly afterwards as City used every option available to them to get back into the game.

With Walsall's goal continuing to live a charmed life, Payne then had a close range effort blocked by Scarr as the attacker bursted dangerously deep into the box.

The wave of attacks kept going, but Walsall were somehow hanging on despite City's numerous efforts on goal and the home players' tiring limbs.

Chicksen had an effort for goal from an angle just inside the box on ninety minutes, but his right-footed strike flicked off Guthrie and narrowly past the post.

Four minutes of injury time were signalled after that, giving City one last chance.

There was a final opening for the Bantams in the dying seconds when Butterfield flighted a free-kick towards the far post.

Knight-Percival got his header on the delivery but the effort sailed over.

Match line ups, stats and updates from the Walsall fixture can be found via the Match Centre - HERE.