The 5-0 loss at Bloomfield Road on Saturday will have dented the pride of City's players, and Grayson will be demanding a positive response from his group when Shrewsbury arrive at Valley Parade.

Opponents Shrewsbury come into Thursday's televised game currently sitting third in the Sky Bet League One table, with only promotion favourites Blackburn Rovers and Wigan Athletic above them in the league.

Under the leadership of Paul Hurst, Shrewsbury have already produced a memorable campaign of massive over-achievement compared to their efforts of last season.

After narrowly avoiding relegation at the end of the 2016/2017 campaign, the Shrews have now amassed an incredible 81 points so far this time around and already claimed at least a play-off spot.

Despite those impressive figures, though, Hurst's men have only collected one point from their last two away games - both coming against relegation-threatened duo Northampton Town and Rochdale.

Shrewsbury also lost out to League Two side Lincoln City at Wembley Stadium in the Checkatrade Trophy Final last Sunday.

Thursday's match for the Bantams will be their first at home since their hard-fought success over Gillingham last month.

A repeat of that result, and the lung-bursting efforts shown on the day, would certainly be welcomed by Grayson and his staff.

With the live television cameras in town, the Shrewsbury's fixture will also be City's third league match to be shown on Sky Sports in less than four weeks.

Bradford City
Matthew Lund could be back in contention for the Bantams after recovering from a hamstring injury.

Romain Vincelot is battling to prove his fitness after suffering a nasty cut on his knee during last Saturday's defeat at Blackpool.

Sadly, Vincelot isn't the only squad member nursing a knock from the Blackpool fixture, with a couple of players expected to need pre-match fitness tests ahead of Thursday's game.

Jake Reeves (groin) and Ryan McGowan (knee) continue on their road to recovery, while Alex Jones is hoping to make progress from a troublesome ankle problem.

Shrewsbury Town
Former Bantams defender Luke Hendrie could come back into the side for the visitors after being cup-tied for last Sunday's Checkatrade Trophy Final.

Aristote Nsiala is likely to be included in Shrewsbury's back four after playing at Wembley in a mask to protect a fractured cheekbone he picked up at Rochdale nearly two weeks ago.

Shrews midfielder Abu Ogogo will miss out, however, after injuring his knee in training recently.

Defender Junior Brown has been sidelined for most of this season with a knee injury and is expected to miss the rest of the campaign.

Match Officials
This Thursday's televised encounter will be officiated by David Webb. The referee has already taken charge of thirty-eight matches so far this season, mainly in Sky Bet League One. Three of those matches this campaign have involved the Bantams - the away matches at Bury and Wigan Athletic, plus the home game with Bristol Rovers. The two assistant referees at the Northern Commercials Stadium on Thursday will be Graeme Fyvie and Neil Sharp. The fourth official is scheduled to be Michael Salisbury. 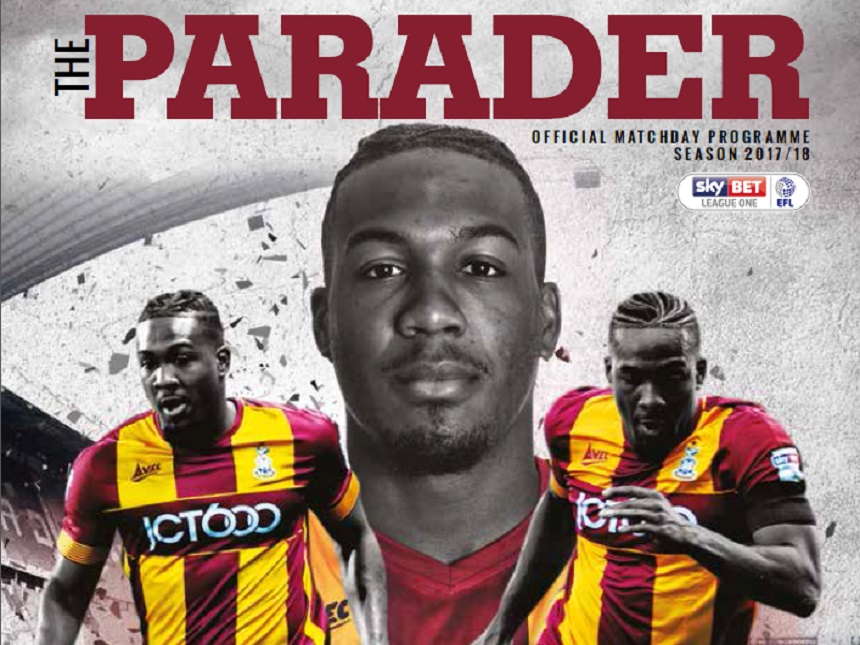 The Parader
Thursday's cover-star for the Shrewsbury Town edition of 'The Parader' will be Dominic Poleon. The striker gives an in-depth interview to the match-day magazine, while he also answers a selection of fans' questions sent in via social media. Also included in the programme, Adam Chicksen speaks about his recent time away on international duty with Zimbabwe and Romain Vincelot gives his honest assessment after the Blackpool defeat.

Supporters can watch a section of the interview below:

The FULL pre-match video interview with Grayson can be found via iFollow Bantams - HERE.

City are currently priced at 12/5 to defeat Shrewsbury at the Northern Commercials Stadium.

Tyrell Robinson is available at 12/1 to opening the scoring, while Kai Bruenker can be backed at 5/2 to score at anytime during the game.

UK-based fans who cannot get to Valley Parade can listen to our live audio commentary, with BBC Radio Leeds' Tim Steere and former City defender Wayne Jacobs on hand to provide analysis of the game.

There is also access to exclusive video content, such as pre and post-match press interviews and extended highlights.

A monthly pass costs just £4.49 and lasts for 30 days from the date of purchase.

Overseas supporters will unfortunately not be able to watch this game live, however, as it has been selected for live TV coverage.

If you are experiencing any problems with iFollow, please email iFollow@efl.com or use the chat button (Speech bubble icon) in the bottom right corner of our home page.

The Bantams responded excellently to last weekend's dismal defeat at Blackpool to earn a respectable point against promotion-chasing Shrewsbury Town in front of the Sky cameras. Alex Gilliead and Stephen Warnock went close in a first half that kept Town stopper Dean Henderson quite busy and Paul Hurst's side were reduced to ten men after an hour with Omark Beckles sent off for a second bookable offence. Despite the man advantage, Simon Grayson's side couldn't find a winner with the visitors showing equal intent to win the game.

Timothee Dieng came back into the team to put in a commendable performance in the middle of the park and he went close early on for the Bantams, heading just past the post from a Tony McMahon corner delivery. Seconds later, Colin Doyle had to be alert to push away a firm drive from the lively Alex Rodman.

The next opportunity came Alex Gilliead's way and it was a very presentable one. Stephen Warnock's deep cross to far post was kept alive by Charlie Wyke who headed the ball down into the centre and the City winger saw a shot on the bounce tipped over expertly by Town's Manchester United loanee stopper Dean Henderson.

Seconds later, Warnock himself had a shot from 20 yards on his weaker right foot pushed around the post by Henderson and McMahon's free kick had the opposing goalkeeper at full stretch but unfortunately for the Bantams the ball went agonisingly wide of the post.

Kai Bruenker was a real handful on his first start for the club since his January move from SC Freiburg and as he looked to burst into the area and potentially bear down on goal, he was tripped by Omar Beckles who recieved his first of what would ultimately be two yellow cards on a frustrating evening for him.

Rodman continued to look a threat on the left-hand side of midfield and saw a shot from a decent position fly harmlessly wide and over the bar into the Kop and then on the opposite flank, Shaun Whalley who himself was one of Town's best players, saw a low drive whilst just past Colin Doyle's post.

With time running out before the half-time interval, Town had their best chance of the half. James Bolton picked out the run with a superb raking pass into the City area and it was controlled by Jon Nolan who saw a shot go under the legs of Doyle but the Irish stopper got enough contact on the ball to stop it from squiriming over the line.

Shrewsbury started the second half on the front foot and Rodman saw a stunning strike from distance whistle just over the bar to let the Bantams off the hook - it wouldv'e been an impressive way to break the deadlock.

The game sparked into frantic action just before the hour with Doyle superbly keeping out Nolan once again before Gilliead was denied a goal by some excellent defending from Aristote Nsiala.

On the hour mark, Beckles was given his marching orders after losing control of the ball and stepping on the toes of Nathaniel Knight-Percival. The referee, David Webb was left with no choice but to send the defender off and the Shrews were left to play out the remainder of the game with ten men.

With a quarter of an hour remaining, Charlie Wyke spurned a great opportunity for the Bantams. Afforded too much time to deliver a cross from the right-hand side, McMahon's delivery found the Bantams forward and his header went marginally wide of the post.

The two teams certainly went toe to toe in an entertaining encounter but both defences were on top of their games to keep clean sheets. Bolton and Wyke both had late chances for their respective teams but it wasn't to be a win for either team with both having to settle for a hard fought goalless draw.