After a busy week on and off the pitch, Stuart McCall's Bantams will be looking to get back to winning ways when they entertain AFC Wimbledon this Saturday (27 January 2018).

Following back-to-back away matches at Bristol Rovers and Rotherham United in recent days, McCall's men welcome AFC Wimbledon at the Northern Commercials Stadium having added as many as four new members to their squad in the last 48 hours.

Both Wimbledon and City met just before Christmas in the first fixture between the two sides this season at the Cherry Red Records Stadium.

Wimbledon came out 2-1 victors that day but McCall's men will feel they deserved a share of the spoils after hitting the woodwork three times.

The Dons have only lost once in the five league games since their December meeting with McCall's side, a run that has moved them out of the League One relegation zone.

Bradford City
The Bantams could have as many as four new members added to their match-day group following recent moves in the transfer market.

Stephen Warnock and Matthew Lund, both of whom signed on loan from Burton Albion on Friday, are expected to be involved.

German striker Kai Bruenker and Australian defender Ryan McGowan are both waiting on international clearance to see if they can make up part of City's squad for the Wimbledon game.

Tyrell Robinson is ruled out after damaging his hamstring during Tuesday's game at Rotherham United.

Robinson's absence could mean a return to the starting XI for Adam Chicksen.

McCall must decide whether to put the left back in from the start against Wimbledon after missing the last three months through injury.

Colin Doyle is another player edging ever closer to a recall following his own period on the sidelines.

Doyle suffered a serious knee injury back in November but he has recently returned to full training.

AFC Wimbledon
Dons duo Dean Parrett and Will Nightingale are both expected to miss out on the trip to the Northern Commercials Stadium due to injury.

Wimbledon boss Neal Ardley could be expected to stick with the same starting XI that begun last Saturday's home win over Blackpool.

Striker Joe Pigott and defender Jon Meades - two players who impressed off the bench against Blackpool - are possible options for Ardley, however, should he wish to change things up slightly.

Minute's applause
Following the recent passing of former club secretary Jim Mellor, Cyrille Regis, ex-Barnsley chairman Patrick Cryne and legendary player and broadcaster Jimmy Armfield, there will be a minute's applause ahead of kick off on Saturday to honour all four. 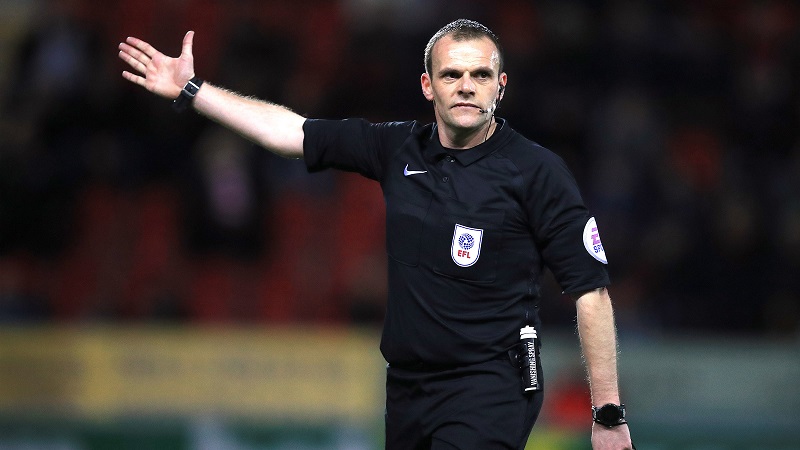 Match Officials
The referee for this Saturday's fixture will be Geoff Eltringham. He has officiated twenty games so far this season, mainly in the Championship. The Wimbledon match will be Mr Eltringham's first game involving City in over two years. The County Durham referee last took charge of a City match in January 2016, when the Bantams faced Bury in an Emirates FA Cup third round reply. The two assistant referees for this Saturday will be James Mainwaring and David Avent. The fourth official is scheduled to be Joe Hull.

Interview
Stuart McCall's pre-match video preview ahead of this Saturday.

Stuart McCall's side are currently priced at 13/10 to defeat AFC Wimbledon at the Northern Commercials Stadium.

The Bantams are also priced at 9/1 to beat AFC Wimbledon by a 2-0 scoreline.

Matthew Lund is available at 11/1 to opening the scoring, while Kai Bruenker can be backed at 15/8 to score at anytime during the game.

Coverage
For those unable to get to the Northern Commercials Stadium on Saturday, City supporters can follow live updates from the AFC Wimbledon game via the club's official website, plus Facebook and Twitter pages.

Full audio match commentary of the AFC Wimbledon match can be found via iFollow Bantams. Keep up to date with BBC Radio Leeds' Tim Steere for match action and reaction from the game.

The Bantams slipped to a heavy home defeat at the hands of AFC Wimbledon with three second half goals ensuring victory for the Londoners. In slightly controversial circumstances, Jimmy Abdou gave the visitors the lead and early in the second half Dominic Poleon had an equaliser chalked off for a very late offside decision. Andy Barcham doubled the Dons' lead just before the hour and a Cody McDonald brace completed the scoring.

City started the game reasonably well and former AFC Wimbledon man Dominic Poleon forced George Long into a comfortable save and against the run of play somewhat, the visitors took the lead shortly afterwards.

In fairness to Lyle Taylor he showed determination to try and keep the ball in play and create an opportunity but although on first viewing it looked as if the ball had gone out of play, play continued and Jimmy Abdou recieved a pass before curling a low shot into the bottom corner past Rouven Sattelmaier just before the quarter-hour mark.

The first half was very evenly contested and the Bantams came a matter of inches from levelling things up midway through. Callum Guy grew into the game at right-back to put in a decent display and after delivering a dangerous cross from the right-hand side, Dominic Poleon was close to connecting with the ball at the far post with an attempted diving header.

Poleon was involved in another moment of controversy early in the second half, the first of course being the Abdou goal. Paul Taylor fizzed a dangerous cross-shot towards goal and Matthew Kilgallon's touch helped the ball into the path of the City forward who buried the ball from close range. The game was seconds away from a restart and then the referee and the linesman came together before chalking the goal off for an offside decision, leaving the home supporters furious.

Clearly the moment in the game that the outcome hinged on, down the other end just before the hour mark the vistors doubled their lead. Cody McDonald did well to engineer a pass to Andy Barcham and despite having the angle against him, he still managed to see a low shot find its way into the back of the net at the near post.

Kai Bruenker and Matthew Lund came on in a double substitution for their debuts for the Bantams but just a few minutes after their introduction, Wimbledon scored their third goal. McDonald was a nuisance for most of the afternoon and after getting the better of Nathaniel Knight-Percival on the left flank, he got into the box before seeing a relatively tame shot find the net.

Matters got worse for City with ten minutes left on the clock when McDonald scored his second and Wimbledon's fourth of the afternoon. This time, with the Bantams pouring forward in search of goals, the visitors broke quickly on the counter attack and Joe Pigott's through ball found the Dons forward who slammed the ball past Sattelmaier.

Jordan Gibson came off the bench late on and caused the visitors some problems. One of his first involvements saw him get the better of his man down the left-hand side before seeing a low angled drive clip the outside of the post.

Although Gibson saw a fierce attempt go comfortably wide of the target in added time with Wimbledon camped in their own third of the field, the outcome of the game was long settled at that stage. So, it turned out to be another tough afternoon to take and another hugely bitter pill to swallow for Stuart McCall's men. All attention now turns to trying to bounce back at Oldham next weekend.