City's penultimate pre-season friendly of the summer ended in defeat as a strong Newcastle United outfit collected a comprehensive victory at the Northern Commercials Stadium.

McCall's men had managed to keep the Magpies at bay up until the interval but four unanswered goals from Rafael Benitez's side in the second period resulted in a 4-0 success for Newcastle.

Dwight Gayle bundled the ball home early into the second period to open the scoring, with Jacob Murphy doubling Newcastle's lead less than a minute later.

Aleksandar Mitrovic grabbed Newcastle's third from close range later in the half before Murphy completed the scoring with the visitors' fourth soon after.

McCall was able to give six of his players the full 90 minutes, while Alex Jones made a return to the side after missing the Sunderland game at the weekend with a tight groin.

Timothee Dieng, Dominic Poleon and Paul Taylor weren't risked due to knocks, however, while Charlie Wyke also missed out as he continures his recovery from a hamstring injury.

City, who began the game with three central defenders, enjoyed the first opening of the friendly through Tony McMahon with just over two minutes on the clock.

From Nicky Law’s short free-kick, McMahon took aim from over 25 yards out and the dipping effort had to be pushed over by Newcastle shot-stopper Rob Elliot.

In response, the Premier League side engineered a chance of their own, Magpies skipper Jonjo Shelvey finding Matt Ritchie in the box but the left winger's low drive was straight at Colin Doyle.

Shelvey then went for goal himself shortly afterwards with a drive from outside the box but again the strike was claimed by Doyle. 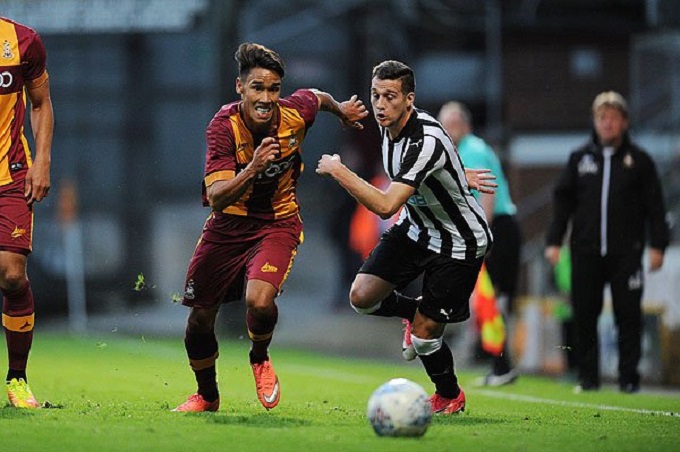 As United settled into the contest, Isaac Hayden’s long ball from distance was controlled superbly by Gayle inside the box.

Midway into the first period, Newcastle had the ball in the net but the goal was disallowed for handball.

A fine run from Shelvey down Newcastle's right flank ended with the midfielder fizzing the ball across the six yard box.

The ball found the corner of Doyle's goal but any United celebrations were cut short as the last touch seemed to come off the arm of Gayle in the middle.

The visitors' next attack then saw the Magpies hit the woodwork, Ritchie's whipped in cross from left bouncing off the top of Bantams' crossbar.

Newcastle threatened to spring forward on another attack just past the half hour mark when they broke at pace on the counter.

Ayoze Perez looked to play Gayle in with a clear run on goal, but the striker's progress was halted via a superb interception from Matthew Kilgallon with a well-timed sliding tackle.

With City continuing to work tirelessly to try and keep their visitors at bay as half time approached, Ritchie fizzed a dangerous centre across the six yard box, just narrowly out of the reach of the lurking Gayle in the middle.

Gayle then came within inches of finding the top corner with a superb curling effort from the edge of the box.

A fantastic long ball from Shelvey had picked out Gayle for the forward's near miss, and the England international was at it again two minutes from the break, superbly picking out the run of Christian Atsu from distance.

Atus looked set for a sight at Doyle's goal but the recovering McMahon showed great reactions to get back and make an important block.

As was the case in the opening half, City created the first scoring chance of the second period.

Shay McCartan found the run of Jake Reeves in the box three minutes after the restart and the midfielder fired narrowly wide of Elliot's near post. 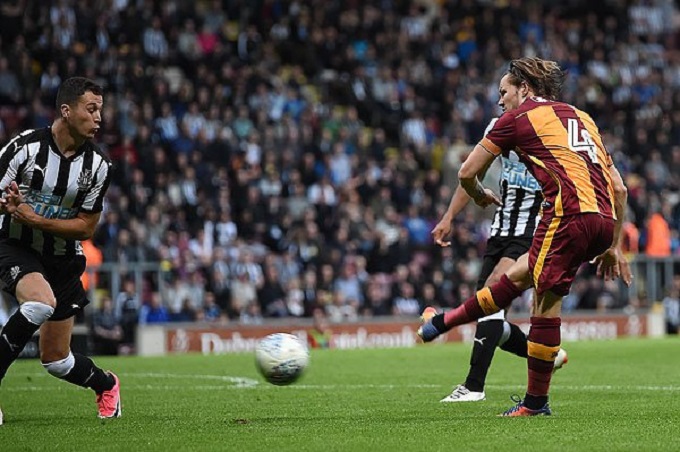 Despite that bright start to the half for City though, Newcastle quickly found the breakthrough soon after.

Atsu's low cross into the six yard box was bundled towards goal by Gayle. Doyle tried to crawl the effort away but the ball had just rolled over the line before he could do so.

One became two for Newcastle less than a minute later when half time substitute Murphy was played in behind City's defensive line.

Murphy showed great composure to round Doyle and slot home despite the presence of a couple of recovering City defenders.

Mohamed Diame, another one of the three replacements at the interval for Newcastle, fired in a low drive from just outside the box shortly before the hour mark that was held by Doyle.

United then made further changes - six of them in fact - soon afterwards to give the Bantams a different kind of threat to contend with.

One of the new additions to the action for Newcastle, Siem De Jong, crossed into the box from a wide free-kick just outside the area with his first contribution to the game, but Ciaran Clark prodded over in the middle.

United 'keeper Fredie Woodman - a member of England U20s' successful World Cup winning squad in the summer - was also introduced into the game by Newcastle as one of their batch of six.

Adam Chicksen gave the young shot-stopper his first save of the evening when the left-back fired in a low angled drive from inside the box.

Aided by the freshness of their new players entering the field, the Premier League side were still looking a strong threat going forward, and they registered their third of the night just under fifteen minutes from the end through Mitrovic.

Romain Vincelot was unable to prevent Rolando Aarons from using his pace to latch onto a forward pass.

Aarons then centred the ball to give Mitrovic a simple task of slotting in from close range.

The busy Mitrovic was getting involved again soon afterwards when he powered clear into the box but Doyle was out quick to smother by his near post.

The Magpies kept attacking, however, and they soon claimed a fourth in the fixture when a cross dropped into the path of Murphy and he rattled a drive into the top corner past Doyle's dive.

McMahon and Aarons were booked a few minutes later following a brief altercation between the two by the halfway line.

Newcastle looked to further add to their tally when Aarons, Murphy and Mitrovic combined on a swift counter-attack.

Mitrovic tried to fire through the legs of Doyle inside the box but City's shot-stopper was able to just about get enough on the ball to repel the effort.

City's final chance to register on the scoresheet came three minutes from the end but McMahon's goal-bound free-kick was pushed away by a smart save from Woodman.

As the game drew to a close, Newcastle once again threatened on the counter-attack.

Mitrovic played Aarons through on goal but a brilliant recovery tackle from Daniel Pybus saw the young midfielder put the ball out for a corner.

Newcastle's last attempt for goal on the night came in the final minute of the game, De Jong firing narrowly over from the edge of the box after being fed by Jack Colback.