Bantams boss Stuart McCall was able to give as many as seven members of his squad the full match distance, as City lost 3-2 at home to Sunderland in their latest pre-season friendly.

In the Bantams' first encounter at the Northern Commercials Stadium since the summer break, Sunderland raced into a three-goal lead at the break, but a strong City response in the second period saw McCall's men pull two goals back.

Early goals from Josh Maja and Jeremain Lens put Sunderland on the front-foot at the start of the contest.

Billy Jones then bundled home a third for the Mackems shortly before the interval.

With City looking more forceful after the restart though, Tony McMahon pulled one back from the penalty spot after the busy Shay McCartan had been bundled over in the box.

City's young trialist winger then added a second for the Bantams in the final minute of injury time.

Sunderland took a fifth-minute lead through Maja, the young striker on hand to convert from close range with a cushioned volley following Lens' cross.

Lens then went from provider to scorer under three minutes later when he burst through City's defence, turning away from Nathaniel Knight-Percival in the process, before proceeding to loft the ball over the helpless Rouven Sattelmaier from inside the box

Despite conceding the two early goals, City had looked solid enough in possession in the early stages, with Adam Chicksen and Alex Gilliead sending over some threatening crosses from the flanks.

The Bantams' first effort on target of the match came seventeen minutes in when Nicky Law's low drive from distance was gathered up at the second attempt by Sunderland's trialist shot-stopper Robbin Ruiter.

At the other end, Didier N'Dong saw a shot deflected wide shortly afterwards after the powerful midfielder had robbed Daniel Devine of the ball.

The half continued to see City look tidy on the ball for spells but Sunderland always carrying a clear threat with their obvious attacking quality.

McCartan showed a glimpse of City's own quality in forward areas shortly before the half hour mark when the Irish striker burst past two Sunderland defenders and into the box.

Strike-partner Dominic Poleon was in the middle looking for the cut-back but McCartan chose to go it alone and his shot from a tight angle by the near post was blocked behind by Ruiter.

Later in the half, N'Dong tested Sattelmaier with a low drive from range, but McMahon's wayward shot on his weaker left foot from a similiar distance at the other end failed to trouble Ruiter.

Sattelmaier denied Sunderland a third for the game five minutes before the break when he superbly tipped over following Maja's shot for goal on the turn.

The German shot-stopper was unable to prevent the visitors adding to their afternoon's tally soon after though.

City failed to clear their lines from the resulting corner, resulting in N'Dong getting a shot away at goal from just outside the box.

Sattelmaier was able to get something on the shot as it came through a host of bodies but Jones was on hand to bundle home from close range on the rebound.

City did manage to engineer one final opening before the interval when Chicksen drove towards the far post with a low drive from an angle inside the box.

The shot was parried by Ruiter but a lurking Poleon wasn't quite able to pounce on the loose ball.

Devine did eventually get a shot away but his hurried effort while under pressure from a couple of Sunderland defender went over. 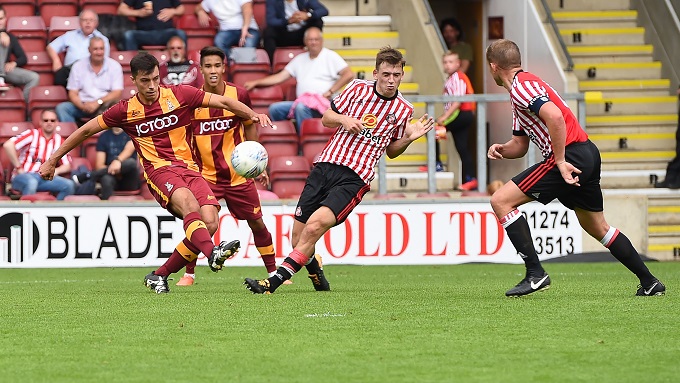 The Black Cats started the second period strongly, and after James Vaughan and Khazri had seen efforts go narrowly over early into the half, Knight-Percival was required to stand up and block a N'Dong effort from inside the box.

Lens was nearly played through on goal just before the hour but an alert Chicksen was on hand to get his body in the way and see the ball back to Sattelmaier.

Vaughan then fired straight at Sattelmaier from just outside the box shortly afterwards after Lee Cattermole had dispossessed Devine via a strong challenge.

The Bantams were awarded a spot-kick in the sixty-fifth minute when McCartan was bundled over in the box by N'Dong.

Regular penalty-taker McMahon took responsibility for the kick, sending Ruiter the wrong way to get the Bantams on the score-sheet.

Taylor nearly pulled another goal back for the Bantams following his arrival onto the pitch, but Ruiter blocked his shot after the sub had been played into space by the hard-working Jake Reeves.

Chicksen then tried his luck soon after with an effort from distance that whistled not too far over Ruiter's bar.

As City finished the game strongly, Taylor was again involved in another Bantams scoring chance five minutes from the end.

Patrick broke clear down City's right before crossing low into the middle for the lurking Taylor.

Taylor looked set to fire home on the stretch but his effort for goal was somehow repelled via a strong block from Ruiter.

Knight-Percival sent a free header wide of the target following McMahon's cross into the box in the latter stages, but there was still time for City to add a second.

In the second and final minute of injury time, Gilliead crossed low into the box and City's trialist on show for the afternoon finished neatly from close range.