Michael Collins' Bantams travel to Shrewsbury Town on Saturday to kick off their 2018/19 Sky Bet League One campaign.

The Bantams were 1-0 winners at Shrewsbury last season - and drew 0-0 with the Shropshire outfit on home soil.

Much like City, the home side look set to field a new-look starting line-up following the arrivals of 11 new signings - under new manager John Askey.

Defender Kieran Kennedy has followed his manager from Macclesfield and midfielders Doug Loft, Charlie Colkett, Josh Laurent and Fejiri Okenabirhie are also in contention to feature, after recently arriving at the Montgomery Waters Meadow Stadium.

Michael Collins has a total of 15 new signings in the frame ahead of tomorrow's season opener.

A near brand-new starting 11 is expected to feature, led by recently-named club captain Josh Wright - who arrived at the Northern Commercials Stadium back in May.

Danny Devine, Cameron Hawkes, Jake Reeves and Alex Jones are sidelined through injury and will play no part this weekend.

Kevin Johnson will be the man in charge on Saturday, assisted by Abbas Khan and Alan Clayton. The fourth official for City's Sky Bet League One opener is Hristo Karaivanov.

HEAR FROM THE COACH

The Bantams will wear their home strip on Saturday, made up of predominantly claret, with black shoulders and amber trim.

City supporters can back the Bantams for success at Shrewsbury with Sky Bet!

Bradford are currently priced at 2/1 to defeat Shrewsbury at Montgomery Waters Meadow and at 7/1 to run out 1-0 winners.

George Miller is available at 13/2 to open the scoring, while Jack Payne can be backed at 3/1 to score at anytime during the 90 minutes.

Fans can place their bets now - with Sky Bet - by CLICKING HERE.

PLEASE NOTE: All odds are subject to change.

Full audio match commentary of the match can be found via iFollow Bantams. Keep up to date with commentary from our media partners BBC Radio Leeds for match action and reaction from the game.

Post-match interviews from Michael Collins and his players, plus extended match highlights over the coming days - are also available via iFollow.

Michael Collins' Bantams began the new campaign with a hard-fought victory over Shrewsbury Town in their season-opening fixture at Montgomery Waters Meadow.

Jack Payne netted the all-important goal for City twenty minutes in; the diminutive attacker firing home from inside the box to secure a 1-0 win and the first three-point haul of the season.

In an entertaining and sometimes breathless encounter, both sides hit the woodwork twice after the break, with sub Eoin Doyle - one of eleven City debutants on show during the game - close to a goal soon after coming on.

While Doyle began from the bench, Collins named nine of the Club's other summer signings in the starting XI for his first league outing as City Head Coach.

Before the action got underway in the August sunshine, Collins and his men did their best to get City's 1,500+ away support revved up for the occasion.

Following their warm-up schedules, the Bantams took part in a pre-match huddle on the pitch right in front of the away end of the stadium.

The vocal travelling supporters roared their approval, and City responded accordingly with a bright start to the game.

Initially playing behind the main striker of George Miller, Payne and Sean Scannell in particular looked busy from the very off as City put the hosts on the back foot.

Shrewsbury tried to respond to City's encouraging opening with some attacking football of their own.

Despite the best efforts of the lively Shaun Whalley, who looked a threat for the hosts on more than one occasion, the Shrews were blocked out by City's organised back three, marshalled superbly on the day by the outstanding Anthony O'Connor.

City were rewarded for their enterprising beginning to the match when they took the lead twenty minutes in.

Hard work from Miller enabled the striker to keep the ball alive by the byline as Shrews defender James Bolton looked to win a goal-kick.

Miller moved the ball back towards the on-rushing Payne, who arrived just inside the box at the right time to fire low past Shrewsbury 'keeper Joel Coleman with a left-footed strike that found the far bottom corner. 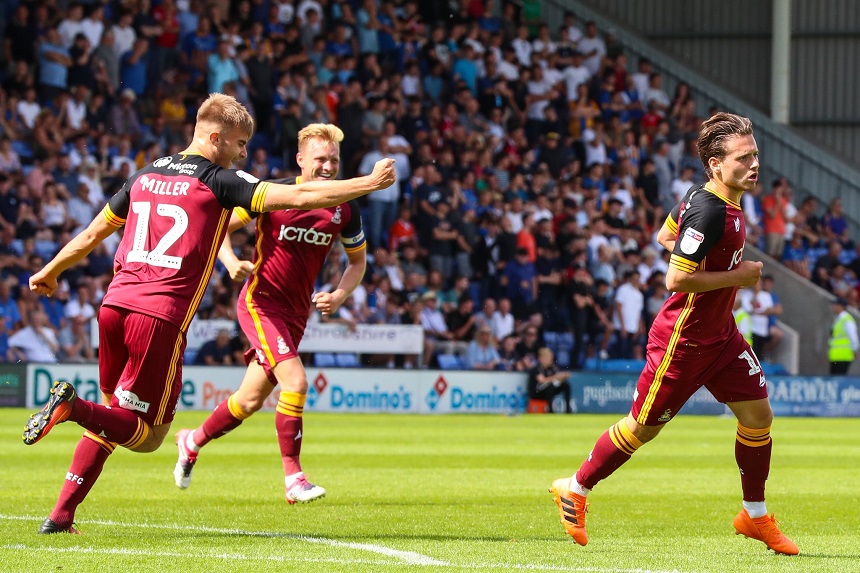 In fairness to Shrewsbury - last season's beaten play-off finalists - they showed creditable spirit after the blow of conceding Payne's opener.

Charlie Colkett and Whalley fired narrowly wide with efforts from outside the box later in the half, while Richard O'Donnell was required to tip over a Kieran Kennedy header from a corner.

Shrewsbury enjoyed a strong ending to the opening period but City stood strong to keep their lead intact going into the break.

The Shrews maintained their momentum from the end of the first half; making a strong start to proceedings after the restart.

An alert O'Connor got himself back into position to make an important headed clearance behind following Omar Beckles' fierce goal-bound strike from a Bolton cross.

As Shrewsbury continued to make a game of it, the home side went even closer just four minutes later.

A ball into the box fell kindly into the path of Josh Laurent but the midfielder crashed his strike against the bar from close range.

With the goal gaping, Laurent got another bite of the cherry when the loose ball bounced back his way but he snapped at the chance and fired over.

City's response to Shrewsbury's challenge was to switch shape slightly and bring on new striker Doyle for Joe Riley just past the hour mark.

Just minutes after entering the field, Doyle came agonisingly close to making himself an instant hero with the City fans behind the goal.

A superb surging run from Scannell saw the attacker motor past three Shrewsbury players before driving the ball across the six yard box.

Doyle was in position in the middle looking for the close range finish but his strike hit the base of the far post via a faint touch off Coleman. 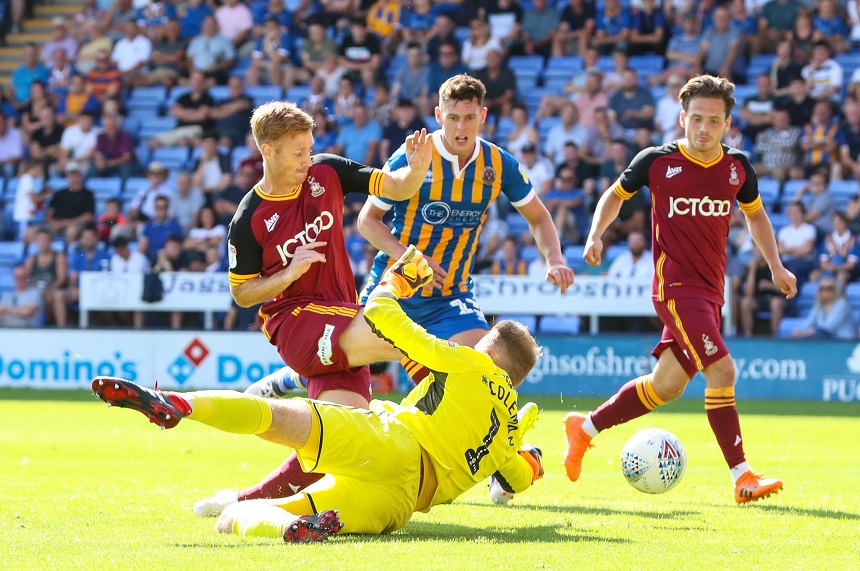 As the game opened up, the Irish forward was involved again soon after when Payne played him in on goal on the counter-attack.

Doyle elected to pass square to the supporting Miller but the striker, who was actually flagged offside, put wide.

With City unable to finish the game off at that stage, Shrewsbury nearly hit back at the Bantams roughly ten minutes before the end.

Former Bantam Alex Gilliead, who entered the field as a second half substitute, crashed a drive from just outside the box against the bar with O'Donnell at full stretch.

The chance sparked a hectic finale at the Montgomery Waters Meadow, as City looked for a finishing second goal rather than thinking merely of shutting up shop and soaking up any home pressure.

Doyle fizzed in a low drive from inside the box that nearly squirmed under the body of Coleman, with the grateful shot-stopper scrambling across his box to gather up at the second attempt.

As the game continued to flow from one end to the other in the final minutes, Laurent and Shrews sub Fejiri Okenabirhie failed to test O'Donnell with strikes from Shrewsbury attacks.

A watchful Coleman then clung onto a well-struck Josh Wright shot from the edge of the box at the other end shortly afterwards.

City showed their intentions to keep trying to force Shrewsbury back when they could by bringing on winger Sherwin Seedorf for industrious midfielder Akpan three minutes from the end.

The final minute of normal time saw Tyrell Robinson - another introduction off the bench for the Bantams in the second period - hit the woodwork himself.

Wright's cross-field pass found Robinson in space on the left; the winger's volley for goal nearly caught out Coleman and the goalkeeper had to push the effort behind via his near post.

Five minutes of extra time followed, but City expertly saw out what could have been a tense and nervous period to claim their first points of the season.

Collins' men will now turn their attentions to their first home league match of the season next Saturday, a mouth-watering Yorkshire derby against day one league leaders Barnsley.

Match stats and live text updates from throughout the game can be found via the Match Centre - HERE.