A spirited late fightback from David Hopkin's Bantams helped to secure City a replay with Peterborough United and a place in Monday's Emirates FA Cup third round draw.

Peterborough had looked set for victory in the closing stages of Saturday's second round tie thanks to first half strikes from Ivan Toney and Siriki Dembele, but a stunning effort from distance by Kelvin Mellor six minutes from the end of normal time got Hopkin's side back in it.

The Bantams then completed the comeback in the eighty-ninth minute when sub Luca Colville's drive from just outside the area deflected in past a wrong-footed Posh goalkeeper Aaron Chapman.

As the season moves into December, this result means City have now lost only two out of their last seven league and cup matches.

The drawn tie also puts the Bantams in the hat for the FA Cup third round draw for the fourth time in the last five seasons.

Hopkin made three changes to his side for City's second trip to the ABAX Stadium in two weeks.

Following Tuesday's League One game at Luton Town, Anthony O'Connor, Jim O'Brien and Jack Payne were all recalled into the starting XI.

O'Connor, of course, was the player who netted for City in the 1-1 draw in the league at Peterborough last month.

The Irish defender's goal had come during a bright opening to the match from the Bantams that day.

Sadly for City this time around, however, their initial play in the opening to Saturday's tie didn't quite have the same 'spark' to it as before.

The only points of note from a low key opening to the game were early bookings for recent signing Paul Caddis and Karl Henry. 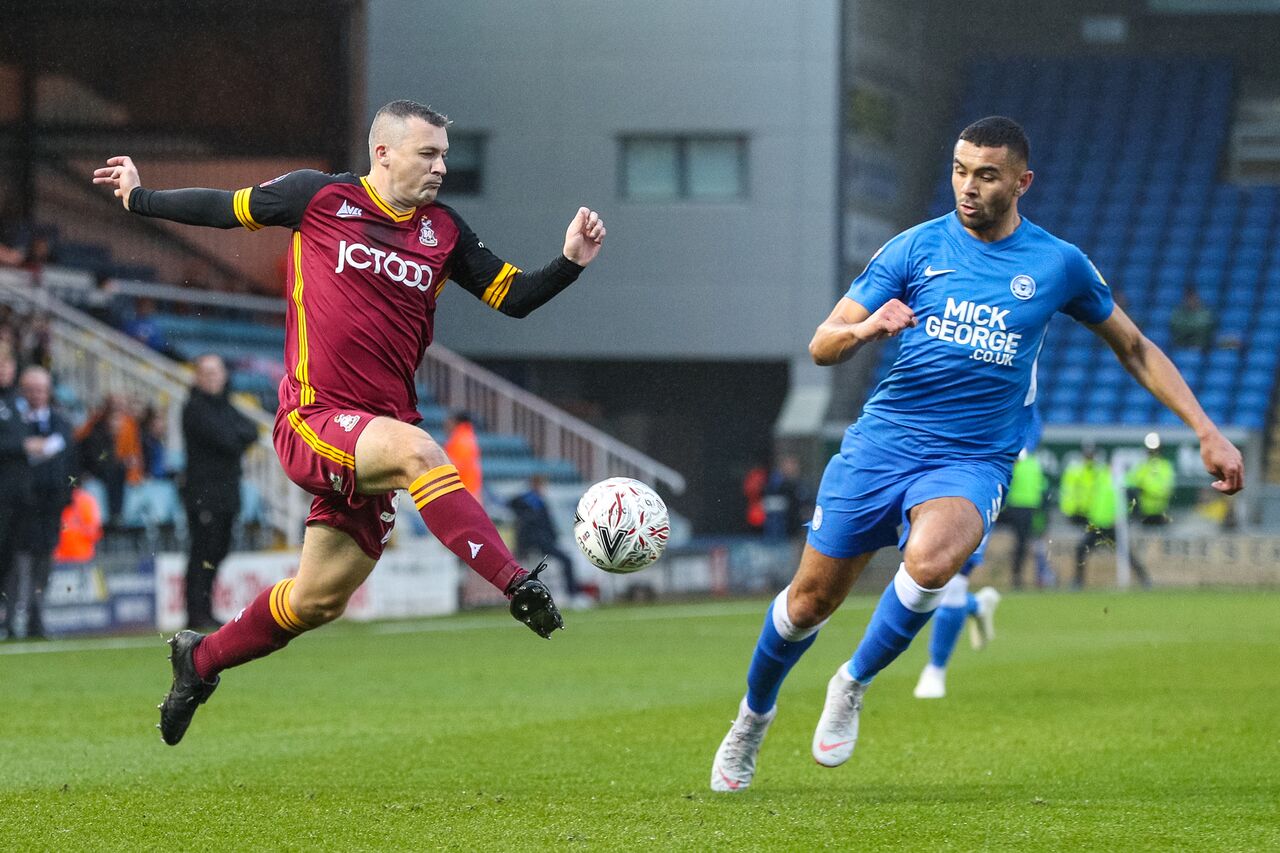 The dangerous Dembele did try to get things going in the City box, but twice he was denied by blocks from Bantams defenders.

Although Peterborough did most of the pressing in the first quarter of the game, it was City who registered the first attempt on goal of the tie just past the fifteen-minute point

A short free-kick from the Bantams near the corner flag resulted in Payne crossing into the box, but Mellor's header was straight at Chapman.

Peterborough had their own effort on goal five minutes later when Matt Godden fed Toney into shooting space inside the box.

Toney curled a strike towards the corner but the drive was pushed behind by Richard O'Donnell.

The resulting corner from Marcus Maddison was met by Ryan Tafazolli but his far post header across goal was gathered up by O'Donnell.

After being denied by O'Donnell with his first effort, though, Toney did fire the hosts in front just before the half hour mark.

Peterborough actually began the move counter-attacking from a City free-kick.

As The Posh cleared their lines, Maddison was able to find Toney in space in the box via a ball from the left and the striker beat O'Donnell by his near post with a first time finish from an angle.

Following the blow of City conceding, David Ball then added to the Bantams' caution count soon after thanks to a heavy challenge on Dembele.

Jim O'Brien dragged a strike wide from outside the box minutes later as City tried to engineer a response.

At the other end, a clearance from O'Donnell deflected off Toney and into the path of Godden, but the striker's first time effort sailed over with the City 'keeper out of his goal.

Godden was involved again in the action five minutes before the break, but his shot on the turn from inside the box was blocked away by Mellor.

As the game moved towards the break, City looked set for a one-goal deficit to work against in the second period.

Sadly for Hopkin's men, however, there was still time in the half for Peterborough to double their lead.

In the first of two minutes of injury time added on at the end of the half, Toney flicked the ball into the path of Dembele to give the winger a run through on goal.

Dembele burst away from Paul Caddis and Adam Chicksen before slotting home into the corner via the inside of the far post. 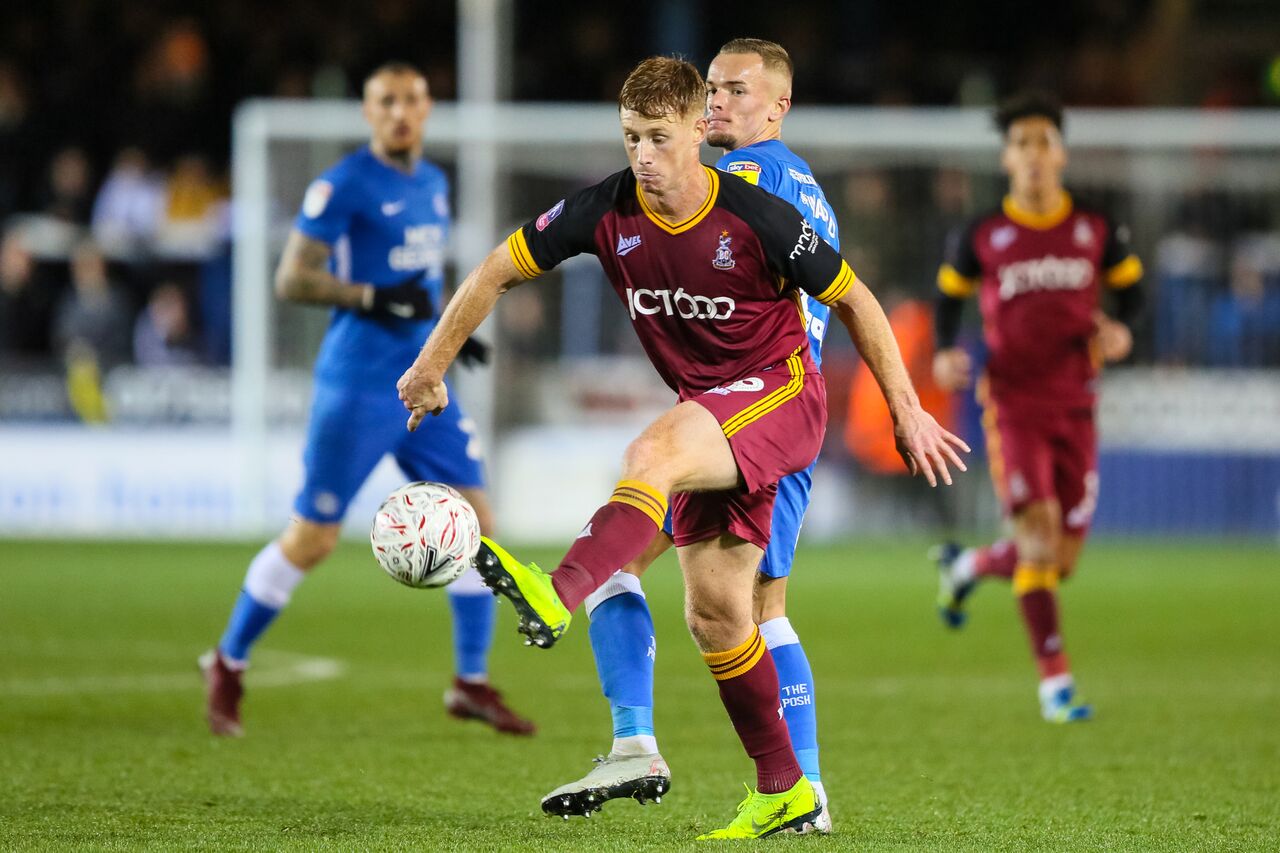 The goal understandably put the Bantams up against for the second period, but they started after the interval with a low drive from Eoin Doyle that was tipped behind by Chapman.

Doyle had another go for goal before the hour mark but his curling left-footed effort flashed high and wide of Chapman's far post.

Peterborough came back at the Bantams, with Maddison seeing a cross-come-shot from the right pushed away by O'Donnell.

Seconds later, Dembele teed up Louis Reed but the midfielder volleyed over from just outside the box.

With twenty five minutes of the contest to go, Hopkin introduced Colville and George Miller into the game for Jim O'Brien and Ball.

For Colville, it was the young midfielder's first action since damaging his knee at Blackpool in Hopkin's first game back in early September.

Peterborough had a penalty appeal turned down shortly afterwards when Toney went down in the box under a challenge from Chicksen.

As the game moved into the final fifteen minutes, Dembele drove into the box from the left - twisting and turning into a shooting position - but his eventual strike rolled wide of its intending target.

With City trying to force some pressure on their hosts despite time running out, Payne fired not too far past Chapman's far post with a low drive.

The Bantams did give themselves some hope to cling onto in the eighty-fourth minute, and what a strike it was. 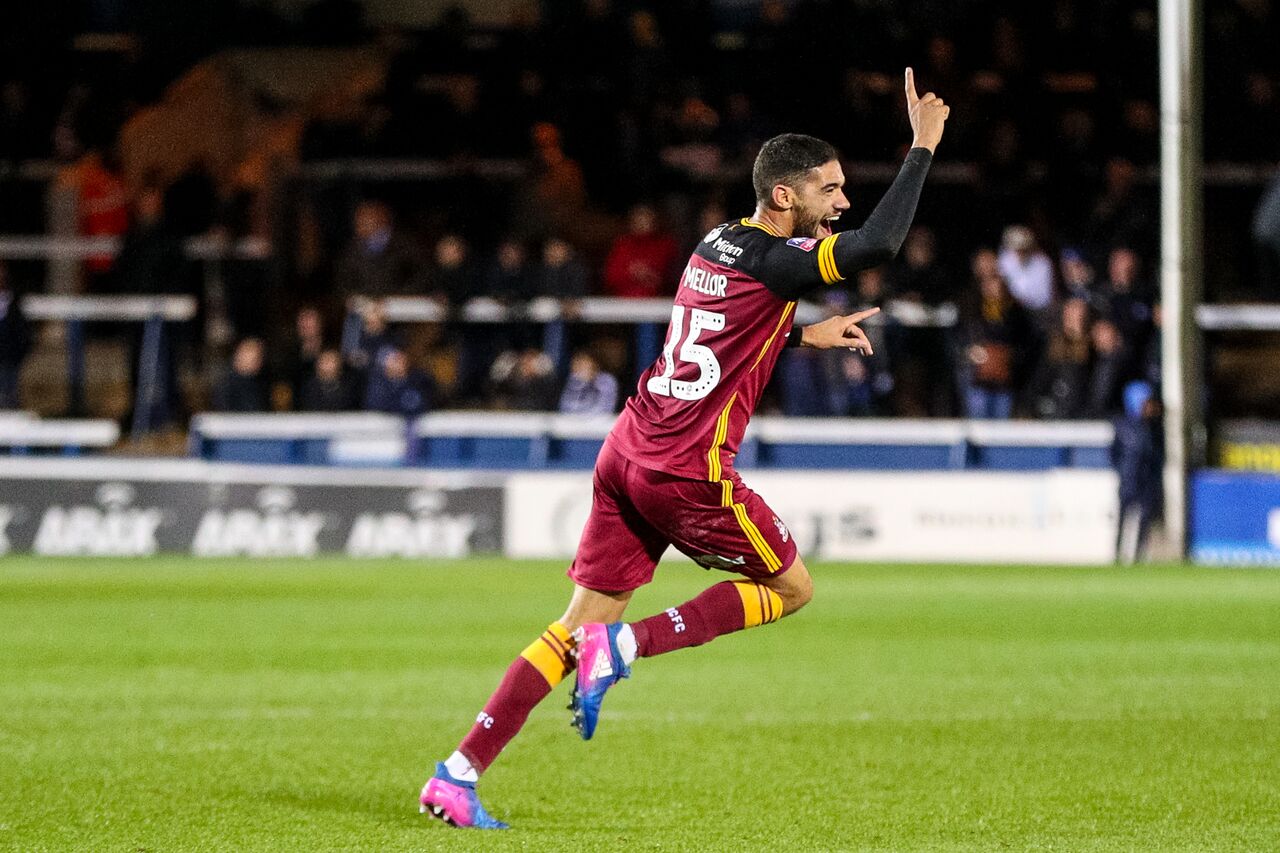 Mellor was given room to strike for goal from roughly twenty-five yards out and the defender duly obliged, rifling home a stunning strike that flew into the top corner.

It was certainly an impressive way for Mellor, who played at centre half for the tie, to open his account for City.

The goal naturally gave City a much-needed shot in the arm, and they completed the comeback just five minutes later.

A ball into the box from Lewis O'Brien was contested by Bruenker and Tafazolli.

City will now have another crack at Peterborough in ten days' time at Valley Parade - the third time the two sides will have met in less than a month - for a place in the last sixty-four of the famous old competition.

Match stats, line ups and action from the Peterborough FA Cup can be found via our Match Centre - HERE.