David Hopkin's Bantams were forced to settle for a share of the spoils following an action-packed six-goal encounter with Plymouth Argyle at Home Park.

A Jack Payne double and a second half effort from the recalled George Miller saw Hopkin's men take the lead three times, but goals from Plymouth's Freddie Ladapo (2) and Joel Grant ensured the Pilgrims fought back on each occasion for a 3-3 draw.

In a thoroughly entertaining contest, Graham Carey hit the post for the hosts with a free-kick in the first period, while Miller was denied an injury time winner for City when Plymouth 'keeper Matt Macey repelled his angled drive from deep inside the box.

Although City will perhaps feel they had done enough to warrant the victory, the Plymouth point does at least mean that the Bantams have now only lost once in their last four league games - that defeat coming away to in-form second-placed Luton Town.

Hopkin made just the one change to his side following Saturday's comeback at Peterborough United in the Emirates FA Cup, with Miller coming in for Jim O'Brien.

The fit-again Hope Akpan was named among City's substitutes.

In wet and windy conditions, City looked set for a challenging afternoon, but they were given a dream start to the contest when they took the lead in just the fourth minute.

A loose touch from Ryan Edwards gave Miller a chance to run clear into the box.

Miller's drive for goal was pushed away by Macey, but Payne was on hand to hook home the loose ball on the rebound.

Sadly for City, though, they could only hang onto their new-found lead for just eight minutes.

Plymouth played a corner short, and Carey whipped a dangerous ball into the box from the right for Ladapo to head home from close range.

Carey himself then saw an effort go narrowly wide from just outside the box  - but it was City who shocked the home fans to retake the lead.

David Ball's strike for goal was pushed out by Macey, but the loose ball was picked up by Miller.

Miller's close range strike was repelled by Macey but the striker regained possession again and teed up Payne.

Payne fired forwards first time and his rising effort crashed in off the underside of the crossbar.

The goal moved Payne up to seven for the season at the top of City's scoring charts. 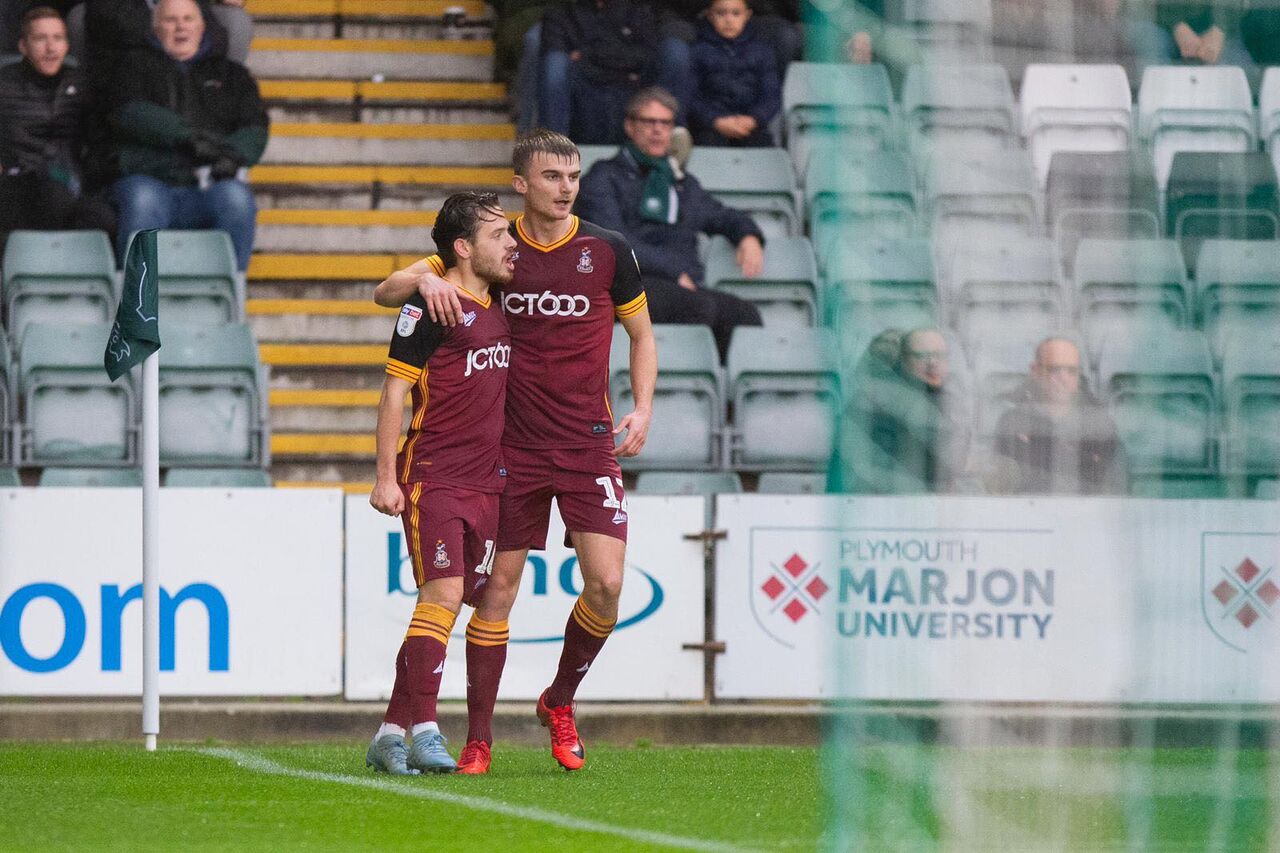 Back came Plymouth once more, though, as the Pilgrims came within inches of responding again soon after.

Carey took aim with a free-kick from just outside the box and the effort took a touch off the City wall before crashing against Richard O'Donnell's near post.

Plymouth kept the pressure on, but Grant fired wide with an angled drive after being found in the box.

As the home side remained on the front foot with the game moving past the half hour, Plymouth skipper David Fox volleyed narrowly over from just inside the box following Grant's cross.

Grant was involved again from Plymouth's very next attack, but his low strike from the edge of the box was repelled via a smart save to his right from O'Donnell.

Plymouth continued to look the more threatening with the interval approaching, but shots and crosses into the box were regularly blocked away by the watchful central defensive duo of Anthony O'Connor and Kelvin Mellor.

An example of this committed defending came from Mellor six minutes before the break when he threw himself at the ball to block a Grant strike from deep inside the box.

Having already blocked shots from Carey and Grant earlier in the half, the Irishman then produced an all-important tackle just before the break to knock behind Antoni Sarcevic's close range effort across goal.

The commendable defending from O'Connor and his team-mates ensured City kept their lead going into the interval.

Sadly for Hopkin and his players, however, Plymouth were able to restore parity just five minutes after the restart.

Grant found himself in space in the box behind City's defences after receiving the ball from Ladapo and flicking it past Paul Caddis.

The attacker's initial strike for goal was blocked by O'Donnell, but Grant was still able to fire home on the rebound despite the attentions of a couple of City defenders nearby.

Amazingly though, City managed to shake off the blow of being pegged back to find themselves in front once more less than three minutes later.

A neat flick over the top from Doyle put Miller through on goal.

Miller's first touch gave him the chance to burst clear into the box before the striker crashed a low drive past Macey and into the far corner.

Miller, who had been involved in both of Payne's two strikes in the first half, celebrated his goal in front of the 252 travelling Bantams supporters behind the net. 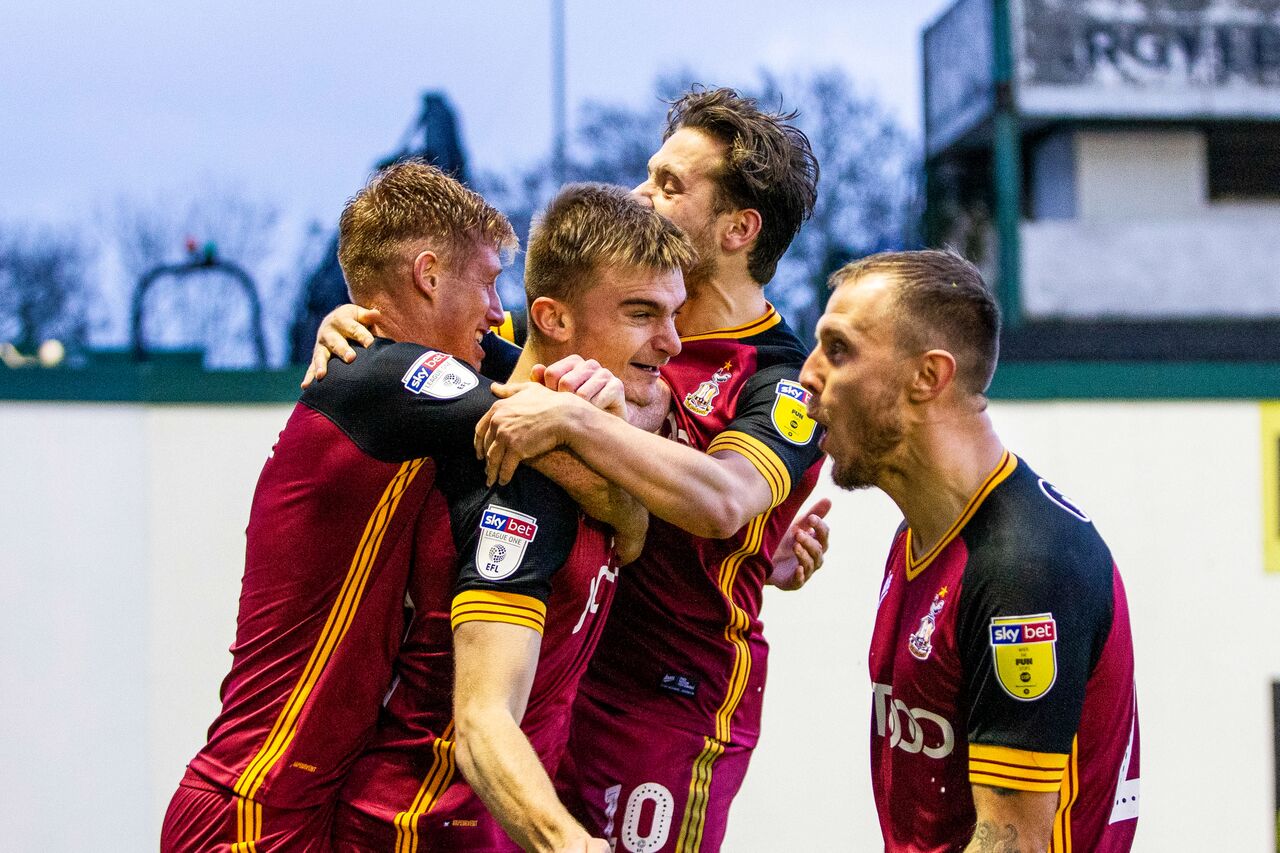 Those fans who made the long journey south had more to be grateful about just minutes later when O'Donnell produced a superb double save to keep City's lead intact.

O'Donnell was first called into action when neat play from Carey set Sarcevic up with a shooting chance deep inside City's area.

Sarcevic's drive was somehow repelled by O'Donnell, however, with the goalkeeper then getting up again to tip Fox's header over the bar from the rebound.

Sarcevic was found in the box again after the hour point but his shot on the turn sailed over.

Soon after, from a Carey free-kick, Plymouth threatened in the box once more as City scrambled to try and clear their lines.

Eventually Sarcevic got a shot away but his close range effort was blocked away by O'Donnell at his near post.

Although Plymouth were the ones looking for a way back into the match again, City were still trying to be a force going forwards themselves.

Payne played Lewis O'Brien into space down the right-hand channel of Plymouth's area, but the midfielder's drive across goal was held by Macey at his near post.

Following his earlier bright saves, O'Donnell was at it again nineteen minutes from the end of normal time; the goalkeeper leaping up to tip over Taylor's goalbound glancing header from a Grant cross into the box.

Unfortunately for O'Donnell and the Bantams, though, Plymouth were able to find a third equaliser of the afternoon from the resulting corner.

Carey's set-piece delivery into the box dropped down free in the heart of City's penalty area and Ladapo stabbed home for his second of the game.

Given Plymouth's attacking play earlier in the game, Ladapo's equaliser could have left City with a difficult last fifteen minutes of so to try and navigate.

Interestly, though, it was City who seemed to step back on the gas and look the more likely scorers in the final stages.

Shortly after Ladapo had dragged a shot wide from the edge of the box for Plymouth, Lewis O'Brien fired the ball dangerously into the middle of the hosts' penalty area.

Niall Canavan initially made a meal of clearing the danger before eventually hooking away with a lurking Payne behind him ready to pounce.

Miller then headed over from a Ball cross just before the end of normal time.

In the middle of five minutes of time added on, the striker was also on the end of a great opening to snatch the win.

Sub Luca Colville, who had replaced Payne minutes earlier, lofted the ball forward to enable Miller to beat the offside trap and enjoy a run on goal.

The angle was fairly tight for the forward, though, and his driven low strike was blocked behind by the legs of Macey by his near post.

Incredibly, there was still time for Miller to enjoy another sight of goal just sixty seconds or so later.

Again, Colville picked out Miller but the striker was denied by a great tackle from Yann Songo'o as he looked to pull the trigger inside the area.

Hosts Plymouth did have one final opportunity from the last attack of the game, but Fox's corner delivery flashed across the box - beating Canavan in the process - before going out for a goal-kick on the far side.

Match line ups, updates and stats from the Plymouth fixture can be found via our Match Centre - HERE.