David Hopkin's Bantams were beaten 3-0 by a buoyant Barnsley side at Oakwell.

In City's first away match of 2019, goals from Barnsley trio Jacob Brown, Kieffer Moore and Alex Mowatt sealed a home win for the Tykes.

Efforts from Brown and Moore in the first period put Barnsley in control at the break, with Mowatt then adding a third in second half injury time for Daniel Stendal's impressive outfit.

On a difficult day for Hopkin's side against talented opposition with eyes on automatic promotion, Adam Chicksen was sent off late on for bringing down Brown just outside the box when he was through on goal.

Recent loan signing Paudie O'Connor was given his Bantams debut in Hopkin's starting XI after the defender joined from Leeds United in midweek.

O'Connor's inclusion in the side meant George Miller moved down to the bench alongside the fit-again Hope Akpan.

City headed into this Yorkshire Derby encounter on top of the form table for recent league results, and Hopkin's men certainly started in confident fashion. 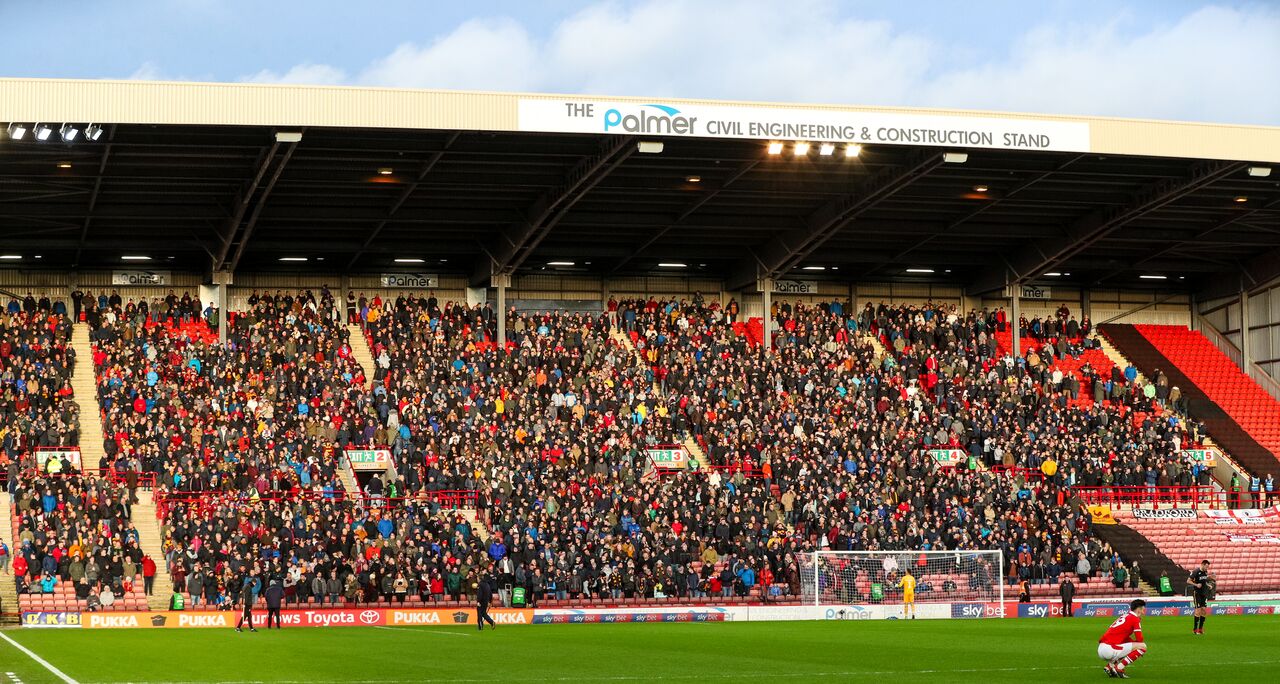 Attacking away from the stand holding over 3,500 Bantams supporters, City began the contest on the front foot and enjoyed the first opening of the game.

Following a short corner routine involving Jack Payne and Eoin Doyle, the former eventually hooked the ball across the box.

The cross was met by Ryan McGowan but his looping header landed on the roof of the net.

After City's promising beginning, though, Barnsley slowly began to find their feet and establish themselves in the contest.

Just before the half hour mark Barnsley managed to take the lead with their first real effort on Richard O'Donnell's goal.

Mowatt's clipped ball into the box was a testing one and the delivery gave Brown the chance to head into bottom corner with a close range downward header.

Barnsley thought they had netted a second soon after when Ben Williams crossed into the area from the left, but Cameron McGeehan was correctly penalised and cautioned for handling the ball into the net.

Sadly for City, however, it wasn't long before the home side did double their advantage with an effort that stood.

As they did for the Tykes' first goal, Thiam and Mowatt combined once again to set things up.

Thiam's neat flick found Mowatt in crossing space and the midfielder's low ball into the six yard box was bundled home by Moore.

That first half burst from Barnsley ensured they went into the break with a firm hold on the game.

In an attempt to loosen Barnsley's grip on proceedings, Hopkin threw on Miller for debutant O'Connor at the break to give City an extra man in attack.

Barnsley continued to look in control, however, as the action got back underway.

After McGeechan had seen a drive from just outside the box deflect over off Anthony O'Connor, Moore headed over from a decent position in the area from Thiam resulting corner delivery. 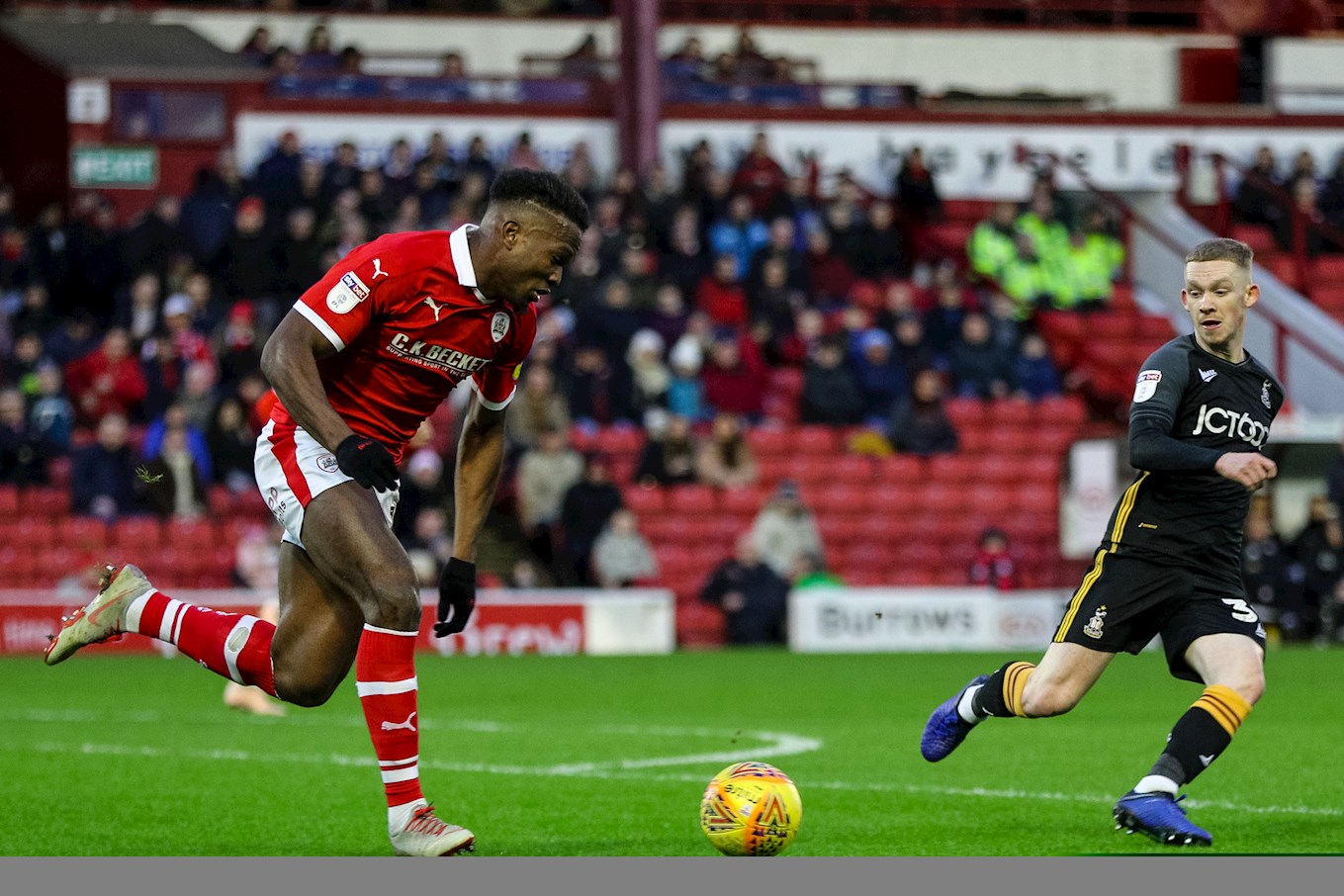 Tykes right back DImitri Cavare tried his luck minutes later, but his low drive from outside the area was saved by O'Donnell.

The powerful defender would also have another go at goal later in the half, with his low angled drive tipped past the post by the City shot-stopper.

The Bantams did engineer a slight opening ten minutes in the second period when Miller was played into space down the right channel.

An unmarked Eoin Doyle was screaming for a pass in the box, but Miller couldn't quite get his cross away and Ethan Pinnock eventually cleared his lines.

In a similar situation, Miller was again found in space in behind Barnsley's defences five minutes past the hour mark.

This time it was Lewis O'Brien in the middle free and looking for a pass, but with Pinnock once again blocking his path, Miller could only end up firing into the side-netting from an angle.

At the other end of the pitch, McGeehan fired narrowly wide with a well-struck drive from just outside the area.

The effort was one of two strikes for goal in the second period for the home midfielder, who was named Barnsley's man of the match.

McGeehan would also fire just past the post with a strike from the edge of the box after being teed up by home sub Mike Bahre further into the half.

Barnsley had the chance to put the game to bed seventeen minutes from the end when a looping header over the top put Thiam through on goal.

The eye-catching attacker had only O'Donnell to beat but he dragged his shot wide.

As the match moved into the final five minutes of normal time, Thiam had another chance to get himself on the scoresheet.

The attacker's strike from the edge of the box was parried behind by O'Donnell via the outside of his far post.

The Bantams were reduced to ten men in the eighty-ninth minute when Chicksen was given his marching orders.

Opening goalscorer Brown was played in on goal with only O'Donnell to beat.

Chicksen tried to recover his ground but the left back ended up clipping the heels of Brown just before he burst into the box.

The attacker did end up still getting a shot away, but referee Jeremy Simpson brought play back and gave Chicksen a straight red card.

Mowatt struck for goal from the free-kick that followed but the curling effort was pushed away by O'Donnell.

Using their one-man advantage, Barnsley did wrap up the contest with a third in the second minute of injury time.

A ball into the box from the right was flicked on by Brown into the path of an unmarked Mowatt.

Mowatt took his time before slotting home past O'Donnell.

The final opening of the match also fell Barnsley's way, but home sub Victor Adeboyejo fired over after Brown had squared the ball to him deep inside the area.

All in all then, a disappointing day for the Bantams where they were unable to quite find an answer to the pace and power of Barnsley's promotion-chasing team.

In truth, though, these encounters against sides looking for the top two probably won't be the games that ultimately decide City's fate either way as they fight to push up the League One table.

The Bantams will have to dust themselves down and try turn their attentions quickly to an important contest with Southend United at the Northern Commercials Stadium next weekend.

Match line-ups, stats and action from the Barnsley game can be found via the Match Centre - HERE.