David Hopkin's in-form Bantams continued their great recent run in the league by kicking off the new calendar year with a comfortable success over Accrington Stanley at the Northern Commercials Stadium.

In City's first match of 2019, goals from Lewis O'Brien, Eoin Doyle and Connor Wood set Hopkin's side on their way to a deserved 3-0 home win over Accrington.

O'Brien gave the Bantams the lead midway through the first period, superbly curling in from the edge of the box following a short corner routine.

Accrington were then reduced to ten men soon after when Offrande Zanzala was given a straight red card for a lunging tackle on O'Brien - a challenge that would sadly force the midfielder off through injury.

Wood, who replaced O'Brien in the first period, sealed the victory for Hopkin's men early into the second period by firing in a fantastic drive into the top corner from outside the box.

Although the performance probably wasn't quite at the same top level that City produced at Rochdale last Saturday, Hopkin's Bantams always looked on their way to another win once O'Brien had given them the lead.

The victory was City's fourth in their last five matches, with the Bantams netting thirteen goals and conceding only once during this profitable period.

Following that thumping 4-0vsuccess at Rochdale at the weekend, Hopkin was forced into making one change to his starting XI.

A hamstring injury to Jim O'Brien meant a recall into the team for George Miller.

Apprentice midfielders Eliot Goldthorp and Jake Maltby were named on the bench.

The New Year's Day's contest took a while to get going, as City made a fairly low-key beginning to the encounter.

The first sight of goal fell Accrington's way five minutes in. Sam Finley dragged a shot wide after the ball had broken into his path just outside the area.

Slowly, though, City began to find their feet and up the tempo.

Experienced Accrington defender Mark Hughes had to block behind when Doyle got in space and fired dangerously across the face of goal.

Ryan McGowan then headed wide from a clipped Paul Caddis cross into the box from the right soon after.

Just past the twenty minute mark, the lively Jack Payne looked to engineer an opening for the Bantams when he burst into the box and fired into the six yard box at pace.

Once again, Hughes was in position to make a vital clearance - this time heading behind - but City weren't to be denied for long. 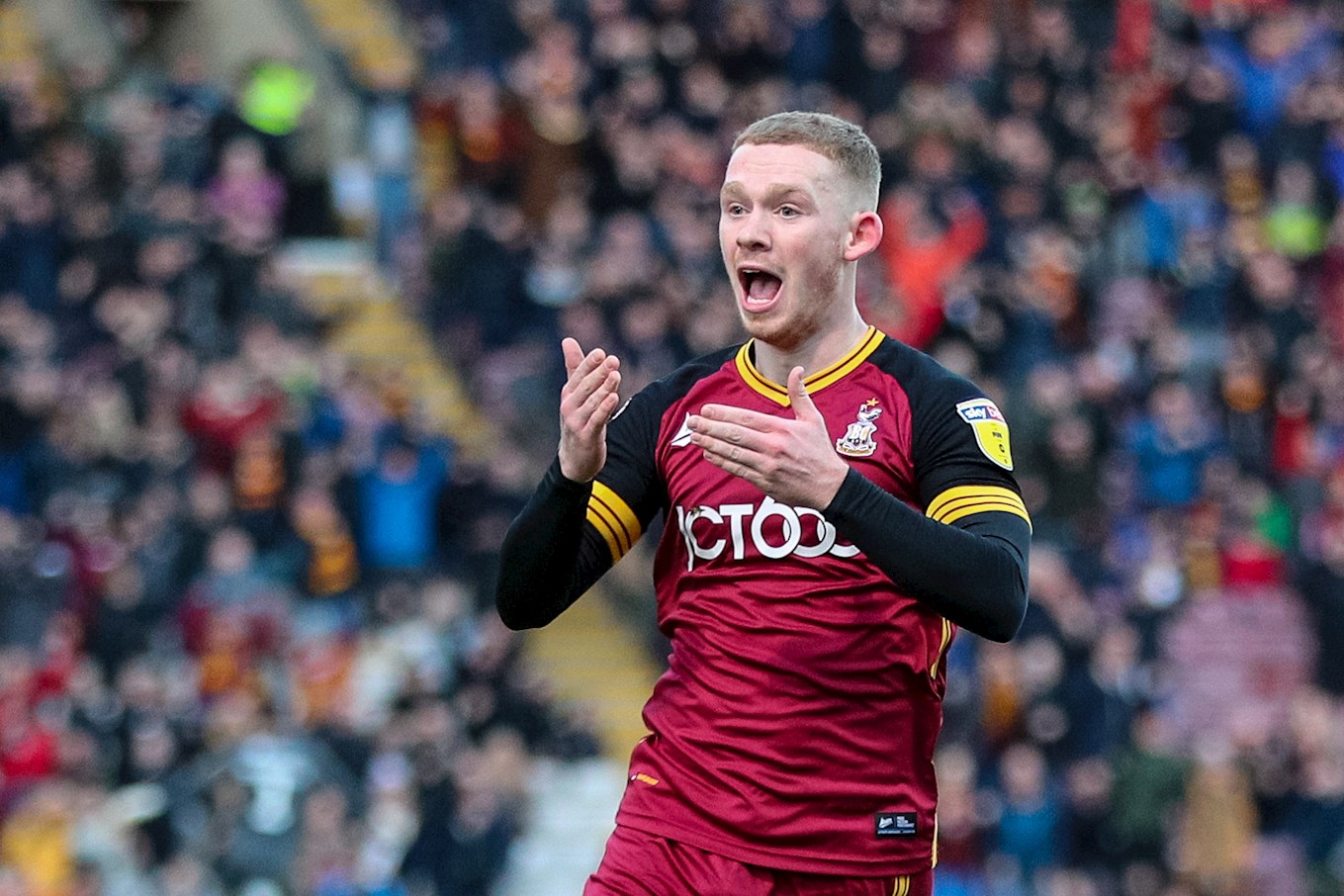 From the resulting set-piece, City played the corner short as the ball was worked out to O'Brien just outside the box.

O'Brien set his sights before curling in a beautiful strike that flew into the top corner past a rooted Connor Ripley.

The goal was O'Brien's first as part of his loan move across West Yorkshire and his maiden strike in pro football.

The pacey and athletic Zanzala, who had looked a possible threat for Stanley in the early stages, was given his marching orders for a lunge on O'Brien as the pair contested a loose ball midway into City's half of the pitch.

Although O'Brien was initially able to continue, the midfielder's injury as a result of the hefty tackle would eventually force the Huddersfield loanee off.

With the clock ticking past the half hour, City doubled their lead through Doyle.

David Ball began the move after a neat piece of skill helped to give the attacker a sight of goal in the box.

Ball's drive from a tight angle inside the area was pushed away by Ripley, but Chicksen recovered the situation on the far side.

Chicksen's low cross found Doyle in a pocket of space and the forward fired home for his fourth goal in five matches. 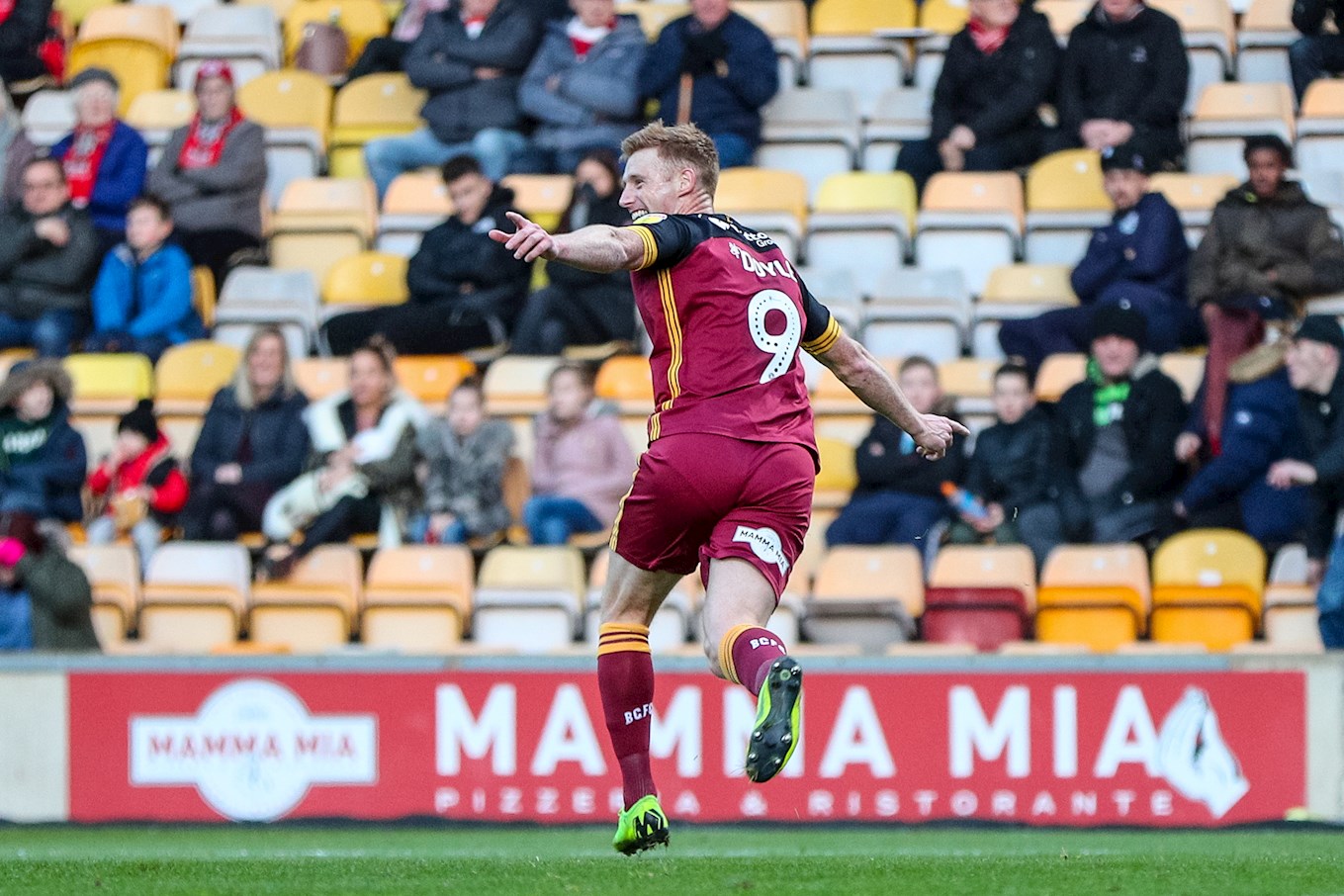 A man up and two goals to the good, the Bantams looked firmly in the driving seat at this stage, but City were given a timely reminder soon after Doyle's goal that they couldn't quite take their foot off the gas just yet.

Finley's low drive from outside the box beat the dive of O'Donnell before crashing against the base of his far post.

City were back on the attack shortly afterwards, however, with Doyle forcing a low save out of Ripley after the ball broke to the Irishman around the edge of the box.

In the final stages of seven minutes of injury time ahead of the interval, Nick Anderton was forced to put behind while under pressure from Miller after a testing cross to the far post from Wood.

Seconds later, Ball fired over with a first time effort from just outside the box.

In an attempt to revive their fortunes, Accrington made two changes ahead of the restart.

Before Stanley had the chance to properly try out their new set-up, though, the Bantams arguably put the game to bed with a stunning third goal less than four minutes after the break.

Wood was found in space outside the area by Payne and the substitute let rip with an outstanding effort that whistled past a motionless Ripley before nestling in the top corner.

The 22 year-old understandably lapped up the applause in front of The Kop after netting his first ever goal in senior football.

In truth, Wood's goal ultimately sealed the game for Hopkin's side with most of the second half still to play.

City kept going for more though. Payne had a strike from an angle inside the box repelled by Ripley.

Neat inter-play from the Bantams then nearly got Doyle in on goal but the striker saw the ball whipped off his toes by Ripley.

Despite the odds looking against them as the half wore on, Accrington did, in fairness, keep looking for a way onto the scoresheet.

Sean McConville fired over with a strike from just outside the box, while Michael Ihiekwe sent a free header wide of the far post via a Finley cross from another visiting attack.

The busy Payne kept looking for another way through for the Bantams. The attacker's curling drive just over twenty minutes from the end was held at the second attempt by Ripley.

Dan Barlaser fired narrowly wide from the edge of the box at the other end, but Payne nearly set up Miller for a fourth City goal via the Bantams' next meaningful venture forward.

A great driving run from Payne got the attacker past Ihiekwe and free down the byline.

Payne pulled the ball back to Miller in space inside the box, but the striker's close range effort was superbly tipped over by Ripley.

With the game heading towards the final ten minutes, Accrington nearly pulled a goal back via one of their half time substitutes.

McConville's curling ball into the box from the left found Connor Hall in space but the replacement forward sent a free header narrowly wide.

The Bantams' third and third change then came three minutes from the end of normal time, Goldthorp coming on for Payne for his second senior appearance.

City managed to see out the closing stages of the encounter to seal another clean sheet to go with the victory.

The win moves the Bantams out of the League One drop zone and up to twentieth in the table.

Match line ups, action and stats from the Accrington game can be found via the Match Centre - HERE.