David Hopkin's Bantams sadly endured a terrible day to forget this Saturday after suffering a hugely-disappointing 4-0 loss to Southend United at the Northern Commercials Stadium.

Coming into the game having won their four previous home matches, Hopkin's men were unfortunately unable to show any of that sparkling recent good form at Valley Parade as they were easily defeated by a well-organised Shrimpers side.

Two goals in the first period from Simon Cox and Sam Mantom gave Southend a firm hold on the match at the break.

A further two goals for the visitors from impressive debutant Stephen Humphrys after the break put the game firmly beyond the Bantams, giving Hopkin plenty to think about going into next weekend's clash at Carabao Cup semi-finalists Burton Albion.

Following defeat at Barnsley last time out, Hopkin made two changes to his starting XI for City's first home match in nineteen days.

Nathaniel Knight-Percival started at left back due to Adam Chicksen's suspension for his Barnsley red card.

Having scored eleven goals and conceded none in that recent run of four successive home wins, confidence will have been high going into this one that City could shrug off the disappointment of the loss at Oakwell seven days earlier.

Sadly for Hopkin and his troops, however, things got off to the worst possible start.

With just over a minute on the clock, a blocked tackle from Paul Caddis fell at the feet of Cox just inside the box.

Cox took on the shot first time and his curling effort with the outside of his boot found the far bottom corner of Richard O'Donnell's goal.

City tried to respond from that early blow, but Jack Payne saw an effort across goal blocked by John White minutes later.

The Bantams' next meaningful attack also involved Payne, with the attacker firing over on the half volley from the edge of the box.

In truth, those chances would be the nearest City's talented playmaker would come to breaking through the defences of the club he started his professional career with.

Payne and team-mates David Ball and Lewis O'Brien - a trio who had been so influential in City's impressive December form - were shackled effectively by Southend and given little opportunity to show their undoubted attacking skills.

Half chances were created at both ends as the first period continued to move along in a low-key fashion.

Eoin Doyle headed over from a Paul Caddis cross later in the half, while Mantom fired at O'Donnell with a bouncing strike from outside the box via a Southend attack.

Mantom found his range in impressive fashion next time around, though, as Southend struck from nowhere to decisively double their lead shortly before the half hour.

A long throw-in into the box from Southend's Sam Hart - signed earlier in the week from Blackburn - was only cleared as far as back as the defender himself on the left channel.

Hart pulled the ball back to Mantom, who then proceeded to fire in an unstoppable shot into the far corner from just over twenty yards out.

From that point, Southend looked full of confidence for the rest of the half with City seemingly on the ropes.

Humphrys could have netted a third before the interval but his low drive from distance was tipped around the post by O'Donnell.

Humphrys was at the heart of another Southend attack four minutes before half time when he was played into space in the box.

The attacker fired the ball across goal from the byline but Ryan McGowan was crucially in position to clear.

There was still time in the half for former Bantam midfielder Timothee Dieng to warm the hands of O'Donnell with a strike from outside the area. 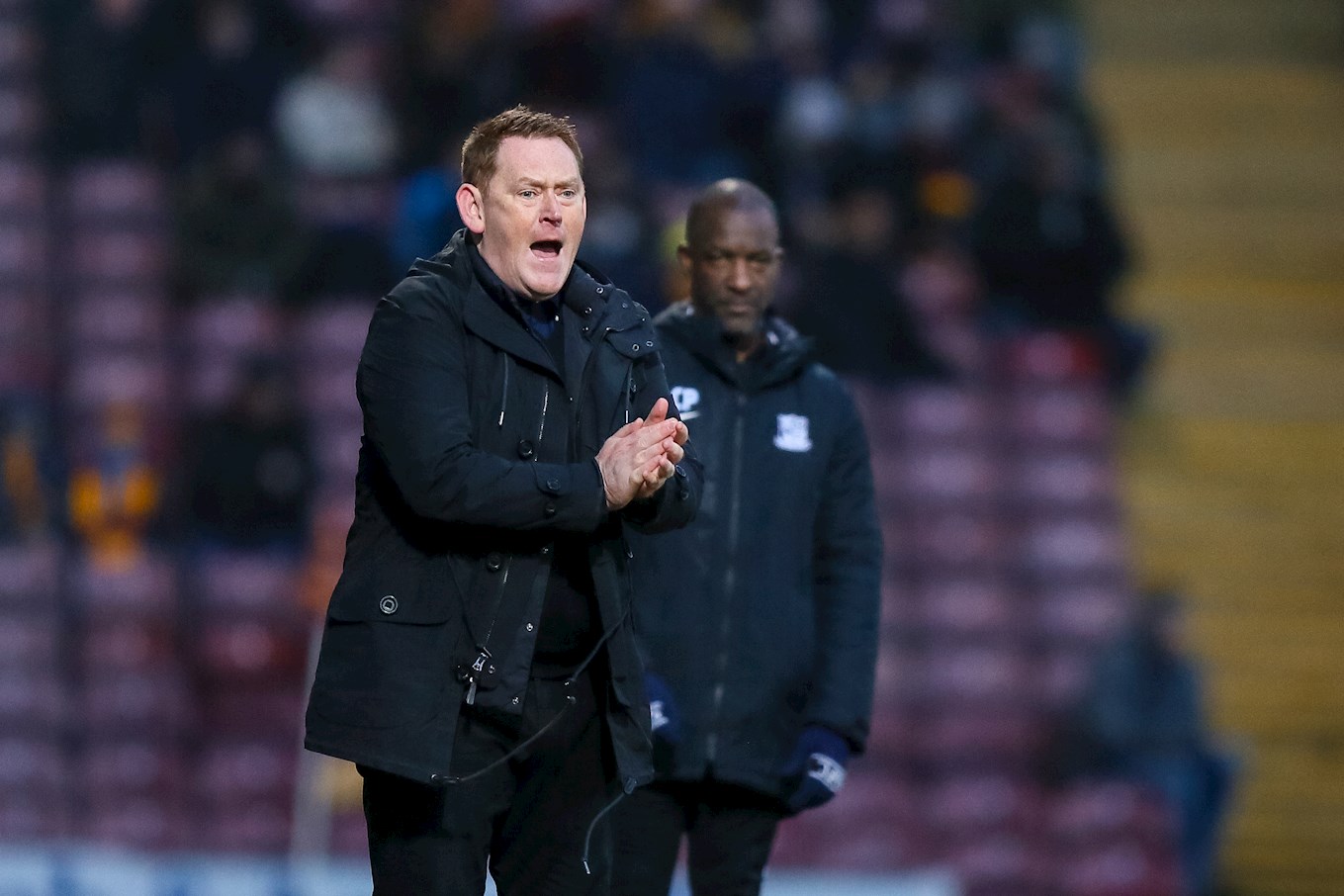 Going into the second period, City will have been, understandably, keen to strike early in an attempt to get back into the contest.

They thought they had done just that eight minutes after the restart when a Payne corner was flicked on by Doyle towards Miller.

Miller headed for goal from close range but the effort was somehow tipped over by Southend 'keeper Nathan Bishop.

A goal there for Miller could have made the story of the game look completely different, but the match was effectively put to bed by Southend less than sixty seconds later.

From a long Southend clearance forward, Humphrys managed to nudge Anthony O'Connor off the ball to put himself in on O'Donnell's goal.

Moving into the City box, Humphrys rounded the City 'keeper before slotting home into the net.

Although the destination of the points looked to have been decided already, City did keep going in an attempt to try and register themselves on the scoresheet.

After being found in space in the box by Ball, Doyle fired at Bishop by his near post with an angled drive.

Minutes later, Miller fired across the face of the goal after being played in behind Southend's defences, but Taylor Moore was on hand to clear.

Eighteen minutes from the end, Knight-Percival then headed onto the roof of the net following Ball's cross into the box from the right.

A frustrating and challenging afternoon for those in claret and amber was completed from Southend's next venture forward, though, when Humphrys netted his second of the day.

Turning away from Knight-Percival, Humphrys curled home a delightful strike from the edge of the box that beat the despairing dive of O'Donnell in the City goal.

The Bantams still had a chance to score a consolation goal eleven minutes from the end when a Payne wide free-kick delivery landed at the feet of Akpan inside the box.

Akpan fired for goal but the effort deflected narrowly past the post.

After bringing on Connor Wood and Luca Colville - now back from injury -off the bench earlier in the encounter, Hopkin chose to use his third and final substitute three minutes from the end to hand a debut to Anderson.

Southend's own final change of the afternoon - young striker Charlie Kelman - had the last opening of the match a minute from the end of normal time.

As Southend broke forward on the counter-attack, fellow second half replacement Dru Yearwood found Kelman in the box, but his angled drive was pushed into the side-netting by O'Donnell.

Match line ups, updates and stats from the Southend game can be found via the Match Centre - HERE.