Gary Bowyer's Bantams were sadly forced to endure a thoroughly miserable afternoon at the Northern Commercials Stadium following a heavy home defeat at the hands of Blackpool.

Goals from Blackpool's Armand Gnanduillet (2), Matty Virtue and Chris Taylor helped the visitors collect a 4-1 success over a deflated City side.

David Ball netted a late consolation in injury time for the Bantams, but there was no hiding away from the fact that this was a very disappointing result for City to have to digest.

With the scoreline at 2-0 to Blackpool in the second period, City did have a great chance from the spot to pull themselves back into the contest, but Eoin Doyle's penalty was saved by Blackpool 'keeper Christoffer Mafoumbi.

Following last weekend's controversial late loss at Oxford United, Bowyer made two changes to his starting XI; Huddersfield Town loanees Jack Payne and Lewis O'Brien both coming back into the side.

As a result, Jacob Butterfield and former Tangerine Billy Clarke moved down to the bench.

There was little in the way of clear openings for either side in the early stages, as both sides felt their way into the encounter.

Eoin Doyle and David Ball saw efforts blocked from inside the box for City, while Gnanduillet headed wide from an Antony Evans corner at the other end. 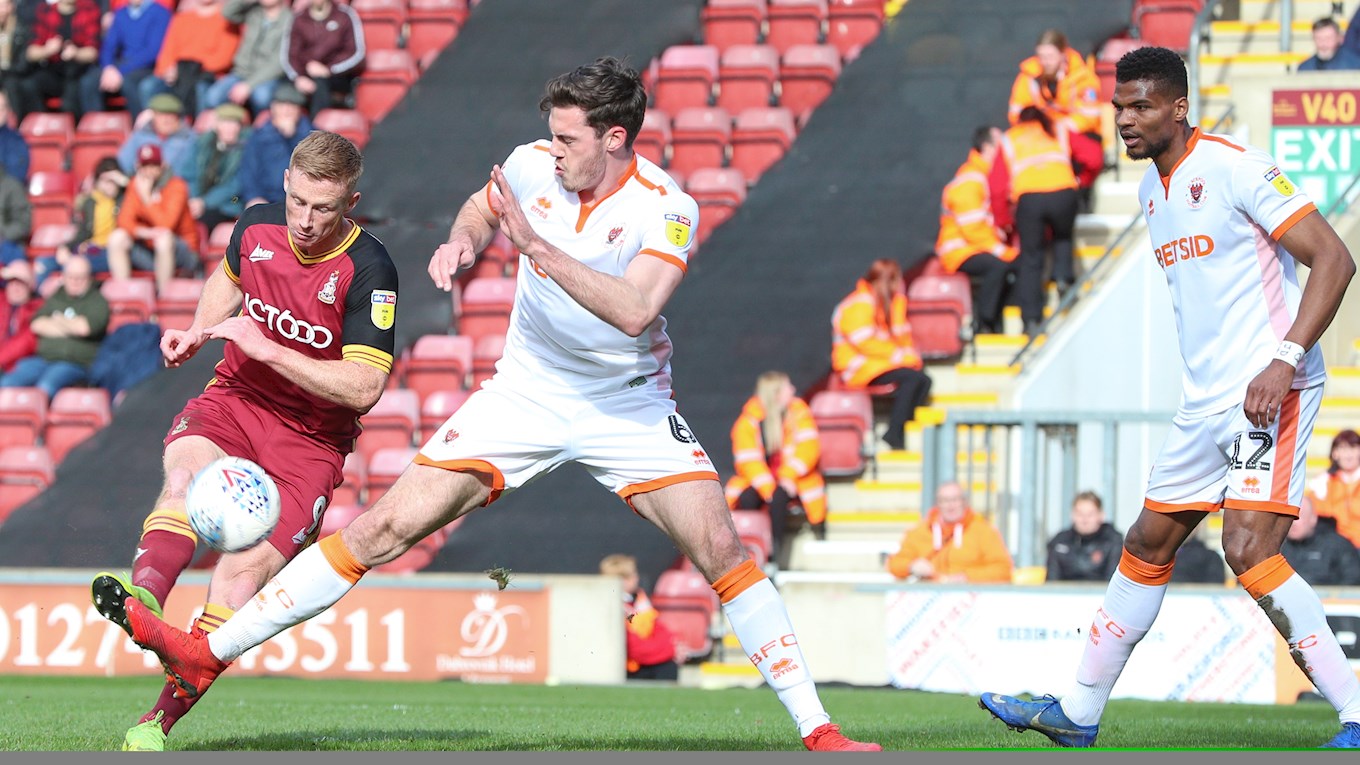 Slowly, though, Blackpool started to impose themselves more on the fixture and they took the lead midway through the first period.

Evans' cross from the left channel of the penalty area found Gnanduillet in the middle and the giant striker powered a header home into the far corner of the goal.

In fairness to City, they did respond strongly after the blow of conceding; forcing Blackpool back into their own half on several occasions.

A Payne corner dropped into the path of Ball inside the box just a couple of minutes later, but the striker's effort for goal was repelled by the diving frame of defender Ben Heneghan.

Despite City's territorial pressure, however, Blackpool could have netted a second on the break.

Delfouneso began the attack, driving forward with purpose from his own half, before teeing up and unmarked Liam Feeney inside City's penalty area.

Feeney struck for goal first time and the curling effort sailed not too far over the bar.

The Bantams did have one final opening before the interval, but Ball's volley across the six yard box was cleared away by Heneghan.

With City needing to get back into the contest, Bowyer responded at the break by introducing Butterfield for Payne.

The Bantams began the half on the front-foot, but they were rocked by a second Blackpool goal five minutes after the restart.

As a City attack broke down, Blackpool strode forward on the attack themselves.

Virtue moved towards the City box with the ball at his feet before firing for goal with an effort from outside the area that whistled into the net past O'Donnell's despairing dive.

Again, as they did after conceding the first goal, City came back at their visitors.

Ball teed up O'Brien for a shooting chance inside the box minutes later, but the midfielder's low drive was superbly tipped around the near post by Mafoumbi.

Mafoumbi then denied O'Brien again following another shot in the box from the youngster a minute or so later.

Ball was first onto the rebound following Mafoumbi's save and the attacker was brought down by Curtis Tilt. 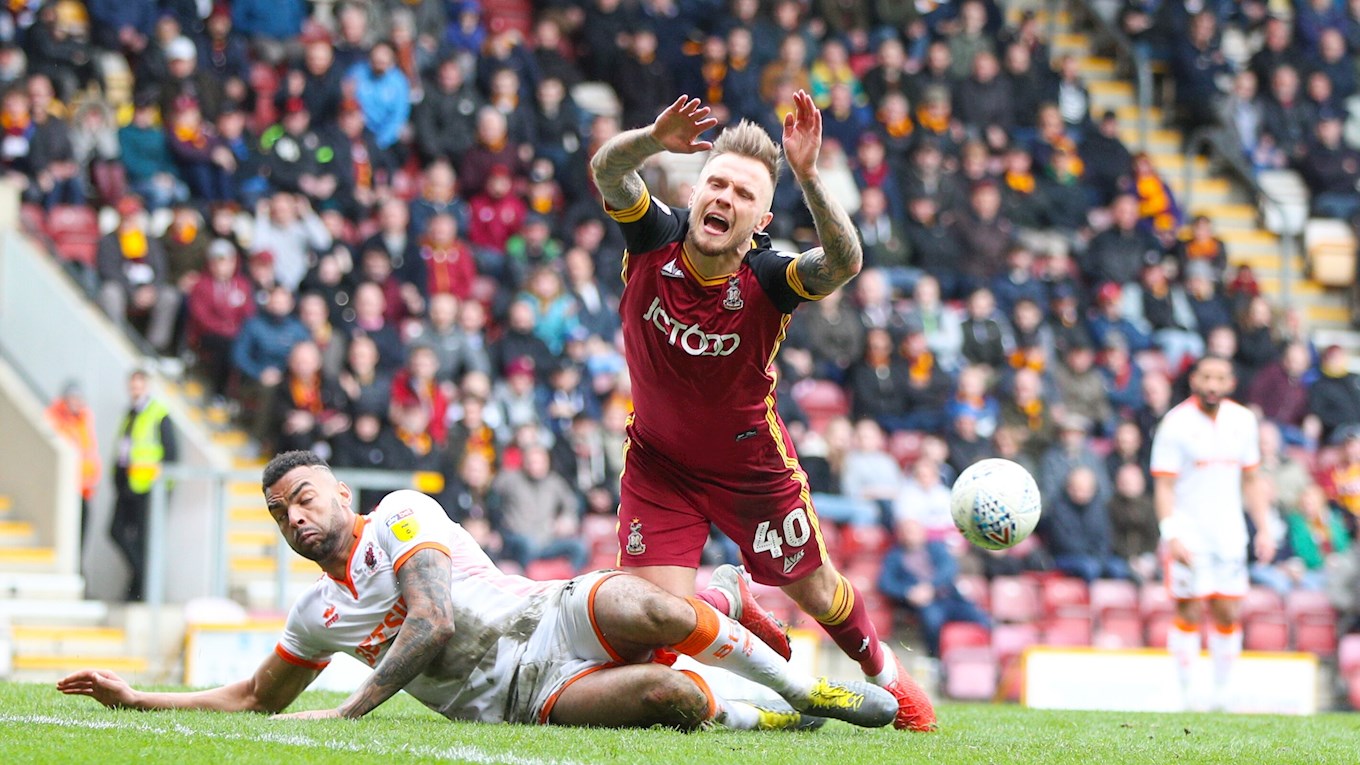 Referee Mr Antony Coggins pointed to the spot to give Bowyer's men a penalty.

Doyle took responsibility for the kick but his effort - a side-footed strike low to Mafoumbi's left - was parried behind for a corner by the visiting shot-stopper.

A goal then for City would have clearly been a big boost in their efforts to get back into the contest, with the penalty save perhaps seen as a possible turning point in the match.

Doyle had a chance to redeem himself soon after when Paul Caddis' cross into the box found the striker unmarked on the hour point, but the Irishman volleyed over from close range.

Twenty-two minutes from the end, however, Blackpool arguably put the contest beyond Bowyer's side.

Shortly after sub Harry Pritchard had prodded wide from a Marc Bola cross, Gnanduillet was on hand to head home via the inside of the far post after the forward had been found in the middle by Michael Nottingham.

Not for the first time during the afternoon, Ball and Doyle saw efforts blocked from inside the box shortly afterwards, but there was sadly a feeling around the ground that the game was up for the Bantams at this stage.

Blackpool actually rubbed further salt in City wounds ten minutes from the end when Delfouneso set up Taylor for the Tangerines' fourth.

A driving run into the box from Delfouneso began the trouble for City, and the former Aston Villa man then passed across for Taylor, who had only just come off the bench minutes earlier, to slam past O'Donnell.

After going close on more than one occasion during the game, City did eventually net a goal themselves in injury time though.

Caddis' cross from the right was headed in from close range by the far post by Ball.

Although it was a relief to see the Bantams register a goal in the fixture, it unfortunately couldn't mask what was a very difficult afternoon for City.

Match line-ups, stats and updates from the Blackpool fixture can be found via the Match Centre - HERE.