The Bantams came out on the wrong side of a 1-0 scoreline at a wet and windy Northern Commercials Stadium, as league leaders Luton Town edged a closely-fought encounter with Gary Bowyer's men.

Jack Stacey's opener in the fifteenth-minute proved the difference between the two sides; a goal that helped extend Luton's mammoth unbeaten run to a mightily impressive 24 games.

At times, Luton showed all of the quality that has deservedly taken them to the summit of the division.

Despite conceding in the first quarter of the match, however, Bowyer's Bantams refused to buckle under some first half pressure and they remained in the match right until the end.

Nathaniel Knight-Percival was inches away from converting by the far post at a corner from arguably City's best chance of the opening period.

As City took the game to the high-flying Hatters after the break, Knight-Percival then saw a decent shout for a penalty turned down when he appeared to be pulled over in the box.

David Ball had an opening to level things up for City fifteen minutes from the end when Paul Caddis' pass over the top but him in behind, but Luton 'keeper James Shea was out to make the vital block.

Following injuries to Kelvin Mellor and Calum Woods in Saturday's win over Peterborough United, Bowyer made two changes to his starting XI.

The weekend replacements - Caddis and Adam Chicksen - both coming in from the start this time.

There were also places on the bench for Omari Patrick, Josh Wright and Paudie O'Connor on Bowyer's teamsheet.

Luton enjoyed more of the ball in the opening stages of the match and after periods of territorial pressure, the visitors took the lead.

Andrew Shinnie picked the ball up deep inside City's half before slipping Stacey into space inside the Bantams' box.

Following Stacey's goal, Luton looked to try and really stamp their authority on the contest.

The pair who combined for the opener - Stacey and Shinnie - both wamed the hands of Richard O'Donnell with strikes soon after.

Shinnie then curled an effort past the far post on the twenty-minute mark.

Soon after, Luton threatened again from a corner when Sonny Bradley kept the ball alive in the box.

The ball eventually landed in the path of Elliot Lee, but the attacker's close range header was held by O'Donnell.

Although Luton were pushing and pushing at this stage, City showed all of the battling spirit required to hang on in.

Just under half an hour in, City actually nearly snuck their way level from a Jacob Butterfield corner.

The set-piece delivery was headed on Hope Akpan but Knight-Percival, who was lurking by the far post, missed out on finishing from close range by mere inches.

The final chance of an opening period largely controlled by the visitors also fell to Luton; James Collins heading over four minutes from the interval following James Justin's near post corner delivery.

Although City ended up running Luton close, the Hatters could have put themselves firmly in the driving seat early after the break when first half substitute Luke Berry's cross found an unmarked Danny Hylton.

Hylton's connected with the delivery but his header flashed narrowly wide of the near post.

At the other end, City's supporters were up in force when Bowyer's side kept an attack alive from a wide Butterfield free-kick delivery.

As the ball was recycled back into the middle by Jermaine Anderson, Knight-Percival went down in the box - seemingly dragged over by Justin- but referee Michael Salisbury waved away loud home protests for a spot-kick.

City were growing into the encounter as the second period progressed, but Luton remained a threat going forward when they got the opportunity.

James Collins - Luton's top scorer so far this season - twisted and turned past Anthony O'Connor before firing over with a rising drive from an angle inside the box.

City responded again though; Butterfield and Akpan firing over with decent efforts from outside the box.

The Bantams continued to probe away as the half progressed, with Luton seemingly more and more keen just purely to eat up time the closer the finishing line got into view.

Bowyer's side certainly didn't look the twenty-three places behind Luton that they currently are in the table, but the Bantams were struggling to break-through a Hatters defence that has only conceded 29 league goals this season - the second best defensive record in the division.

City did engineer one great opening fifteen minutes from the end of normal time when Caddis' long pass over the top put Ball in behind Luton's defence.

As Ball took the pass under control just outside the box, he seemed to receive a tug on his shirt by recovering Luton defender Dan Potts - something that possibly destablised him slightly - and an on-rushing Shea in the Luton goal was eventually able to make the block. 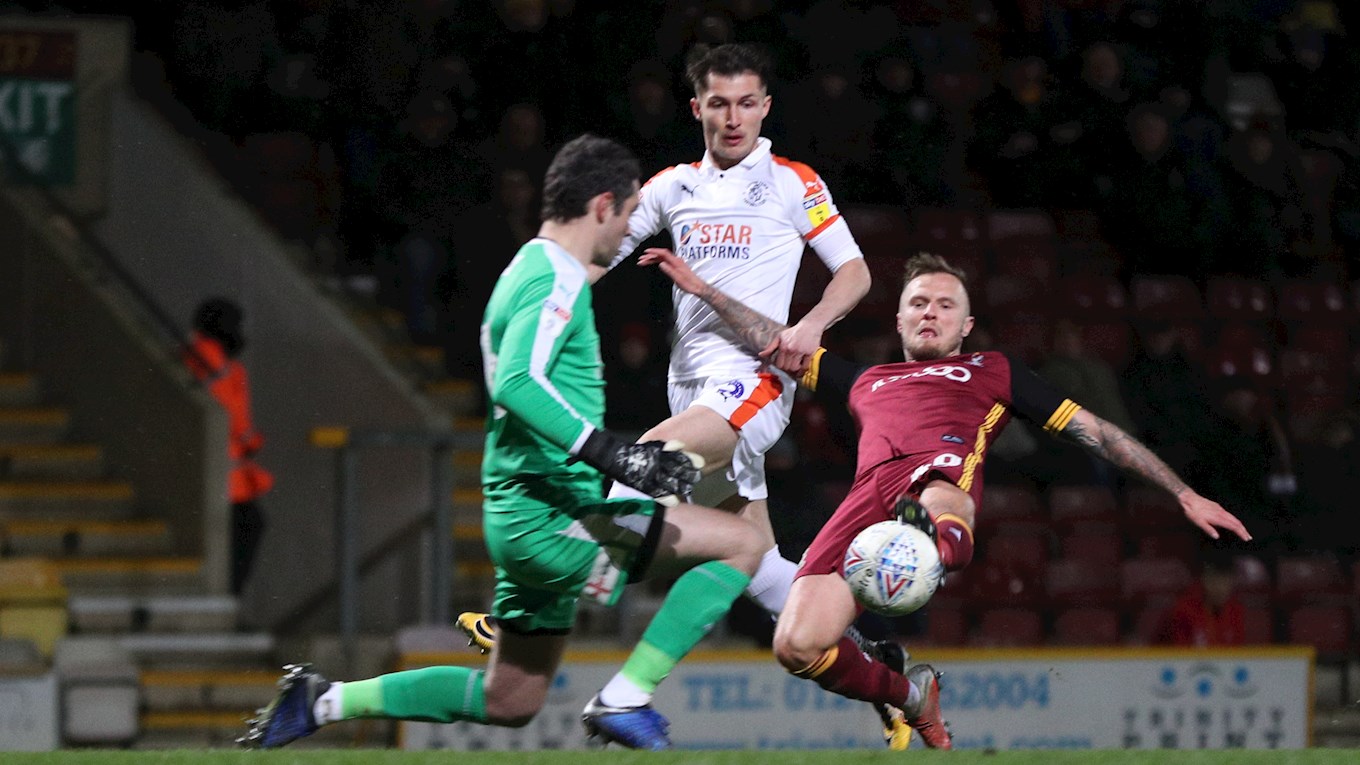 Bowyer brought on Billy Clarke for Ball soon after, and the Irishman flashed a header across goal shortly after coming on following Eoin Doyle's cross into the middle.

Doyle himself was then replaced minutes later by Omari Patrick; the young attacker making his first appearance of the season.

With City having been on the front-foot for large periods of the second half, Luton used their own substitutions to add numbers to their defensive and midfield ranks.

In fairness to the visitors, they did a commendable job of seeing out the remainder of the match; denying the Bantams the opportunity to create any true further scoring chances in the final minutes of the match.

City did have one final opportunity in the last minute of injury time, but Butterfield's free-kick delivery into the box was headed away by Matty Pearson.

The joyous scenes on the pitch and in the away section for those in Luton colours following the final whistle told you exactly how far City had pushed League One's current pace-setters.

Match line ups, stats and updates from the Luton game can be found via the Match Centre - HERE.