Goals from Jacob Butterfield, Eoin Doyle and Lewis O'Brien in the final twenty minutes or so of a highly-entertaining encounter saw Bowyer's Bantams run out 3-1 winners over Peterborough in his first game in charge.

Peterborough's Marcus Maddison netted a consolation goal late on following a debatable penalty award, but City weren't to be denied a deserved success after a hard-working display.

As a result of the changes, Jack Payne and Paul Caddis moved down to the bench; Connor Wood missing out altogether.

As you would expect with a new man in charge, City made a strong start to the contest.

Butterfield, who caught the eye with his skillful play all afternoon, struck the woodwork in just the eighth minute when his free-kick from outside the area hit the bar.

Despite their positive start, though, City had been given a let-off shortly before Butterfield's effort when Matt Godden was flagged offside after heading in from a Maddison cross.

On first glance, it looked a tight call, but the Bantams were clearly relieved to see the decision go their way.

Later in the half, David Ball - who, like strike-partner Doyle, never stopped running all game - nearly got a shot away deep inside the box following O'Brien's low cross into the area.

Ball had a couple of bites at the cherry, but Peterborough were eventually able to clear.

As the half progressed, it must be said that Peterborough slowly began to take control of possession and the flow of the match.

Peterborough probed away for the remainder of the half - looking for a way through - but City stuck to their task and kept themselves in the game.

Just over twenty minutes in, Jason Naismith got free on the byline by City's left flank, but Anthony O'Connor was on hand to make a vital block in the middle inside the six yard box.

A teasing cross from the ever-dangerous Maddison half an hour in was helped across the box by Joe Ward, but Nathaniel Knight-Percival was able to block Godden's goal-bound close range strike.

At the other end, Butterfield - who was seemingly at the heart of most of City's bright attacking moments in the match - tried his luck from just outside the box but the low strike was held by O'Malley. 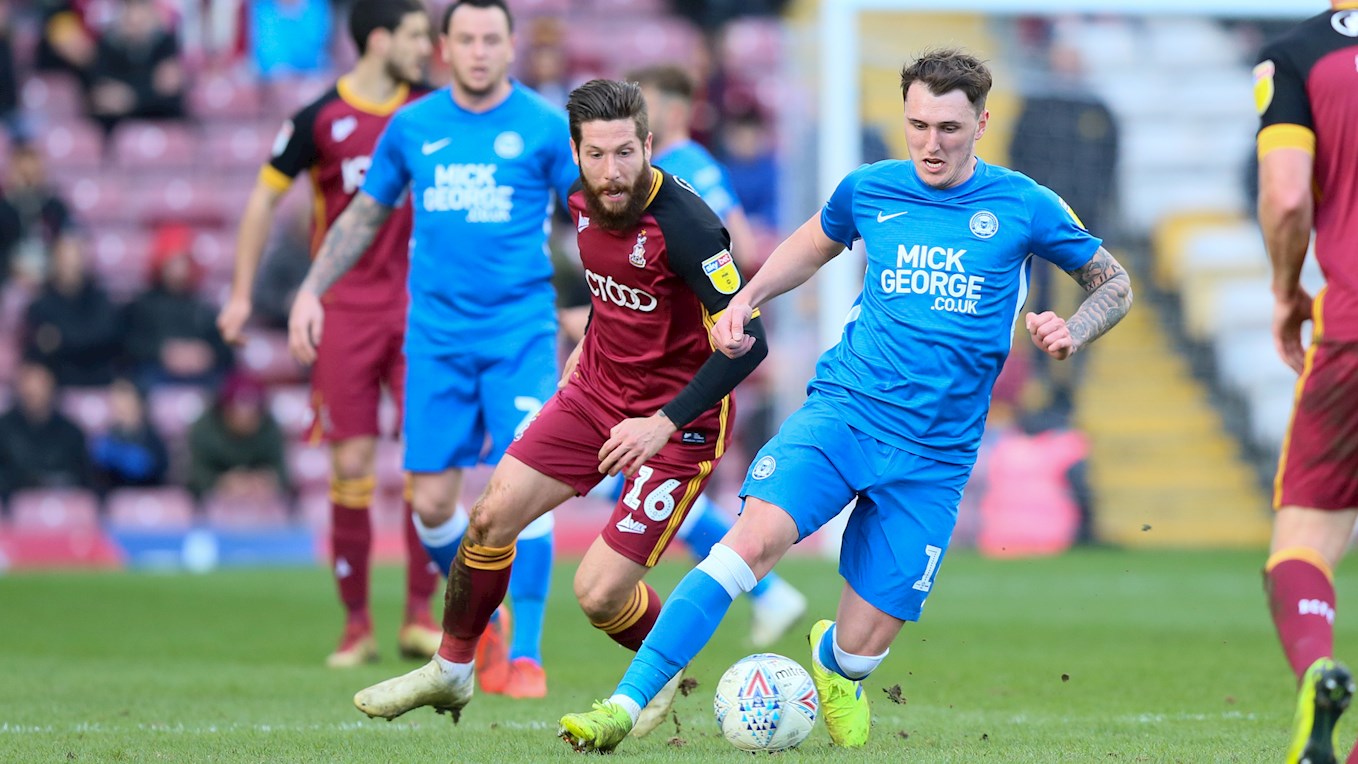 As the half moved towards the interval, Peterborough remained on the front foot and looked the more likely to make the break-through.

Both Maddison and Tomlin went for goal with efforts from inside the area from separate attacks, but blocks from O'Connor and Knight-Percival respectively quickly followed to repel those strikes.

Skipper-for-the-day Hope Akpan gave Peterborough something to think about defensively with a rising drive just over ten minutes before the break, but the Bantams would then be dealt a double injury blow before the half was out.

Firstly, Mellor had to be replaced by Caddis shortly before the interval after appearing to fall awkwardly and damaging his knee.

With City then lining up to defend a corner in first half injury time following a Knight-Percival block from a Godden strike in the area, Woods went down himself with an injury.

The defender, who was only just returning from injury in this match, had to be replaced by Adam Chicksen on the stroke of half time.

If Peterborough had enjoyed the better of the opening half, especially in the latter stages, City certainly stepped it up after the break to really take the game to their visitors.

After half chances for both sides in the opening exchanges following the restart, Ball was given a sniff of goal due to a slack pass in the Peterborough defence.

Ball picked up possession midway into Peterborough territory before driving towards O'Malley's area.

Closing Peterborough defenders meant Ball had to shoot before he made it into the box, however, and the striker's side-footed effort was held low to his left by O'Malley.

Attacking to the Kop in the second period, City's efforts after the interval certainly saw the volume levels rise up and up at Valley Parade.

City looked on the up as the game moved towards the hour point, and O'Malley had to be on hand to push a Butterfield free-kick from just outside the box around the post.

Soon after, Ball then had a shot held by O'Malley following Caddis' cross into the box from the right.

Despite City's strong play in the second period, however, Peterborough were always a threat going forward with the likes of Tomlin and Maddison in their attacking ranks.

Peterborough actually nearly snuck their way in front via a teasing cross from the latter towards the far post, but Daniel Lafferty's close range header was blocked by O'Donnell.

Maddison then went for goal himself from a free-kick from distance; the effort flicked off the City wall and O'Donnell had to turn the ball over.

With twenty minutes or normal time remaining though, it was City who earned the all-important break-through goal via Man of the Match Butterfield.

The on-loan Derby County midfielder took aim from just outside the box and the low drive rattled into the bottom corner by O'Malley's near post.

The goal understandably sparked joyous scenes in the home stands, and it vitally gave Bowyer's men something to hang on to in the final quarter of the match.

Peterborough responded to going a goal behind by instantly bringing on attackers Ivan Toney and George Cooper.

City had to deal with a fair amount of defensive work following Peterborough's offensive alterations, but they were actually able to double their lead six minutes before the end of normal time.

With Peterborough pushing men forward, Akpan's clearance over the top gave Ball something to chase onto.

Ball managed to take possession towards the edge of the box before Doyle took over.

The Irishman drove into the area and then fired low into the corner with a left-footed strike that wrong-footed O'Malley.

As O'Brien picked up the ball just outside the area, the midfielder played a neat one-two with Doyle before moving into the box.

O'Brien seemed to scuff a shot into the ground and the effort bounced past O'Malley via a touch off Lafferty and into the corner of the net.

The goal put the icing the cake for Bantams, but sadly City weren't able to claim a clean sheet their hard-working efforts deserved.

In the final stages ahead of injury time, referee Mr Donohue awarded a spot-kick for Peterborough following a challenge by Caddis in the box on Maddison.

Caddis seemed to cleanly win the ball from Maddison, but the match official stuck with his decision to give the penalty despite home protests.

O'Donnell guessed right from the resulting penalty kick, but the pace and precision of Maddison's strike meant the effort still found the corner.

The manner of the goal was a slight disappointment for the Bantams on the day, but it was still no reason at all for it to take the shine off a morale-boosting success for Bowyer's side.

Match line-ups, updates and stats from the Peterborough fixture can be found via the Match Centre - HERE.