Promotion-chasing Portsmouth proved too much for the Bantams, as City suffered a heavy defeat at Fratton Park.

Hope Akpan did give City a glimmer of a chance, pulling a goal back to briefly make the scoreline 2-1 in the second period, but the Bantams were unable to kick on as Portsmouth rallied to see off the match with some gusto.

Taking charge of the team for the first time following David Hopkin's departure at the start of the week, caretaker manager Martin Drury made two changes to City's starting XI.

With Adam Chicksen's partner due to give birth to their first child this weekend, Connor Wood stepped into his place at left back.

The other alteration to the side from last Saturday's loss at Walsall saw Akpan recalled for Billy Clarke.

Newly-named skipper Paul Caddis worn the toss ahead of kick off, with the Scot instantly switching Portsmouth around so they would not have the luxury of attacking to their main Kop behind the goal in the second half.

Playing towards their own fans then in the first perioid instead, Portsmouth hit the woodwork in the sixth-minute.

Evans' clipped ball into the middle from the left found Oli Hawkins at the far post and the towering striker's downward header hit the outside of the post.

Portsmouth were on the attack again soon after, but Close fired wide from inside the box after another Evans cross was headed down into the mix by Ronan Curtis.

After that strong start from the hosts, City did respond at the other end of the pitch. 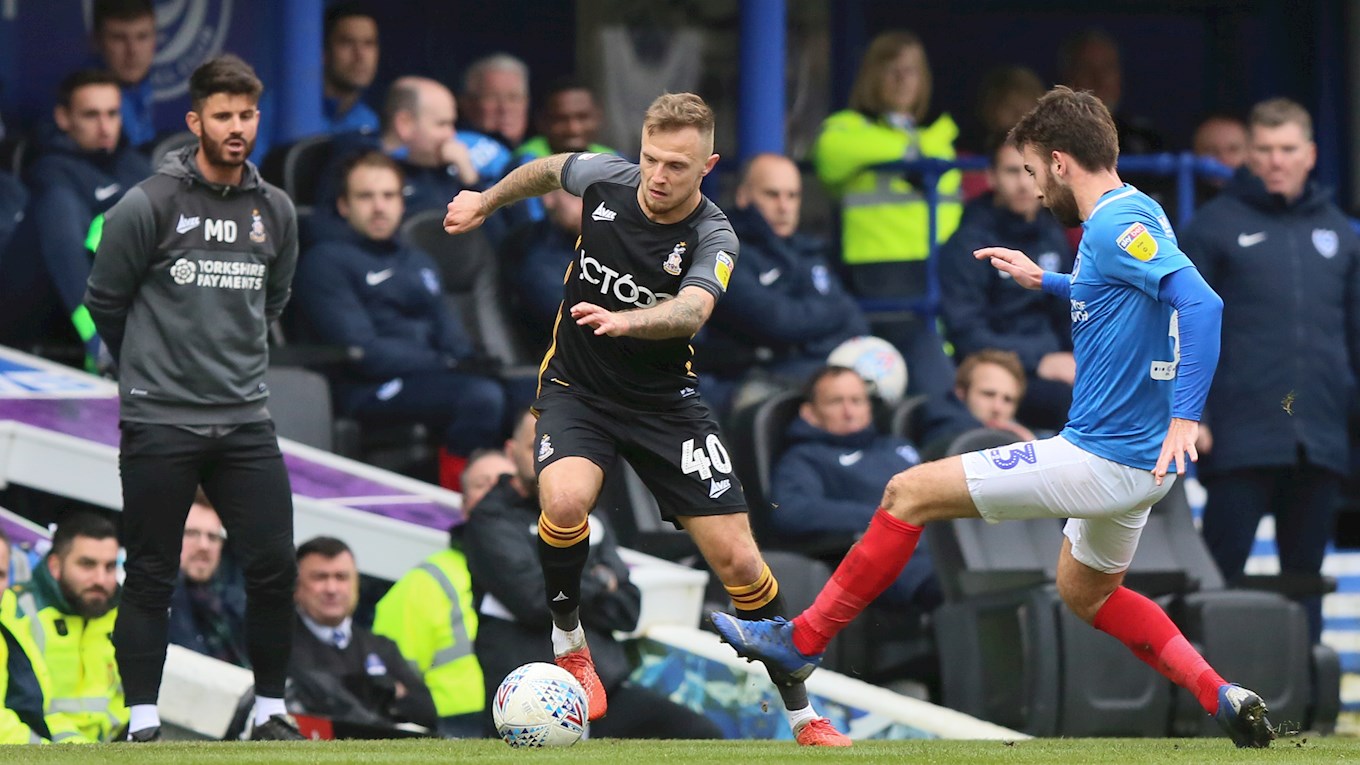 David Ball curled an effort wide from the edge of the box, while later in the half Eoin Doyle's strike for goal was blocked by Matt Clarke after a neat move involving the Irish striker and Lewis O'Brien.

With the game fairly evenly-balanced then, Portsmouth were handed a chance to take the lead midway through the half when Anthony O'Connor was adjudged to pulled Clarke back in the box from an Evans corner.

On first glance, the decision looked harsh, but it crucially gave Portsmouth the opportunity to make the all-important break-through.

Evans himself took responsibility for the resulting spot-kick and the former Bantams attacker rifled the penalty into the top corner, sending Richard O'Donnell the wrong way in the process.

Following Evans' opener, Portsmouth grew in confidence and dominated for the remainder of the first period.

Hawkins and Curtis failed to test O'Donnell from Portsmouth attacks around the half hour mark.

Portsmouth went even closer around ten minutes before the interval when those two home attackers combined. 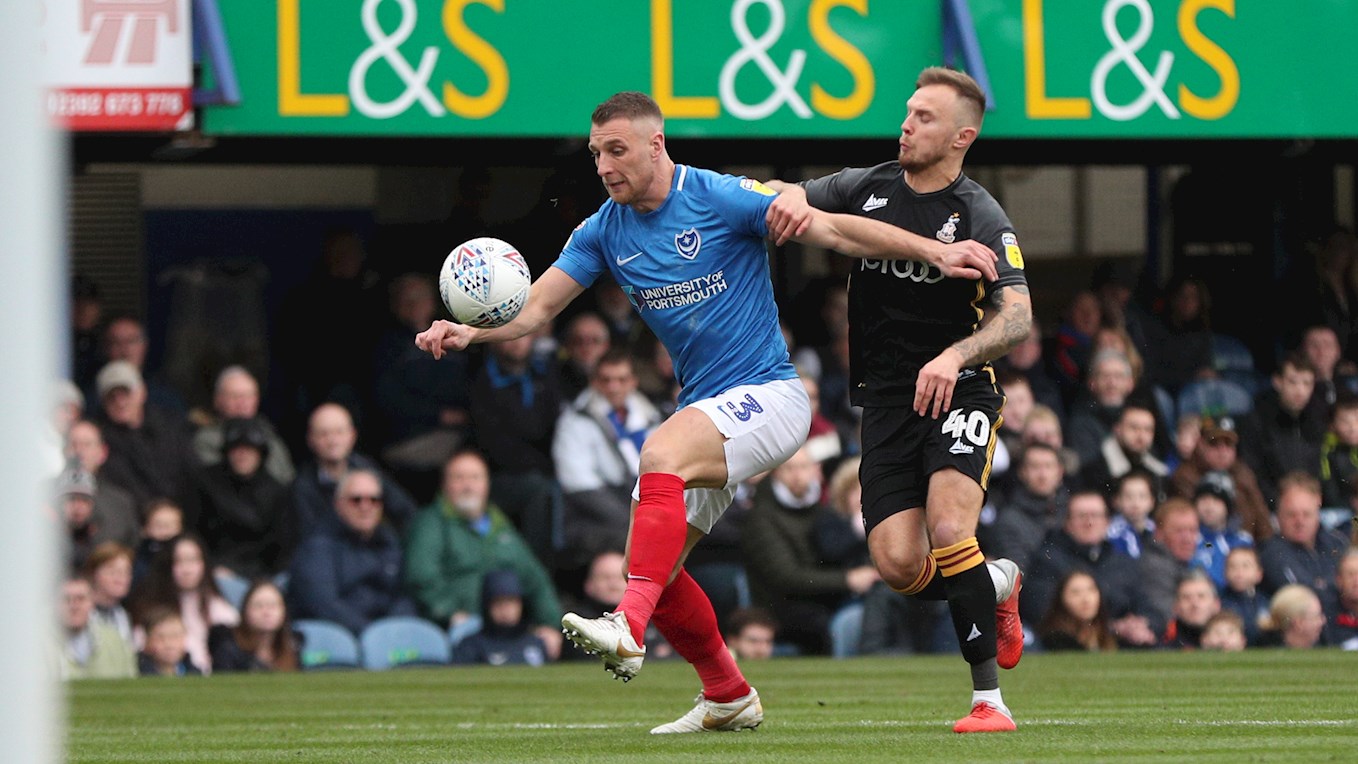 Hawkins put Curtis through on O'Donnell's goal with only Caddis for company.

Caddis did enough to prevent Curtis from getting a strike on goal. Lowe behind him did fire in a shot, however, but the effort was well saved by the legs of O'Donnell.

With four minutes to go before the break, though, Portsmouth did double their advantage through another Bantams old boy.

From an Evans corner delivery, Curtis saw a close range effort cleared off the line by Caddis.

Naylor, who enjoyed a spell on loan with City during the 2012/2013 season, was on hand, however, to fire in on the rebound.

City ended the half with Ball having a shot blocked from the edge of the box and Payne firing wide from just outside the area.

The interval saw an injured Caddis replaced by Kelvin Mellor.

Going into the second period, the contest was halted briefly around the hour point when a drone was spotted over Fratton Park.

Referee Oliver Langford looked set to take the players off the pitch at one stage, but the drone eventually passed and play could continue.

City took advantage of the break to bring on George Miller for Wood, with the change also resulting in O'Brien moving to left back.

Initially the change seemed to work for the Bantams.

Akpan warmed the hands of Pompey 'keeper Craig MacGillivray with a rising drive from just outside the box.

City then went one better from the following set-piece. With the Bantams playing the corner short, Payne put O'Brien in crossing space down the left flank.

O'Brien stood the ball up from the byline and Mellor was on hand to head across goal for Akpan to fire in from close range.

The comeback looked like it could be potentially on at this stage, but with City throwing men forward, they sadly left themselves exposed at the back.

Just minutes after Akpan's goal, Lee Brown was given plenty of room to cross from the left and Lowe was on hand to chest the ball into the net from inside the six yard box.

Worse was to come unfortunately for the Bantams shortly afterwards.

Another cross from the left - this time from Curtis - found Evans in space in the box.

Evans struck for goal on the half volley and the effort was diverted home via the out-stretched leg of Close.

City's third and final change of the afternoon came soon after; Billy Clarke coming on for Payne.

Portsmouth were eventually forced to use their full allocation of subs as well following an accidential clash of heads between Clarke and Nathan Thompson.

Pompey, who had earlier lost Hawkins to injury in between their third and fourth goals, initially replaced Thompson with fellow full back Anton Walkes.

Despite commendable work from City's own physio team, Clarke was himself forced to come off shortly after play eventually resumed some five or so minutes later.

Clarke - complete with traditional white headband - did try to carry on at first, but it seems the cut to his head was too severe.

Portsmouth looked to finish the game on a high despite their injury distruption, and O'Donnell was required to make a smart save after Lowe had been teed up in the box by Evans following a home counter-attack.

Three minutes before the end of normal time City's hosts for the afternoon sadly were able to rub further salt into Bradford wounds by netting a fifth goal on a difficult day for the Bantams.

A cross from the left deflected into the path of Close just inside the area and the midfielder proceeded to grab his second goal of the day by firing low into the far bottom corner via a well-taken strike.

Largely due to the drone stoppage and the head injuries to Thompson and Clarke, as many as ten minutes of injury time followed.

Having already used all of their subs, Portsmouth actually ended the match with ten men when Curtis limped off six minutes into the extended period of over time.

City did have a couple of openings to register again on the scoresheet in the dying moments of the match, but Jacob Butterfield fired over with a drive from distance and Eoin Doyle hit straight at MacGillivray from inside the box.

The final chance of the match came seconds before the final whistle, when Walkes curled narrowly over the bar with a decent effort from just outside the area.

Match line ups, action and stats from the Portsmouth game can be found via the Match Centre - HERE.